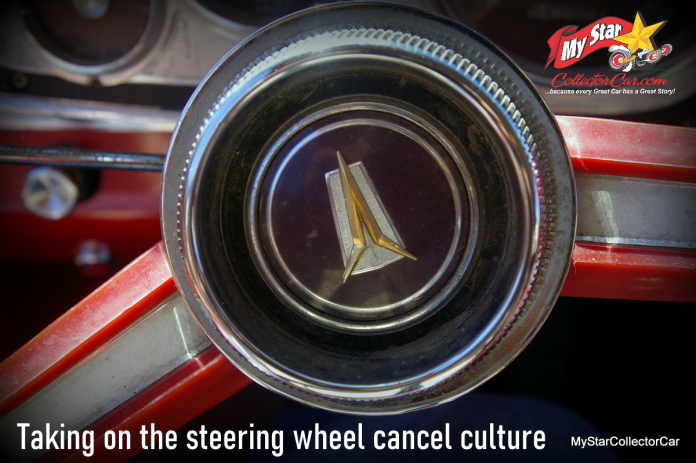 To be honest, I don’t really understand cancel culture if the term refers to the 2020 movement to banish dissenting opinions and history, but I learned about the cancel part of a turn signal mechanism in a big way when I tackled a project to replace the cancel cam in a 57-year-old car’s signal light system.

Most car guys are aware of a turn signal cancel cam’s role in a car.

A blinking signal light with no turn in sight is puzzling to other drivers and a goldmine for marginally funny comedians who want to score a few laughter points off old guys behind the wheel of a big sedan with the blinkers on in continuous fashion. Senility jokes aside, a worn-out signal light cancel cam has the potential for disaster if another driver guesses that a signal to turn means the car is indeed turning at the next corner.

I was concerned about the absence of a working turn signal cancel cam and armed with more than enough misplaced cockiness to replace the faulty part in the old car’s steering column. After all, it was a simple piece of plastic that fit nicely under the steering wheel when some of the camouflage was removed over top of the cam.

The removal process went well — so even a dolt like me could see the role played by the cancel cam in the signal light system. The horn cover twisted off, the support and grounding plate for the horn was screwed off, while the steering wheel came off with a little help from a puller.

Some of the broken parts were due to the age of the vehicle, but most of them were due to my high level of incompetence and overzealous use of brute force in an automotive project. The turn signal arm was intact and no worse for the wear.

However, the old cancel cam was not easy to budge, but eventually I was able to pry it loose — along with a few of the movable electric components of the turn signal unit. During the prying process, one of the electric contact pieces was accidentally launched into a low orbit and bounced off me before it hit the floor. This was the exact moment when things got complicated because I had no idea how the piece fit back into the turn signal unit.

The next step was pretty obvious: I guessed wrong about the part’s placement — many times. I never saw its original position, so I repeated this electrical guessing game for the next several hours while I went through a long trial and error process with heavy emphasis on the error part.

The task seemed so simple when I started the repair, but my tune had changed dramatically several hours later in the day. I thought about chasing down a replacement signal light unit and using hand signals until I found one-or running the car over the nearest cliff. Both ideas had merit at that point, but I soldiered on.

Eventually I discovered the part that flew out of the signal light electrical unit needed to be positioned in the opposite direction (an incredibly subtle difference for chimps with wrenches like me) and the entire unit fit like a glove with the new cancel cam. Even better, every signal light worked properly, the horn worked properly, and the new cancel cam worked like a charm.