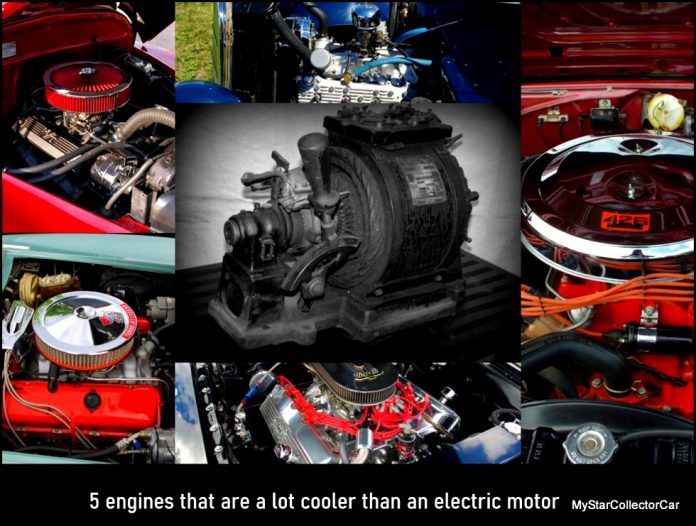 The electric car gets more press than 100 Hollywood celebrities combined, because it’s the future of the automotive industry – according to the media.

They did it by offering a Tesla electric motor that will retrofit to any small block Chevy application, so your beloved old Chevelle can now boast it can be green and quiet at the same time. I’m not sold on the electric car just yet, because I live in a sub-arctic environment where -40 is a very real possibility for several months. I’m even less sold on the electric car migration to the classic car hobby, so here are five engines that are far cooler than a Tesla electric motor.

Number one is the Ford flathead. The flattie was the first V-8 built for the average guy, so a lot of average guys bought them. Flatties were the perfect engine choice in the infancy of the street rod culture.

You could find them at any wrecking yard; speed equipment was affordable for the flatties and they had their own distinctive sound – something you’ll never get with a Tesla.

Number two is the Elephant – the 426 cubic inch 2nd generation Hemi from Mother Mopar. They are massive and scary – the Tesla is the opposite.

You could successfully argue the Tesla could thump an Elephant in a street race, but the difference is found in the gut reaction. A hemi will overwhelm you and punch you in the face with its noise and brute force – a Tesla won’t. In contrast, Tesla will give you a quiet trip – it’s like the difference between riding inside or outside a Boeing 757.

Number three is the 427 Chevy. The 427 came in many different forms, but all of them were cooler than a Tesla. The 427 found in a vintage Vette not only put you in orbit – its resale value in 2020 puts you in a different tax bracket.

Second Gen Vettes with the 427 option are so scary few owners have the courage to really pound on them. That massive engine in that lightweight package is more than most guys can handle – it’s like poking an angry lion with a stick…the noise and the fury are the last thing you’ll ever see.

Number four is the 427 Ford cammer. This is another monster – its legend grew when the cammer was outlawed at the track, but you’ll still find them in select vehicles.

The cammers are very visual because they are so big when they’re shoehorned into an engine compartment. They dominate the space in a way that a Tesla never will, plus they sound as angry as they look. You could weigh 103 pounds soaking wet, but that cammer will turn you into an MMA heavyweight champ. The Tesla will turn you into a skinny nerd with an electric car.

Number five is the engine Tesla is trying to replace – the 350 Chevy small block. They’re cost effective and they build cheap power. The Tesla replacement will cost you $50,000 (including batteries) so the math is simple.