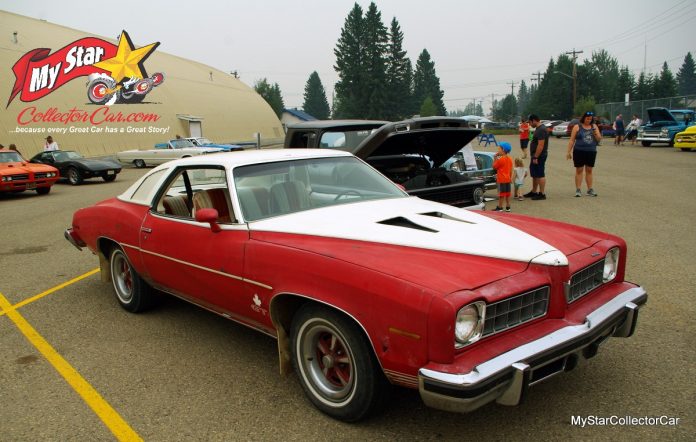 Highly restored cars are a double-edged sword because they end up so valuable you can’t or won’t drive them in an everyday setting.

Willie Dejarlais is the proud owner of this rare Pontiac (under 50 built). These cars were built to salute the Crazy Canuck World Cup team in 1975 as a fundraiser promotion. He is a Pontiac fanatic so he’s well aware of the scarcity behind this Canada Cup car, but that only part of the equation. The other part of the equation is the fun factor.

Willie equates fun factor with how much time he spends behind the wheel of his Le Mans because that’s why he bought this car. Willie found the car over eight years ago in a pole barn–it had been there for many years and the motor and wiring harness had disappeared after thieves made the Pontiac a target.

The Le Mans was a slam dunk purchase for Willie because he recognized this disco era survivor was a unique car. Willie found a donor 350 from a 1979 Chevy truck, but it turned out to be a dog, so it didn’t last very long. The next engine (another 350) came from a Canadian 1970 Pontiac 2+2 and the result was a much stronger motor under the hood of the Poncho.

Willie is a hands-on guy, so he took on all the work because the steering column was another casualty of the theft and he had to swap out the carb. His basic goal was to “go through it and make sure everything was safe” because he travels with his family–his only motivation was to have a reliable, trouble-free road car.

Eight years later, the Le Mans has been a champ for Willie because he drives it until the snow flies. He even takes it camping because he said he’s “not too worried about taking it into the bush”. The miles have added up over the years and that’s why Willie hasn’t taken the car to the next level. He often has to explain the term “Cup car” to people because “most people don’t know what it is”.

The Pontiac wears its years well because it was off the road for so many years, but it needs some cosmetic work. There is some minor rust, and the car shows a few battle scars, but this Le Mans has good bones. The interior is faded but still sound–these are things that Willie wants to address but he’s realistic about the car. He knows the days of carefree driving would be over the day the car came out of the body shop.

The carefree driving part of the equation is important to Willie because excursions in the Poncho involve several generations in the Desjarlais family. Willie’s grandson is a regular passenger in the car, and he fits into the future as Willie explained.