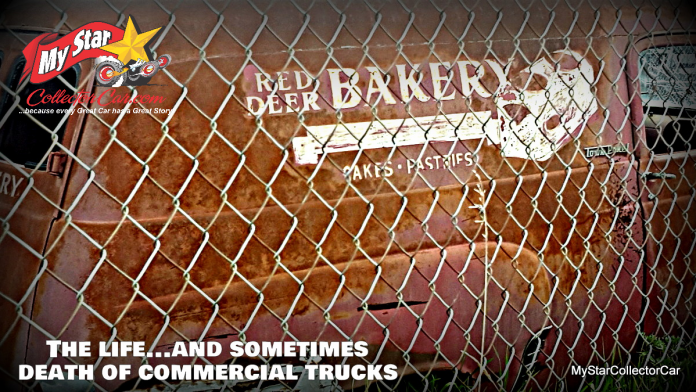 I spotted an old bakery truck in a wrecking yard and my first thought was simple – how can I turn this old van into an interesting MyStarCollectorCar piece?

The answer was obvious.

The first example is the bakery truck. It’s a Dodge van and it’s still in decent shape but it’s on the brink of disaster because it’s in a salvage/recycling yard and the key word is ‘recycle’.

Hopefully, somebody sees the potential in this old classic but fate can be cruel to used-up old work vans.

The second example is an old Chevy truck. It was used as a delivery vehicle for a local bottling company and there’s little doubt it served as a reliable workhorse – until the day it was less reliable.

The picture was taken in a farmer’s field over ten years ago and this truck is probably still there, but it had clearly retired sometime between the Richard Nixon and Gerald Ford era. The only thing left was the cab and a few assorted parts.

The third example shows two different outcomes from the same company. These bright yellow Alberta Government Telephone (AGT) trucks were all over the place in Alberta before AGT was privatized.

This ’67 Ford tool truck was saved from oblivion and now spends its time in semi-retirement at a museum where everyone can see a piece of AGT history in living color.

The AGT Dodge van has a much less certain future because it wasn’t in a museum.

It was in a wrecking yard that was in the process of being cleared out back in 2016, so there’s a good chance this van is now a stove…or a Toyota.

The fourth example is a ’77 Ford. This was another working truck for a drilling company, and it was still in decent shape in the same yard as the Dodge van. It looks like it could be right back on the job site if you pumped up the tires and added new gas.

This truck’s biggest sin was obvious…it wasn’t a pickup. This Ford would have been long gone if it wasn’t set up as a commercial utility vehicle. Four years later, its future is far less certain.

The fifth example has a far more certain future. This ’66 Chevy pickup is a survivor and it was a delivery truck for a farm implement company in Medicine Hat, Alberta, Canada.

The right guy bought it because he kept the well-worn exterior of the truck intact and focused on what was underneath the skin. It’s lowered and now it sports a newer Chevy small block under the hood.

This ’66 Chevy pickup was the subject of a MyStar article back in January, 2012 and fortunately it’s still in action as a driver/real world truck.

The odds are against most commercial trucks in post-retirement but as you can see — some have bright futures.