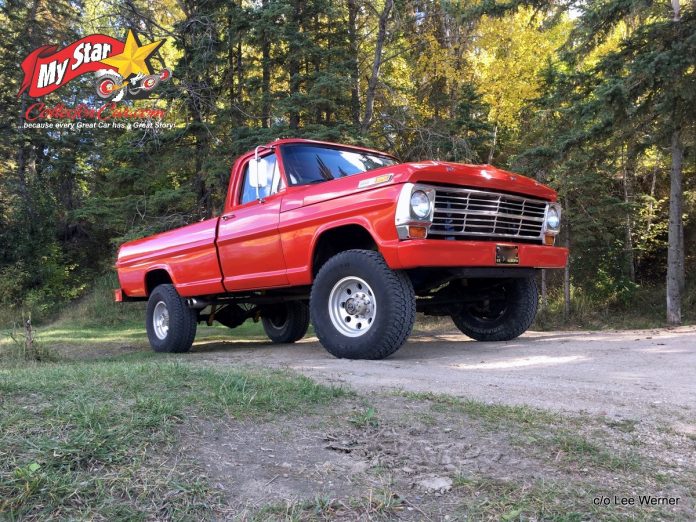 Consequently, the ’69 Ford pickup has been a part of Lee’s life for many decades, primarily as a farm truck. Lee pondered how many bales the truck hauled during its long run on the family farm and recalled how well it performed in a first gear idle during the hauling task. He also recalled how he learned to drive behind the wheel of the Ford, an experience that comes at a young age for farm kids.

Years of farm work are hard on trucks. They are typically used up and retired from active use because they can no longer handle the tough conditions, but Lee was given an opportunity to restore the family Ford back to its original glory.

Lee was interested in auto body repair after high school and began a career in the trade, but then decided to head in a different direction. However, Lee used his body work skills and decided to apply them to the family Ford’s restoration process.

The truck was still on the road when Lee became its latest owner, so he drove it during the 1990s until 1999 when he began the restoration process. Lee noted the truck’s registration ended in ’99, therefore he was able to pinpoint the start of the restoration project.

The truck’s original box had been beaten to death by hard farm work, so Lee decided to purchase a 1972 Ford box because it was in remarkable shape. Devoted Ford truck fans will likely notice the rear side marker lights on the ’72 Ford donor truck’s box.

Nevertheless, Lee’s goal was to retain as much of the original truck as possible during the restoration, including its engine and transmission. The ’69 Ford’s factory 360 cubic inch engine and four-speed manual transmission are still the same combination that were in this pickup when it left the factory.

Lee noted the truck’s original exhaust manifolds were beyond repair, so he replaced them with headers, then he added a creative touch to the exhaust system when Lee installed subtle NASCAR-like side pipes to the truck. However, he drew the line at adding power steering because “it’s got a big steering wheel”, in Lee’s words, plus he did not want to stray too far from original.

The truck retains its factory four-wheel drive system for the same reason, including its manual locking hubs that require a twist to engage the four-wheel drive. Lee noted the list of original equipment in his radio delete truck include West Coast mirrors and chrome front grille.

He added a 1995 Ford front seat for an enhanced comfort factor, along with a large 1972 Ford tailgate emblem for an extra bling factor.

However, the most important part of the long restoration process for Lee was simple: do not change the history of the truck, a very important factor when Lee was finally able to take the previous owner (his dad) for a ride in the family Ford shortly after he reintroduced it to the road in late summer of 2021. Lee’s father was thrilled by the ride in his old truck.

A WALK THROUGH THE PAST IN AN OLD SCHOOL CAR CROP