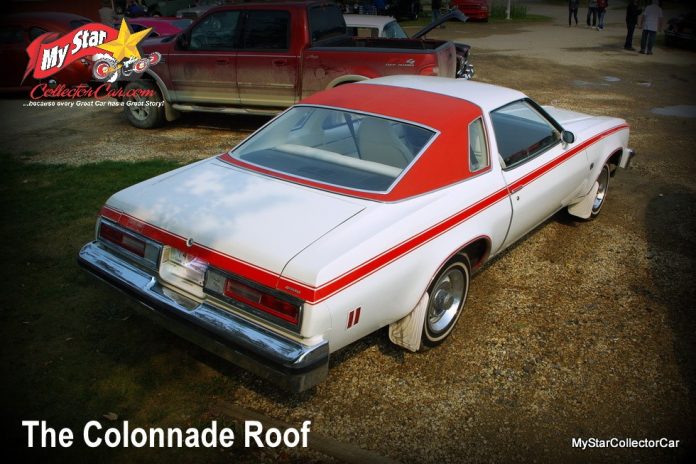 We at MyStarCollectorCar never had to dig into the Webster’s Dictionary definition for “colonnade” because we already linked the word’s original meaning to ancient Greek architecture involving a row of structural columns around buildings.

Instead, we want to celebrate General Motors’ version of the colonnade design, namely their 1973-77 car models with a unique B-pillar style. The 1970s was an era when iron-fisted automotive legislation was on the horizon, largely due to fuel shortages and rising gas prices at the pump.

Today’s world of runaway fuel prices and acute shortages is eerily familiar to that era. Just substitute yesterday’s colonnade rooflines for today’s electric car fad and you know the drill. There was a politically manipulated fuel shortage in the 1970s and a similarly manipulated fuel shortage in 2022 The difference today is shortages are created to bully car buyers into electric car purchases whereas the mere threat of more proposed 1970s automotive bureaucracy motivated General Motors to design new rooflines for their 1973-77 models.

The dawn of the Colonnade roofline was General Motors’ reaction to pending legislation regarding the traditional hardtop roof on domestic cars. The proposed law would ban hardtop roof designs on Detroit’s cars because of their rollover safety issues.

A hardtop was originally known as a hardtop convertible because it did not have a B pillar (the pillar that connects the car’s roof and lower body and is located behind the front passengers) and consequently provided a more open view of the outside world from inside the car. The car’s metal roof was the hardtop part of the equation during that bygone B pillar-free automotive era.

The hardtop models were stylish, cool, and deadly compared to the sedan versions because the sedans had B-pillars and more structural strength in the event of a rollover. The sedan versions’ B-pillar meant the cars were less likely to become flattops than flimsier hardtops after a rollover under the same calamitous conditions.

New automotive laws enacted in the early 1970s included neutered V-8 engines choked off with smog equipment and 5 mph bumpers that looked as out of place as a Yankee fan at a Red Sox game in terms of body design. The automotive legislators’ pace was furious, even if there was precious little time for domestic car builders to get ahead of the curve and build efficiency or style into the equation.

General Motors wanted to get ahead of the lawmakers’ curve when it introduced its Colonnade roof designs for their A Body (intermediate-sized) cars in 1973-even though the lawmakers ultimately did not force their hand on stronger B pillar-inclusive body designs.

The result was a unique blend of style that showcased the rear roof design in conjunction with the car’s B pillar. The fact General Motors chose to market its sporty new B pillar models as its Colonnade editions suggests they were very happy with their new rooflines.

The Colonnades were offered in two roof designs. One was a hybrid of the fastback with large B pillars and plenty of glass between it and the C pillars. The other was an upscale style that featured a smaller rectangular-ish glass surface and a larger C pillar in the mix.  GM’s Colonnade design was phased out of their A body’s style cues after a five-year production run that ended in 1977.