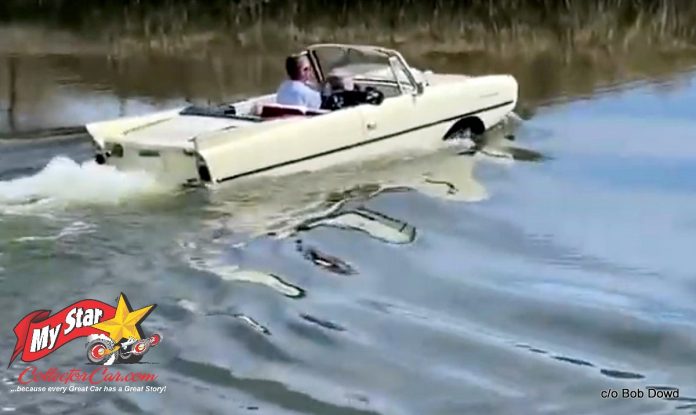 No vehicle ever captured a kid’s interest like an Amphicar when these unusual vehicles debuted in 1961, a trend that shows no signs of abating 60 years later.

The main reason is Amphicars had a link with frogs because both could exist on both land and water. A car that could also be driven on water went directly to rock star status for kids when it debuted on roads and lakes in 1961. The Amphicar may have answered the bell for kids as a practical solution to driving and boating needs, but their parents did not view the cars in the same light. They were a limited production vehicle because Amphicars had a limited market since kids did not make major purchase decisions for their parents in most 1960s-era households.

Eventually Baby Boomer kids became adults and some of them still carried the same torch for Amphicars, including Bob Dowd, the happy owner of a 1961 Amphicar 770. Bear in mind only 3046 Amphicars were shipped to North American between 1961 and ’67, although their parent company (Amphicar Corporation) in Germany built another 832 cars in 1968.

Bob was an impressionable young car kid during the 1960s, so it will come as no surprise the Amphicar left a big imprint on him over the years. Ownership of an Amphicar was always on the table for Bob, so he kept an eye on the market until 2020 when Bob finally found his Amphicar.

The owner was a reputable car guy based in California, but the little car/boat combination was in Illinois with a restorer who also had a solid reputation in the Amphicar community. The result was a 60-year-old car that was both seaworthy and road-ready when Bob became its owner.

Bob purchased the car in the autumn of 2020 and was able get it transported to his home in western Canada, although the time of year meant he would have to wait until this past summer to truly enjoy the Amphicar.

The big attraction (then and now for Bob) was the Amphicar’s ability to navigate in the water, so he took the car on a lake to test its seaworthiness. Bob described the maiden voyage in these terms; “The first trip down the ramp you really start leaning back and expect it (the Amphicar) to sink”.

Bob’s Amphicar is a first-year model that was only the 116th vehicle built in 1961, but he has no plans to sell his childhood dream car. Instead, he will continue to enjoy his car on both land and water whenever either opportunity presents itself to Bob.