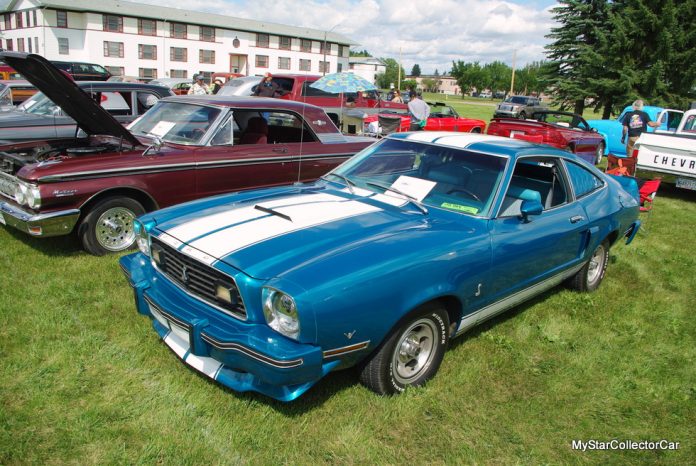 Dave Hoffman has been a quarter mile car builder since the early 1960s-even before he served his country in Viet Nam with the 101st Airborne.

He still has a hot rod heart and continues to build his Fords into road and track beasts.

Dave’s Ford stable includes a 1977 Mustang II Cobra tribute car that has also been categorized as a rare order vehicle by its Marti Report. In fact, this Mustang II is the only model of its kind that was ordered with its specific options. The kicker in the equation was the aluminum wheels that are not found on any other factory order Mustang II in 1977.

The car was purchased by its original owner from a local Ford dealership after the serviceman who originally ordered the car was transferred to eastern Canada. Its first owner was able to buy the Mustang II from the dealership when the original buyer’s deal fell through and she owned the car until Dave purchased the car in the early 1990s.

The original order made by the serviceman included the Cobra tribute badges, according to Dave.

Dave is a retired tradesman in the heating field and met the first owner through a job at her place. The Mustang II had its striking blue paint job and its 302 small block engine also caught Dave’s attention and he was able to negotiate a sale with the first owner.

Dave had an interesting game plan for his Mustang II because he wanted to make it into both a street and a track car.

Dave told MyStarCollectorCar his 302 performance upgrade was likely the first 347 Stroker conversion built in Canada and included a Boss 351 crankshaft built to fit the block. The major horsepower boost required better traction so Dave put Panhard bars on the back end to handle the extra ponies at the track.

As mentioned, Dave had an interesting game plan for his Mustang II because he also wanted to retain as much originality as possible during the project. The car still has its original C-4 automatic transmission, although it now sports a shift kit because Dave raced the Mustang II for 17 years.

The Mustang ran a 12:90 quarter mile at around 106 mph-and Dave mentioned that he drove the car to the track-even though its 3:55 rear end meant the car was working pretty hard on the highway.

The performance improvements included a free-breathing header system with cutouts for the track.

Dave told MyStarCollectorCar his rare Mustang II “could be put back to stock form” if that was a desired game plan, but he likes to bring out the best in his four-wheeled beasts so he will continue to drive the car on the street.

His originality angle included the interior because Dave only replaced the material on the driver’s seat. Dave even retained the manufacturer’s door gaps on the Mustang II after he noticed the same gaps on another ‘77 Mustang 11 built only ten days before his car.

Dave added a few other features, including a rear window valence and side scoops into the mix because he likes the look on his Mustang II. The add-ons are also easily removable in case the next owner wants to transform the car back into an original model.

These days Dave is building his 1977 Mustang II memories on the road instead of the track and he wouldn’t have it any other way.