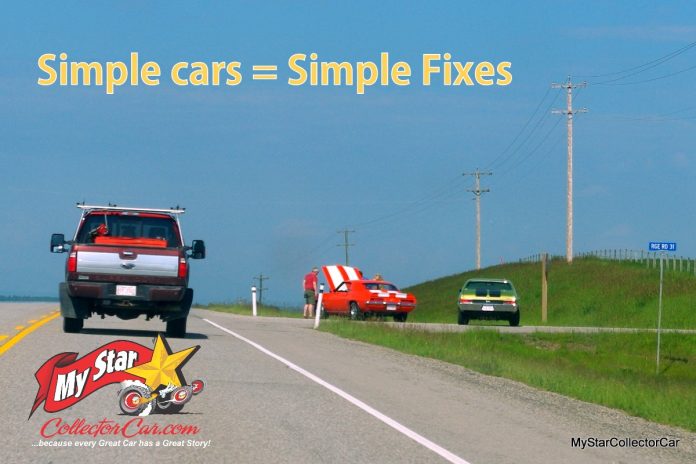 The “KISS Principle” may be an unfamiliar term for some of our MyStarCollectorCar readers.

KISS in this context does not refer to a gaudy rock act from the 1970s, it is an acronym for “Keep it simple, Stupid”, although KISS the rock band’s best years are also firmly rooted in the past, not unlike retro rides from the past when it comes to blasts from the past.

Recently we spotted a stalled truck in traffic that was a newish vehicle by comparison to our long list of retro rides featured on the electronic pages of MyStarCollectorCar. The pickup was likely built in the 21st century, but not likely in the past 10 years by our reckoning. The truck was likely past its best-before date and in a netherworld between beater and collector in terms of appeal, but it left the factory with more electronic equipment than Apollo 11 and now the computerized components were well on their way to the great parts bin in the sky.

Something in that truck had finally given up the ghost and now its driver was forced to open its hood and hope against hope that he could spot the problem and fix it, a scenario roughly equivalent to winning a billion-dollar lottery. The stranded driver’s road adventure may have been solved if he had a scanner that zeroed in on the problem along with a truck bed filled with expensive electronic replacement parts, but that did not appear to be the case.

Fortunately, he had one vital component that is a very popular solution for 21st century motorists: a cell phone with access to a towing service. The cell phone is the most valuable tool possessed by modern motorists and solves their vehicle breakdown issues in most cases.

Such was not the case for motorists from a bygone era because landline phones were tethered to stationary places like farmhouses ten miles from the breakdown or payphones 50 blocks away from the stranded driver.

The upside to this grim breakdown scenario from yesteryear is vehicles were less complicated and drivers were more aware of their vehicles’ basic function and had a fighting chance to solve the problem if they were car guys.

Most cars from any era require fuel, fire and air–with all due respect to the current electric car cult that is trying to push its way into the hearts and minds of drivers-despite their enormous flaws. Fortunately, most people still enjoy the efficiency of internal combustion engine vehicles that follow the fuel-fire-and-air game, but this concept was much simpler during a bygone era, so any competent car guy would go through a much shorter checklist to find the problem.

WHAT YOUR VINTAGE VEHICLE SAYS ABOUT YOUR PERSONALITY