There is no doubt car guys are born with car guy DNA but the extent isn’t clear until you look at the big family tree.

My dad was a closet car guy because he had a few odd, impractical rides kicking around the family acreage until my Mom shut the party down.

The car DNA ran deep on the sibling side too, because virtually every brother had or has an interest in old iron.

My Uncle Keith was a surprise car guy.

Uncle Keith was the cool uncle in a family full of really good uncles because he was less like an uncle and more like an older brother. He broke the ice when I was in my early 20s when he insisted on being called Keith because Uncle Keith “made him feel old“. My dad had mixed feelings about that shift in formality but it wasn’t his call.

Keith Sutherland was a member of the RCMP for 23 years and he retired as a Sergeant. He told great cop stories because he worked a job in small town Alberta that was partly Sheriff Andy Taylor of Mayberry and partly very serious police work.

The range in Keith’s stories went from stopping a rival hockey team’s bus and seizing their beer for a psychological advantage in the playoffs to a massive manhunt for one of Canada’s worst mass murderers.

Keith even had a sense of humor about the manhunt after the mass murderer ran his roadblock and a rookie started pumping shots at the fleeing felon.

Keith knew the limitations of the pea-shooter handguns they used so when the rookie ran out of ammo Keith asked him,“Are you done yet?“. The best part of the story came when Keith explained how the rookie became the RCMP Commissioner – the highest ranking member in the organization.

He was even posted in my hometown of Red Deer in the mid-1950s and he used to laugh about how his night shift was foot patrol to check businesses and see if they were locked. That was because they only had one patrol car at the time so it didn’t matter if the month was January – Keith was on foot.

Red Deer is pushing 100,000 now and its crime rate has changed significantly from Keith’s era when a guy walking around jiggling doorknobs was a major crime prevention tool.

Keith held one secret back until I was in my late twenties…he was a hardcore car guy. We were at a family reunion in the 1980s and I told him I was looking for a project car. That’s when Keith confessed he was a gear head.

How this topic never came up before is a mystery because to that point the only car talk was about how the RCMP bought what they could get cheap so patrol cars were stripped-down three-on-the-tree six cylinder two-door sedans. He laughed about how they topped out at about 75-80 miles per hour so “high-speed chase” was a relative term.

Keith admitted at the time he currently owned a number of old rides  and one of his favorite was a 1953 Meteor. He liked this car because it took him back to a kinder, gentler era when he was a rookie RCMP member in a simpler world. He was realistic about the car and when it became less practical to own, his biggest concern was that it went to a guy who respected the car. 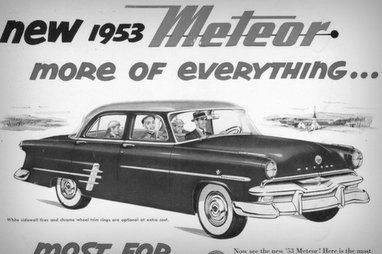 Keith had another classic that he loved because it was a vintage road trip ride. This one was a 1965 Cadillac and Keith loved how stable and comfortable it felt on the open road so he put a lot of time in behind the wheel of the big Caddy.

Keith knew the pain, effort and expense that went into a major project so he was excited to see it but he didn’t want to risk any time behind the wheel so he rode with me. He was worried that if anything happened, he would be the guy driving, so no matter what the circumstances he preferred to be a passenger and not risk a ’59 Plymouth catastrophe.

That’s the kind of respect real car guys have for other car guys.

Despite that major connection with an infamous day, I’ll always remember Keith more as the cool uncle with the cool cars.

MSCC MARCH 2 STAR OF THE WEEK: THIS IS THE NAME...