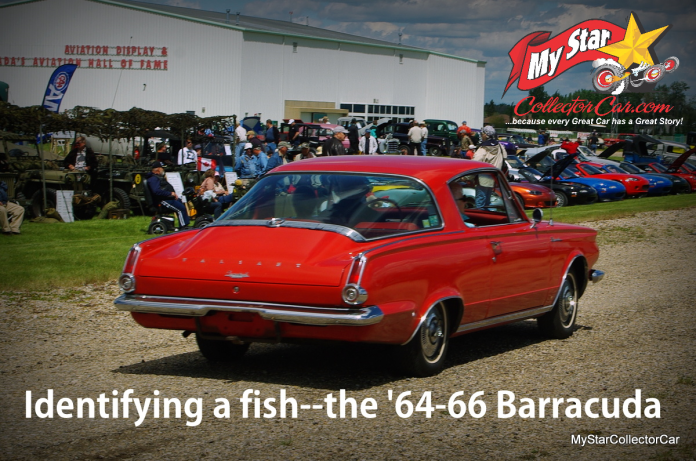 Car guy trivia is a topic that may even cause fistfights.

For example, the first pony car was not even a pony–let alone a Ford Mustang.

The 1964 Barracuda was essentially an unusually styled Valiant that sported a rear window big enough to provide ample sunshine for a bumper crop of geraniums because of its unorthodox design. In short, the Mopar boys took a compact Valiant and added a giant fastback rear window to it. People either loved or hated the first-generation Barracuda–there was little middle ground when it came to the radical style of these cars.

The Chrysler team were committed to their new pony car, so they ran with the same basic design for three model years. Nevertheless, a visual comparison would give 1966 Barracudas an edge in uniqueness compared to the earlier 1964 and ’65 models in the Mopar family.

The most noteworthy difference between the ’66 Barracuda and the 1964/65 models was the front end of the newer model. A 1966 Plymouth Barracuda had a different grille with a checkered pattern while the ‘64/65 models had a horizontal bar through the grille. Additionally, the rear deck of the ’66 Barracuda had subtle differences, including slight changes to the taillight base that went from round to rectangular in 1966.

However, the identification game gets considerably harder when one is forced to pick out a 1964 Barracuda in a lineup of 1965 Barracudas. It is a little like attempting to identify one identical twin from another one because both cars and twins require more than a superficial assessment to make the correct choice.

Car-wise, a major difference is obvious inside the Barracuda because a factory option automatic transmission will provide the correct answer, mainly because of a major shift (pun intended) in direction by Chrysler.

The push-button automatic transmission era that began in 1956 ended in 1964 at Chrysler when they decided to put some distance between the famous 1950s Forward Look finned models and the then-new 1965 Mopars.

Another difference? The instrument cluster on the 1964 models had three separate circular gauges in the panel beside the large speedometer while the 1965 Barracudas housed the gauges in one large circle to the right of the equally large circular speedometer housing. Therefore, a peek inside the car will reveal whether it’s a 1964 or ’65 Barracuda.

The exterior of the 1964 and ’65 Barracudas is virtually identical, except for the Valiant logo on the lower right rear deck of the 1964 edition and the slightly longer ‘A’ in the cursive Barracuda script on the side of the ’64 and early 1965 models.

The overall style of the 1964-66 Barracuda models may have been strikingly similar, but there are enough differences to identify them if they are still in stock form.