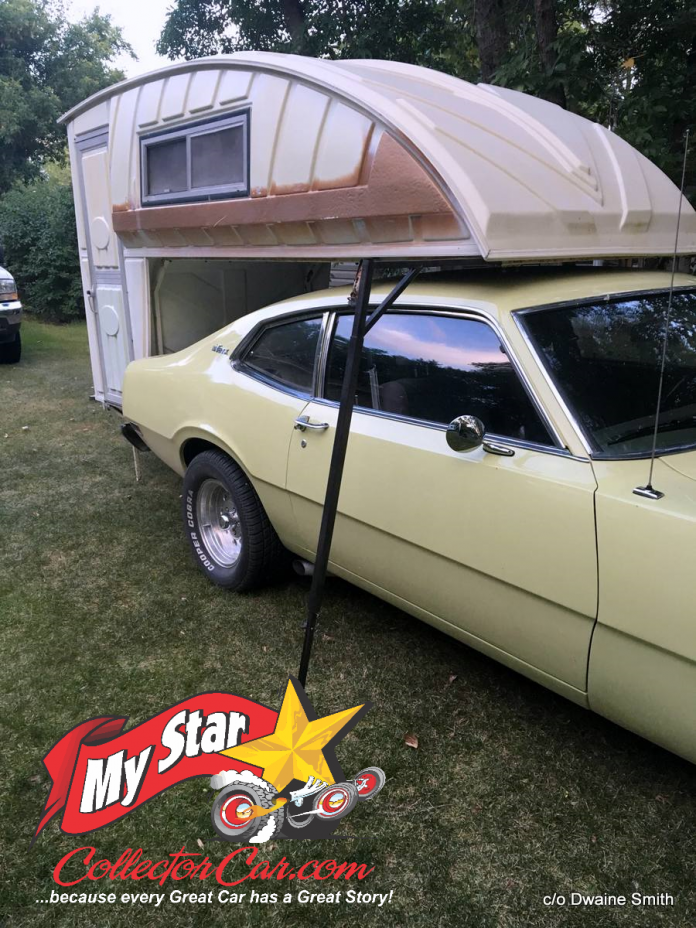 A 1975 Ford Maverick is a story unto itself, given the fact they are not a common sight on the streets in 2021, but a Maverick with a camping unit is rare in that Loch Ness Monster/Bigfoot way.

Just for the record, the ’75 Maverick has undergone a facelift over the past winter and now resembles a 1971 version with a striking Grabber Green Mustang paint job that matches his classic Mustang. The Maverick project included his daughter’s help with welding and will be the subject of a future MyStarCollectorCar article since she is an enthusiastic hands-on car girl and was more than willing to work with her father Dwaine on the Maverick.

The connection between Dwaine and his daughter is obvious when it comes to the Maverick, but the camper unit connects Dwaine with his late father Allan, a man who was a large influence on him.

Allan bought the camper back in the 1970s when Dwaine was still an impressionable kid and the unit has been with the family ever since that day. The camper unit was built by Mid Canada Plastics in Melville, Saskatchewan Canada and was the creation of company founder Hugh Vassos, an innovative entrepreneur who also created the community’s first drive-in theater and brought musical legends like Louis Armstrong and Johnny Cash to Melville.

It was clear Hugh Vassos spent his entire life answering a series of bold “what-if?” questions, including the development of a camper unit that would fit on most cars- just as long as they had drip rails on the roof and a trailer pitch package on the back end, according to Dwaine. The trailer hitch assembly was a resting point for the rear end of the camper, plus it offered access to electrical connections for the rear light assembly on the camper, since the car’s lights were likely hidden from view.

The camper was compact and light enough to fit on a car but had limited occupancy, given its size and aerodynamics. Dwaine grew up with four other siblings, so road adventures were limited by his family’s size, but the camper left a huge impression upon Dwaine because of its connection to his dad.

Allan passed away in 2009 and Dwaine wanted to honor his father’s memory as the new owner of the car camper. The 1975 Maverick was a perfect candidate as the carrier vehicle for the camper because both were built during the 1970s.

The result is a big conversation piece whenever Dwaine attends a car show or any event that puts the Maverick and its Hitch Hiker camper in the public eye. Dwaine added, “I’ve had people follow me home on three occasions”, a testimony to their strong curiosity about the car camper.

As mentioned earlier, Ford built plenty of Mavericks during their 1970-77 production run, but few of these cars are still on the road in ’21. However, Mid Canada Plastics only built about 250 Hitch Hiker car camper units during its brief production run in the early 1970s, so they are even rarer in the 21st century.