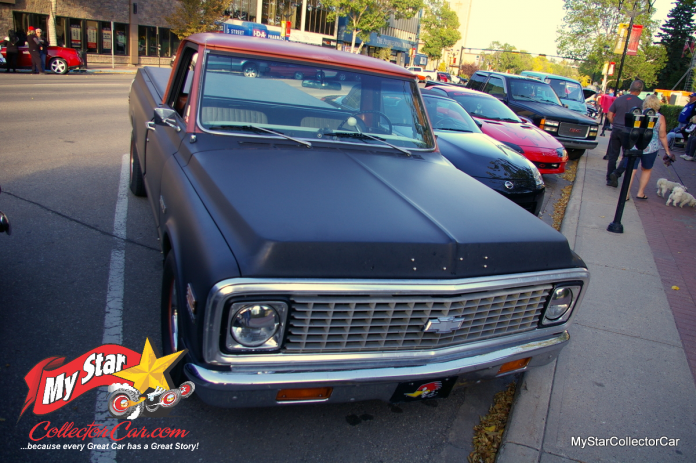 The 1967-72 versions followed this trend and produced some of the most sought-after vintage domestic trucks in the hobby over their five- year production run.

In 2009, Deryl purchased a 1971 Chevy Cheyenne 10 pickup truck after he was approached by the seller at a car show. Deryl concluded that he “must have a sign over his head that says I will buy old trucks” because people seem to pick him out of a crowd.

The ’71 Cheyenne faced an uncertain future after a long stint in storage (mostly outdoors) for several decades and its then-current custodian was running out of options for the truck.

Deryl was able to buy the truck at a reasonable price and initially thought the old Chevy would become a parts vehicle for his 1967 GM pickup. However, Deryl changed his mind when he got the truck back to his farm and decided to put it back on the road since it was in better-than-parts-truck shape.

He added, “Once they’re gone-they’re gone” and Deryl is more likely to save a vehicle than crush it for this reason. The the truck was in reasonably good shape, but Deryl replaced the original engine with a 1975 Chevelle 350 small block because the factory engine had a coolant leak-likely due to a cracked block in Deryl’s opinion.

The entire process to bring the ’71 Chevy pickup back on the road only took about two weeks, according to Deryl. He has subsequently put about 118,000 miles on the truck and uses it as a daily driver whenever possible, even in the winter.

Deryl is a practical man, likely due to his farming background, so he kept his cost factor at a minimum when he sprayed his truck with rust paint about five years ago. He is pleased with the results and likes the paint’s durability during the past 5 years.

Deryl also installed new bench seat material on his ’71 Chevy and likes the look of the refurbished seat.

The ’71 Chevy pickup has become one of Deryl’s favorite vehicles because of its ability to deliver a reliable and stylish mode of transportation any time the spirit moves him. Deryl added his 50-year-old truck is more than capable of running with the big dogs on modern roads.

In fact, he recalled a driving escapade when a fast-moving vehicle caught up to him on a four-lane highway and Deryl discovered the car was a Lamborghini. Deryl decided to push the exotic car a little in the fast lane and discovered the Lambo driver would not concede the fast lane to him, so Deryl passed him in the slow lane — a move that completely surprised the Italian road rocket’s driver.