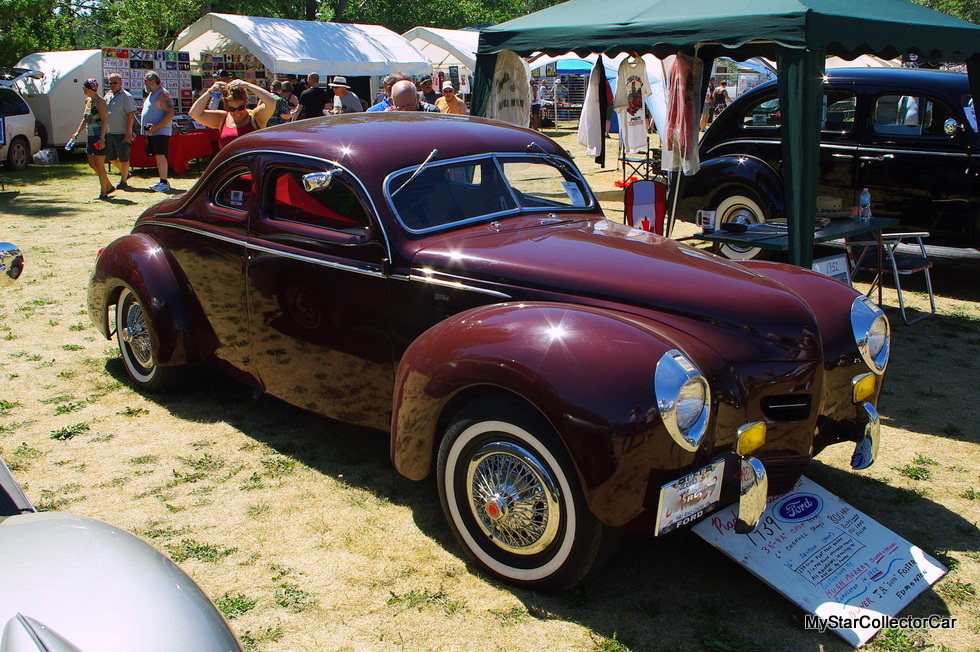 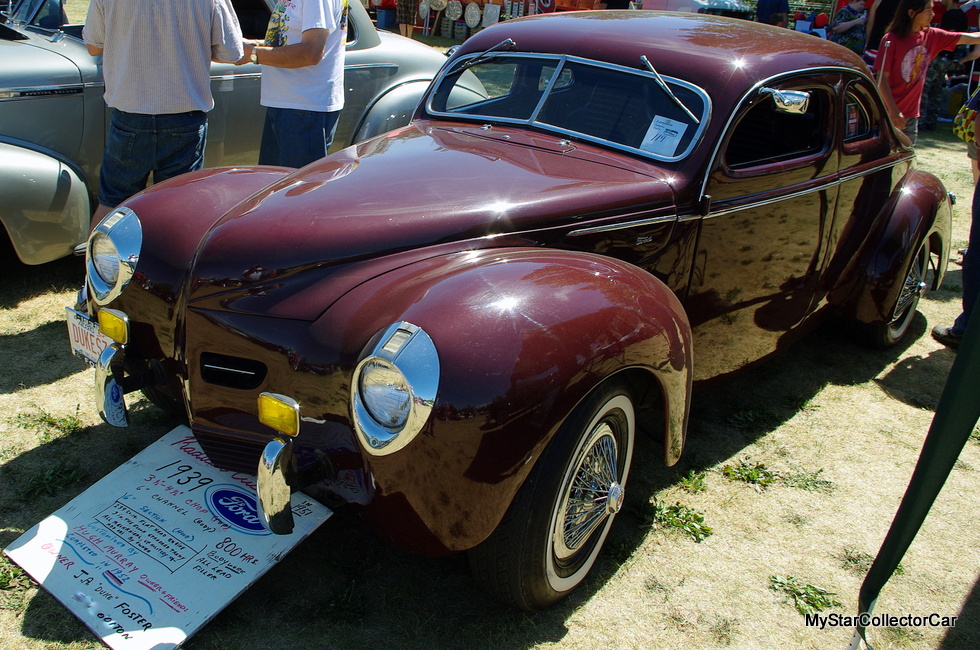 The old car hobby is all about a look back at what really made us happy back in the carefree days of youth.

“Few guys actually hold on to their beloved ride for 63 years and even fewer are a living legend like Jim “Duke” Foster.”

Duke was a car guy long before the term “car guy” even existed. He hauled them to the track and hauled them home with this ’39 Ford on the old two-lane highway between Calgary and Edmonton where it meandered through “every little town” as he recalled. 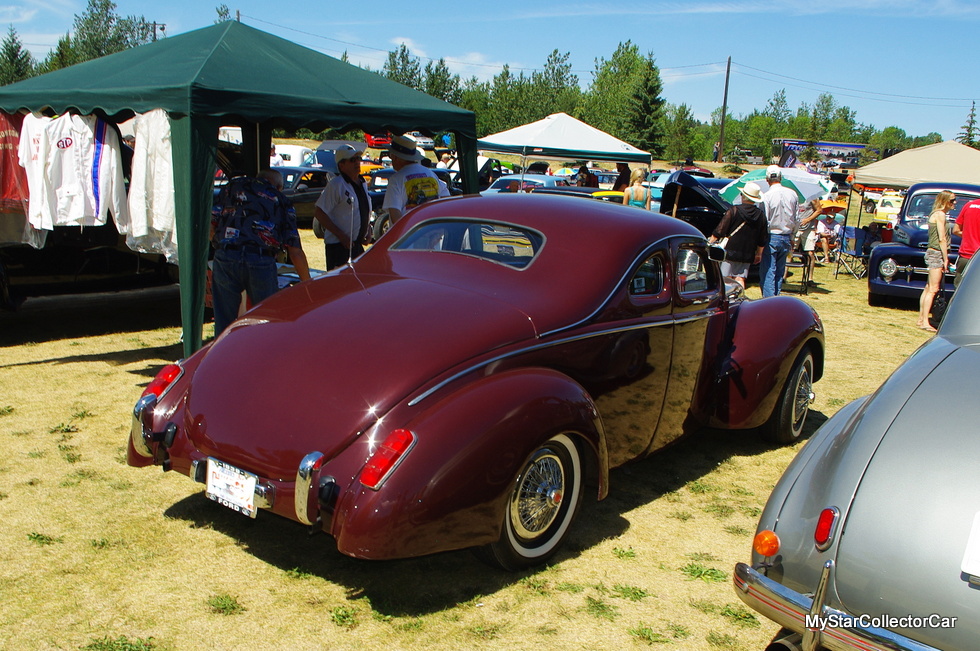 Duke’s pride and joy is a very cool little ’39 Ford. These cars have been the default position for customs ever since they hit the radar of hot rod guys and in Duke’s case, this one hit his radar back in 1951.

This car defines old school in a way that you won’t find in a manufactured 2015 “old school” look at most car shows. There’s a mix and match of styles from many decades in Duke’s ’39 Ford but the story really began in 1951 when Duke and his car buddies took on a winter build. Duke gave full credit to Hugh Murray, the guy who did all the lead work on the old Ford and if you want to see quality custom body work then check out a car that’s been around for 63 years. 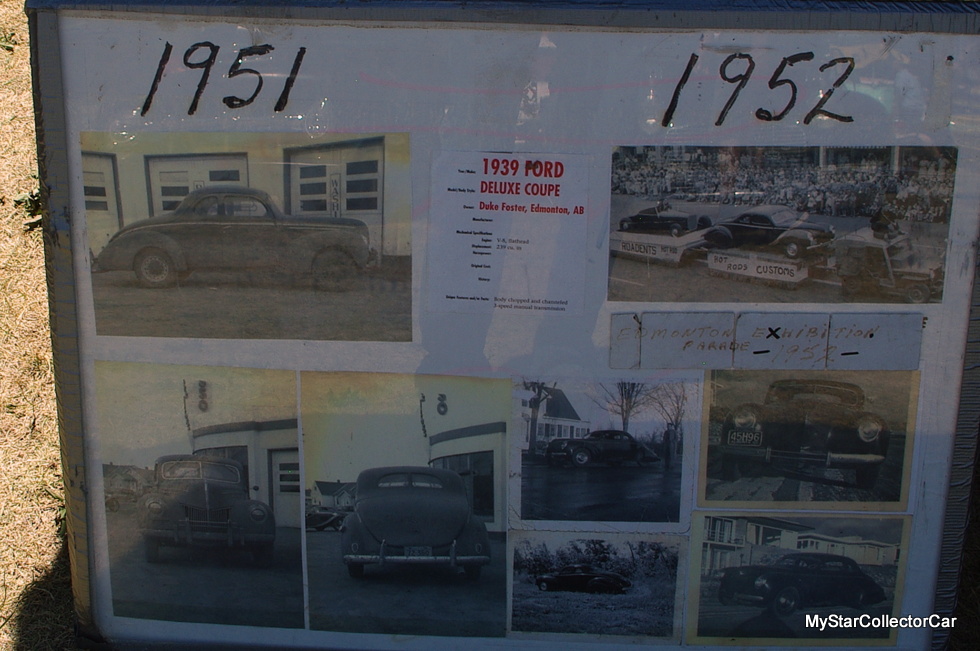 They worked with lead, not plastic back in ’51 and if you weren’t an artist you didn’t have a future in the body work world—particularly in the lead sled body work world. Duke estimated they probably put 800 hours into the project back in ’51 and ’52. He said: “We called it the Black Banana because it had a nice shape and you could slip around town in it”. 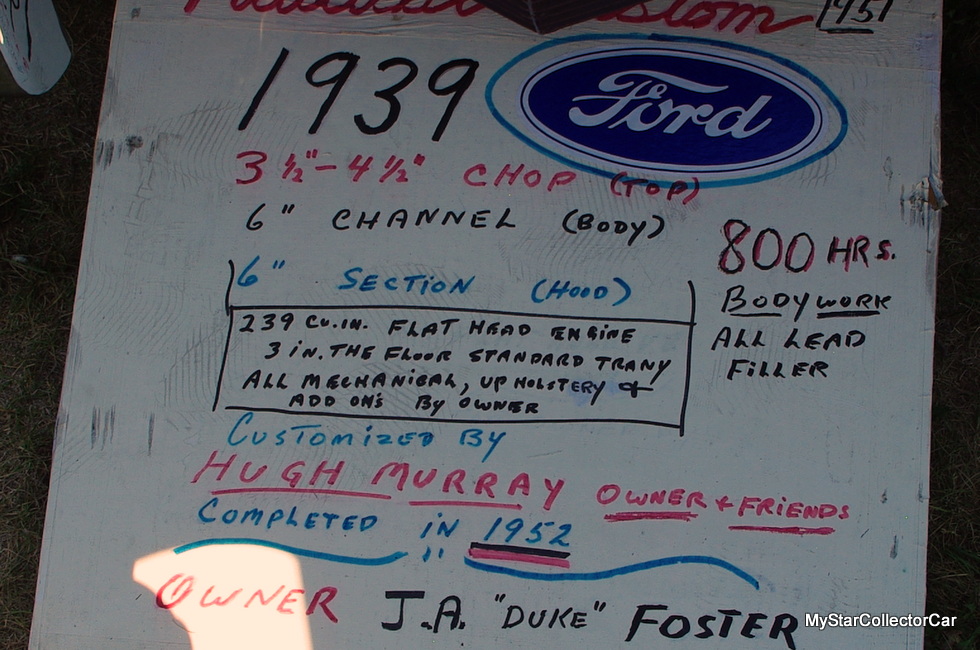 Since then Duke did a few upgrades to his ’39 Ford and he did the last major work in the 1970s. He added some 70-ish aftermarket wheel covers back then and added some tail lights from a Fiat wagon. There’s a ’72 Colt dash in the car now because, as Duke explained, “The old one wasn’t to my liking”. The car was upgraded to a 12-volt system and Duke added some other touches like custom window cranks and a foot pedal that opens the doors. 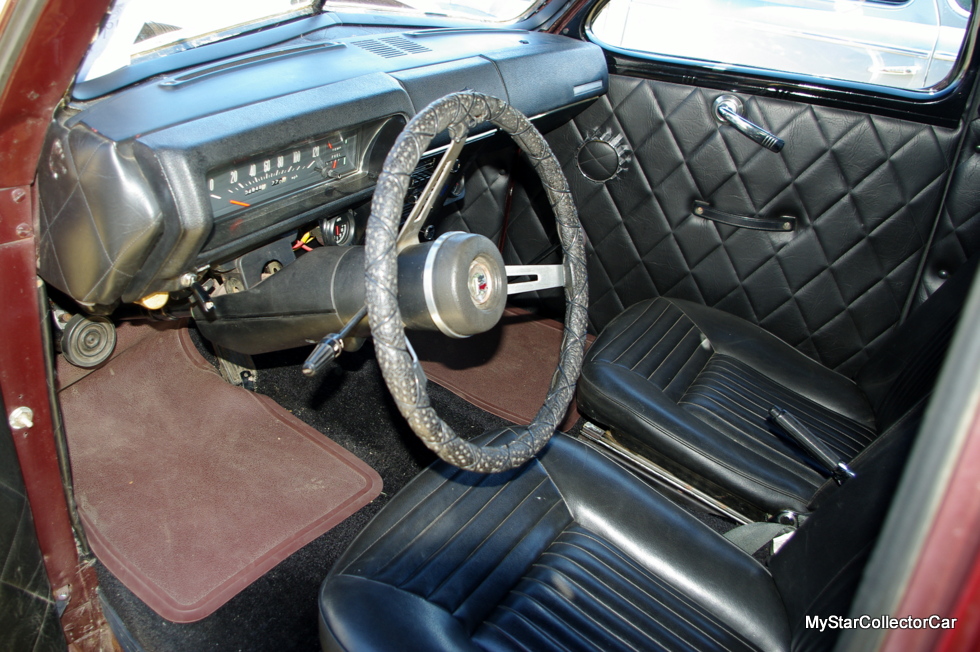 He also engineered the water pump so it flows slower and there are other tweaks to the cylinder heads that make this flathead run cooler than every other stock flathead on the planet. Duke left the noise of the track cars and hot rods behind him years ago so this ’39 Ford is incredibly quiet in its latest form plus it’s so smooth you have to look at the fan to see if it’s running. This car runs like the proverbial Swiss watch. 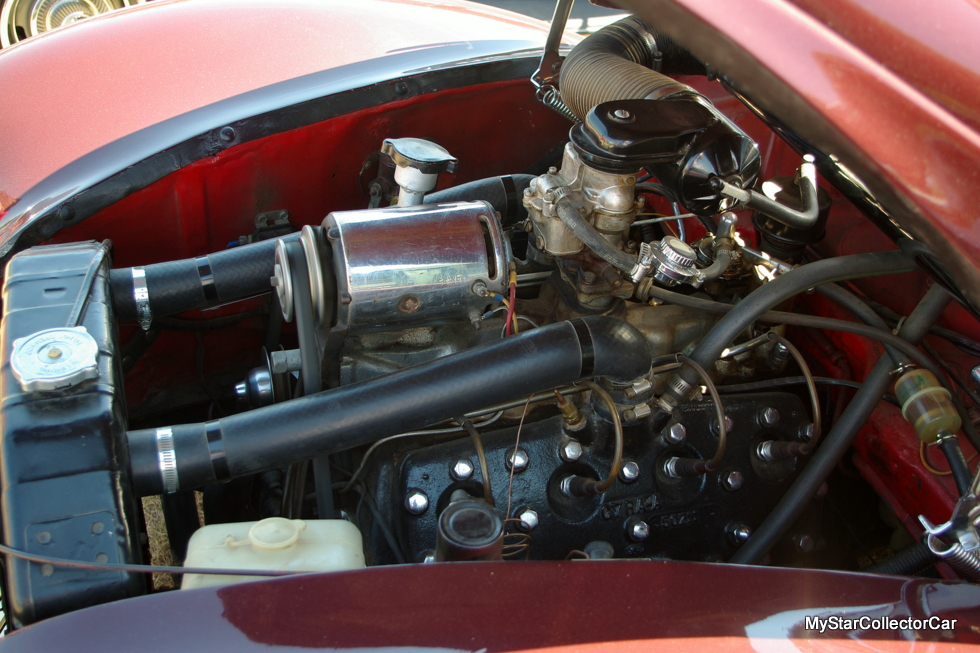 This ’39 Ford was much more than a weekend warrior custom ride because back then you built a car to drive, not show. Duke explained: “This car was my daily driver for many years so it saw a lot of winter roads and I towed my ’39 Ford 4-door stock car with it.The chassis has over 400,000 miles on it now it’s had three engines in it and a lot of rebuilds on the brakes and front end”.

Every car comes under scrutiny when life throws a few curves like marriage and family and that is the main reason most car guys part with a beloved ride. Duke’s case was unique because he went through a period where the old Ford made no sense in his family’s fiscal plan and in 99 out of 100 cases the owner’s wife is fully behind a liquidation sale. Duke explained how his late wife Margaret talked him out of selling the car because she told him, “The car is so much a part of you so you can’t sell it”. Margaret gave him  great advice because Duke’s grandchildren literally grew up in the back seat of this car. 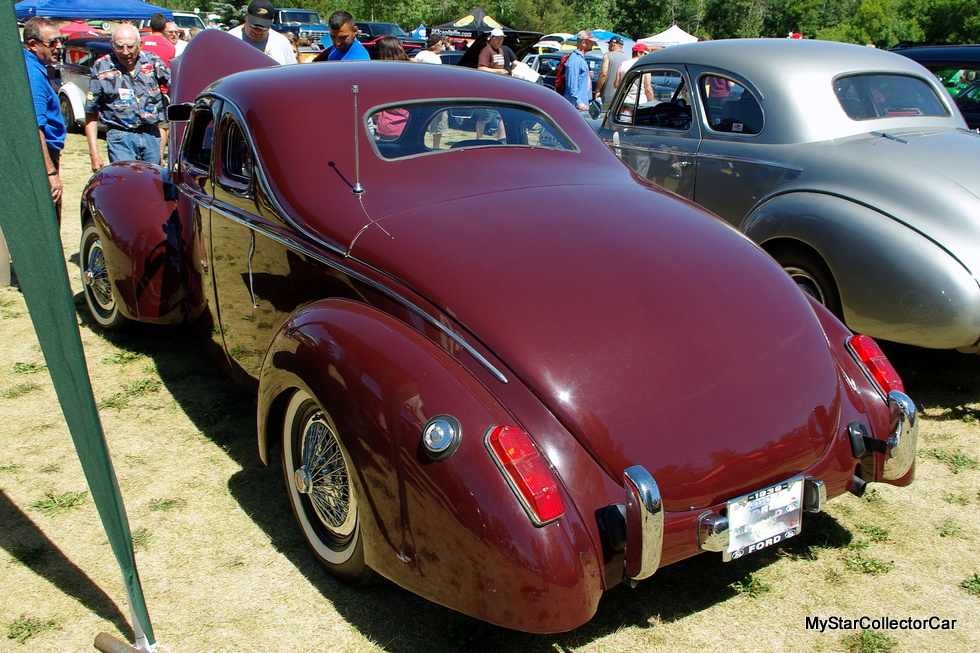 Margaret was not only right about the car—she was a visionary because Duke’s car is a huge part of his personal biography and it’s one that takes him back to that winter of ’51-2 when his future and this ’39 Ford were full of possibilities. 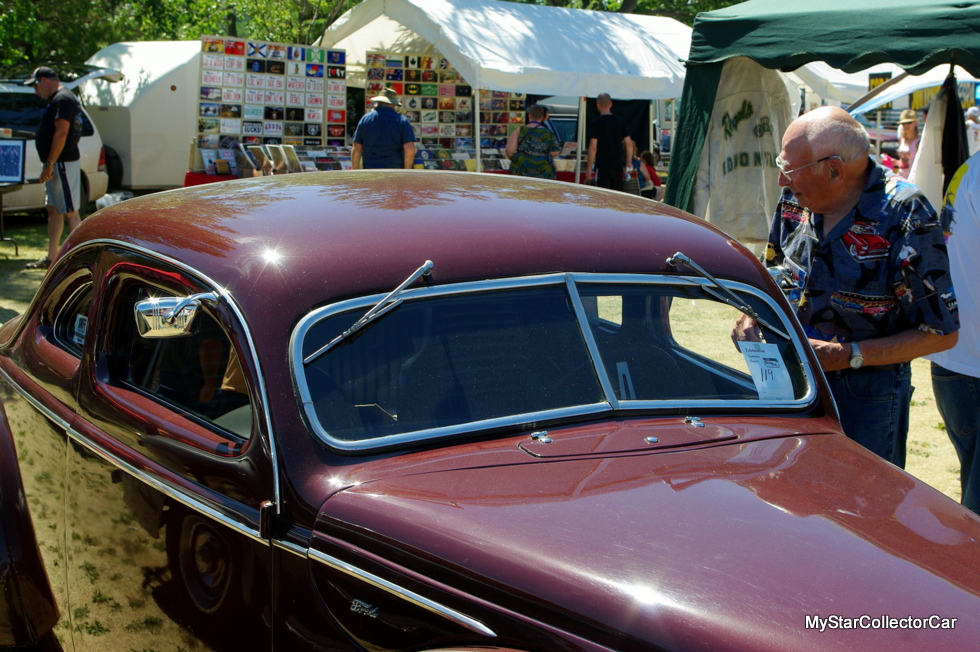 A legend driven by a living legend.

A TALE OF TWO SPRINGS: ON TIME FOR THE SPRING HILL...

TOO MUCH OF A GOOD THING