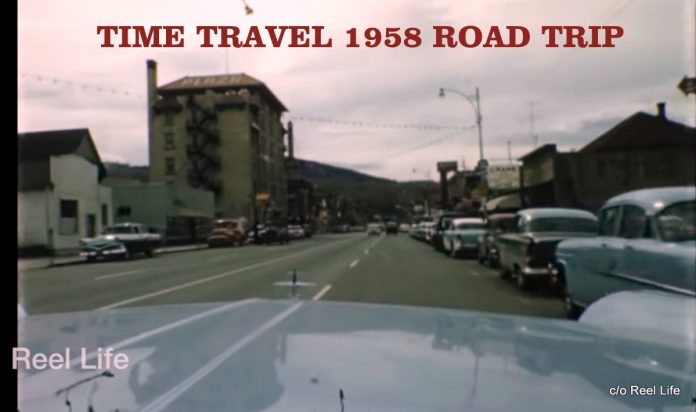 Those of us from a bygone generation can easily recall home movies that mostly featured young and expressionless baby boomer zombies at family events (like Christmas).

However, there are exceptions to every rule and MyStarCollectorCar discovered a 1958 home movie (on Youtube via Reel Life) that broke every rule in the book because it did not star somebody’s relatives at a family gathering. Instead, the film appeared to be the product of a dash-mounted film camera in what appeared to be a new Lincoln (Continental III), given the hood design and emblem.

The car’s camera captured a road trip through Canada’s Okanagan, British Columbia region via Vernon enroute to Kamloops, British Columbia, with a trip to Chilliwack, BC before dipping into the state of Washington, and then back up to Calgary, Alberta Canada where the film meandered to its conclusion in southeastern British Columbia.

MyStarCollectorCar was fascinated by the 20-minute film because it was a time tunnel journey to the past in a vintage Lincoln, a past that featured real life on the road during the late 1950s. British Columbia’s Okanagan region was sparsely populated compared to 2022, so the road traffic on its narrow two-lane highways was thin.

The big Lincoln traveled through the Okanagan with little traffic in either direction before it entered Vernon, a then-small town where the highway ran right down its Main Street and showcased many cars (and some trucks) parked on it.

The “British” in British Columbia likely influenced some of the car choices because the film’s BC roads had a notable number of British cars on them, ranging from Austins, to Morris Minors, to a couple of Triumph sports cars driving in tandem on the highway between Kamloops and Chilliwack.

Another noteworthy foreign addition to the same road in the film was a vintage Mercedes convertible, now worth roughly the equivalent of a developing nation’s gross domestic product.

However, most of the vehicles were domestic cars, although Canada and the United States built separate vehicles during the 1950s, right up until the 1965 Auto Pact agreement eliminated the automotive trade barriers between the two countries.

For the most part, the 1950s Canadian cars resembled their American counterparts, but a closer examination would be needed to distinguish them, so a 1958 driving film was not helpful in this regard because one would need more than a couple of seconds to spot the differences.

Nevertheless, the age of the vehicles in the home movie was obvious on either side of the border and provided a unique insight into car owners from the two countries. For example, there were more post-1955 cars in Canada on average than in the US where the Americans’ car count leaned toward the pre-1955 era.

Trucks appeared to be mainly pre-1955, with the exception of a 1958 Chevy truck in the film. The trucks from that era served as simple workhorses and were not trendsetters in terms of newer styles.

The Lincoln driver upped his velocity game once he got back into the States, possibly because of higher speed limits and the odd four-lane highway in Washington state at the time. The home movie chronicled two stranded motorists in then-late model cars (one in British Columbia and one in Washington) along the side of the road. There were no four-way hazard lights on 1950s-era vehicles, so their owners simply put up their hoods to warn other drivers.

Speaking of emergency vehicles, the film’s trip only included one law enforcement car, a vehicle that did not appear to have external police car signage, but had a red light secured to its roof and was possibly a provincial highway patrol car.

There were too many cars and landmarks to cover in one MyStarCollectorCar-sized article but the retro gas stations with mechanic service bays really caught our eye-give or take about a million very cool retro rides in the home movie.