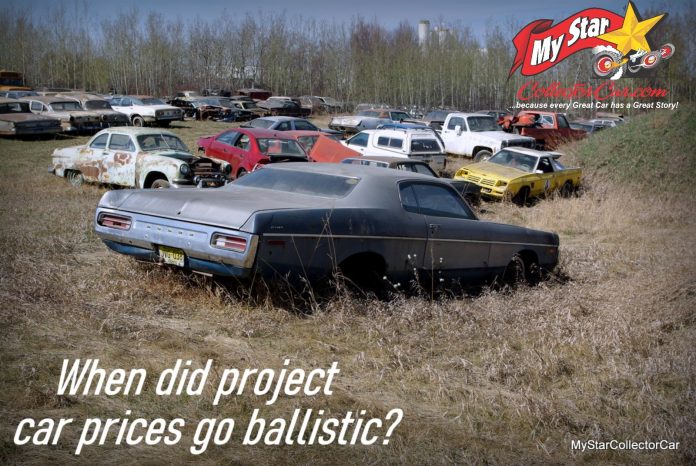 Today’s market for vintage cars and trucks is very strong in a specific sense.

This factor is very true in the collector vehicle hobby where new rock stars are found every year in the market and demand skyrocketing prices that drive up their value to dizzying new heights. The flavor-of-the-week stars rarely hold their value by comparison to the traditional stars, much like Oasis was never able to maintain altitude during their early Nineties heyday when band member Noel Gallagher declared Oasis was “bigger than the Beatles”. It was a cocky statement Gallagher later regretted and attributed to excessive drug use at the time, but his misplaced arrogance provides a fair comparison to overvalued vintage vehicles that do not hold their value over the course of time.

Perhaps the most important point is the value of the vehicle because a pile of rust simply cannot be easily mined into a pile of gold when it comes to old vehicles. For example, there is little connection between a low mileage survivor pickup in pristine condition (that somehow beat the odds and led an incredibly pampered life) and Grandpa’s battered wreck of a truck in the north Forty on the farm. The one with the windows shot out, the one with bullet holes and rust-infested dents on every body panel.

The two trucks may have left the factory at the same time, but it will take a Hall of Fame body man to resurrect the battered farm relic and bring it into the same price orbit as the survivor truck. Be realistic, the high rollers who bought the survivor truck could buy and sell many Third World countries-but its terminally rusty counterpart has no value for them, a fact that severely limits its value for potential buyers.

Our second point relates to the first point: Do potential buyers of the rust pile have enough resources, skills, and guts to dive into a huge project? The answer will likely be ‘No’ to at least one of these highly critical factors, so a seller needs to remove his or her rose-colored glasses about the vehicle’s true value.

Which brings MyStarCollectorCar to our third point:  Just say ‘No’ to drugs before attempting to sell it because reality is a great frame of mind when one attaches a value to a pile of abandoned rust.

Our fourth point:  Do not attach a sentimental value to a pile of rust and use emotion as a guideline for its value. Potential buyers do not care that somebody in the seller’s family once owned the rust wagon, they only see a huge and expensive project that will severely test their mettle and their marriage.

MyStarCollectorCar’s fifth and final point: Do not listen to the misguided herd of self-proclaimed experts who know everything about market values for piles of rust and have invested precisely zero time or money in the restoration process. These clowns are not exactly lining up to buy the piles of rust, but they have plenty of opinions about their values in today’s collector vehicle market. After all, they did watch 20 minutes of a televised auction during its peak time when the low mileage survivor vehicles hit center stage, so they know what they are talking about…in their own fantasy world.