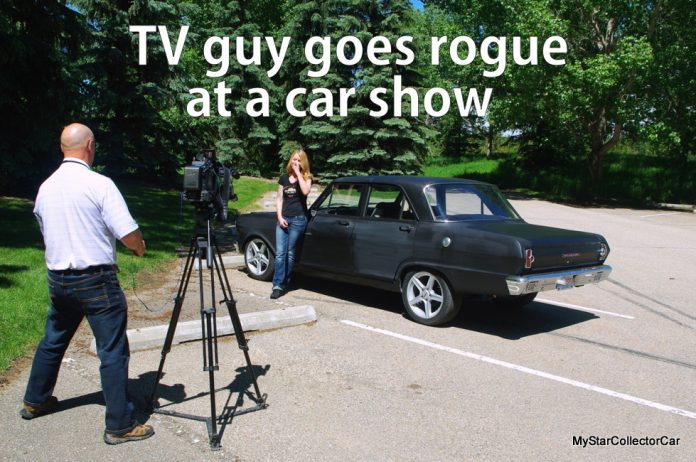 One of the worst offenses that you can commit at a car show is any form of physical contact with the vehicles entered in the event.

Fortunately, most people are smarter than a house plant so they will keep their distance and not touch the vehicle unless otherwise instructed by the owner.

These wise decisions are based upon a simple principle: Common sense. This basic trait ensures that somebody else’s property will not be damaged by a thoughtless clown.

One of the most egregious examples of bone-headedness occurred in the bright glare of TV cameras when a flakey reporter visited a car show in Sacramento, California. He was part of a morning news crew whose main purpose appears to be standard issue puff pieces punctuated with grim tales of real news (death and destruction) delivered in the finest tradition of light-hearted breakfast journalism.

In this case, the roving reporter found himself covering the car show and he was emphatically not the right guy for the job because he was missing a crucial ingredient for the piece: A car guy soul.

This moron also had no sense of humor, although he did his level best to imitate a qualified comedian during his brief misadventure in automotive mayhem-and failed miserably at the task. He chose the standard route of the comically-challenged and attempted to convey an “offbeat and zany” approach to his car show report.

He chose to climb on the trunk of a vintage first-gen Ford Thunderbird while reciting vacuous babble-speak about how he “wanted to live on the wild side”. There are only two ways this moron could have realistically accomplished that mission: He could have attempted to stay on the trunk while the T-Bird was maxed-out at top speed (easily over 100 mph) or he could have faced the wrath of the car’s owner if the owner had spotted this idiot on the trunk of the vintage Thunderbird.

Either way would provide a huge hazard to this buffoon’s good health. As mentioned, no car guy of sound mind would even consider climbing on the truck of an incredibly well-restored classic car. The amount of money and work that went into the paint finish on the T-Bird to bring it to a high level of restoration would likely take at least a few years of this TV flake’s salary to cover the cost.

Then he upped the ante on the carnage when he opened the door of another first-generation Thunderbird and contacted the body panel on the vintage T-bird next to it. It was a horrifying moment for legitimate car guys and his disdain for the vehicles was obvious when he made another misguided attempt to be funny and wondered about the year of the car (“It’s a 1950…99?”) while damaging the perfect paint finish on the cars.

He had no sense of remorse about the incident and tried to make light of the incident. It was jaw-dropping TV for real car guys and a slow-moving train wreck of a piece. The two anchors in the studio appeared to be unfazed by his shenanigans, presumably because they must be used to his antics and were also not car people.

Either way, the owners of the vintage vehicles (and a new 2020 Ford that he also damaged in the clip) were not amused and the reporter was immediately fired for his stupidity. It was a life lesson that was clearly not taught to him during his formative participation trophy years when everyone is special.

Instant karma ran over the roving reporter/moron and MyStarCollectorCar hopes it came in the form of a 1957 Ford Thunderbird.