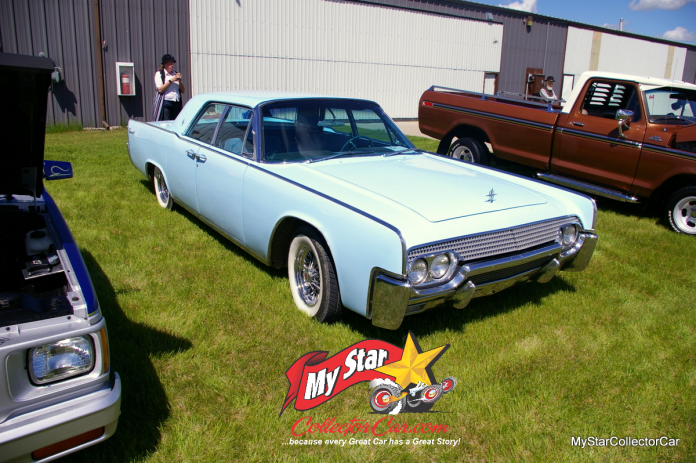 Trevor Bateman became aware of his 1961 Lincoln when he was a young guy in the early 1980s.

The 1961 Lincoln was a fully loaded beast of a car right from the factory. Its long list of creature comforts included power brakes, power windows, power seats, and power steering to maneuver the 60-year-old luxury barge down the street.

Nevertheless, the ’61 Lincoln was an odd source of instant affection for a young car guy during the early 1980s, but Trevor fell in love with the car. He even contributed his time to the restoration process during the early days when his boss owned the big Lincoln.

The initial restoration in 1981 included new rear quarter panels, although Trevor acknowledged the welder was inexperienced and eventually the Lincoln required another rear quarter replacement.

Trevor’s former boss kept the car after the restoration, but it was never far from Trevor’s heart in the grand scheme of things, even after the man passed way and the car was kept in storage for another 19 years until Trevor was finally able to become its owner in 2006–along with his wife Barb.

Trevor kept close tabs on the Lincoln’s whereabouts and achieved his dream to own the big Ford after many years on the sidelines.

It is not a state secret that years of uninterrupted storage are murder on a vintage car, so Trevor was careful when he reintroduced the 1961 Lincoln to fresh air and the road. His smart game plan included the fuel delivery system, from the gas tank to the carb, because stale unleaded gasoline is highly destructive to these components.

Also,it should be noted Barb is a hands-on car girl who got directly involved with their Lincoln’s resurrection when Trevor was finally able to acquire the car. The car was at a show when MyStarCollectorCar spotted it in the large lineup of vintage rides at that event. Just for the record, Barb drove the big Ford to the show.

Trevor drove another one of their vintage vehicles to the show, a ride that had more muscle at its disposal for drivers. Barb takes a more genteel approach to their ’61 Lincoln and prefers to enjoy the ride at the posted speed limits.

As mentioned earlier, the 60-year-old Lincoln was built for comfort, so Barb enjoys a more leisurely pace behind the wheel. Additionally, the Lincoln’s factory big block 430 cubic inch engine could handle higher speeds, but Barb keeps her foot out of the gas pedal and makes the journey easier on the vintage ride.

Lincoln purists will notice the non-factory hubcaps on the car, but the original ones are scarce, according to Trevor. A restoration to original equipment is always an ongoing process for car guys and girls because of parts scarcity after the passage of time.