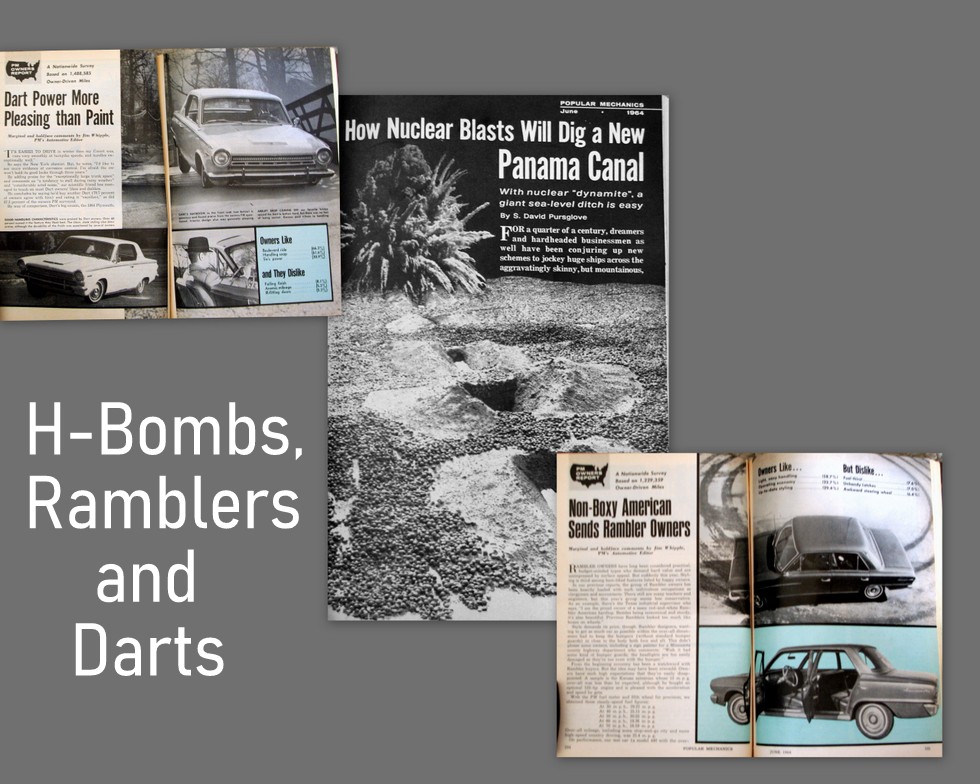 I grew up with Popular Mechanics so I was happy to purchase a June 1964 edition at a local swap meet and enjoy this automotive blast from the past.

It is always a great trip down memory lane to read an automotive magazine from a bygone era and this edition rekindled my elementary school memories mainly because of a non-car article in it: use of a hydrogen bomb to make another Panama Canal.

The article proposed nuking the land surfaces with hydrogen bombs to vaporize enough of the rock and make giant craters of loose rubble that could be easily moved out of the way for a new giant ditch in a fraction of the time needed to build the Panama Canal. 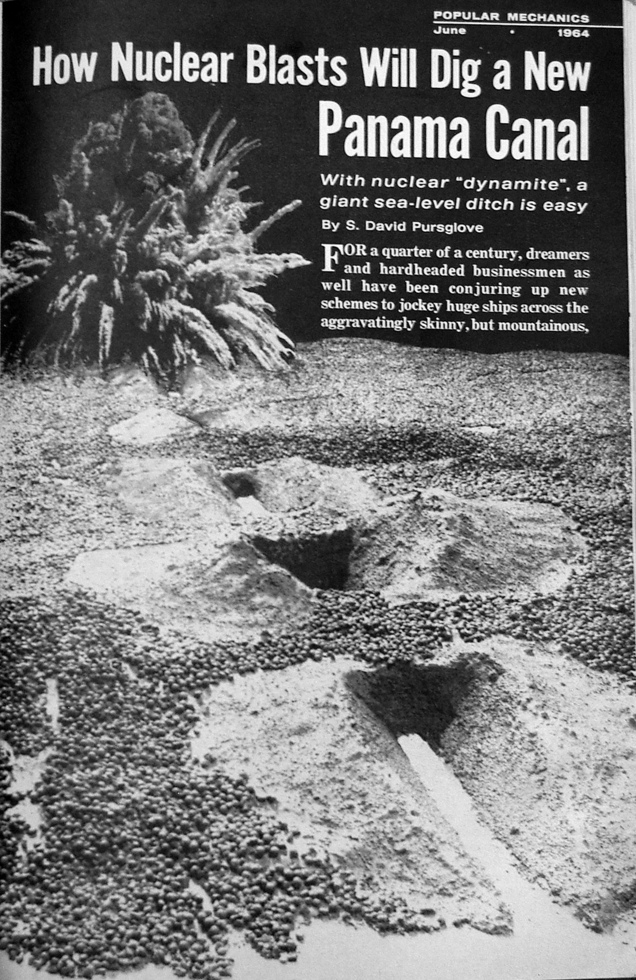 I remember this article because it was the first time I ever read about atomic explosions that did not include me and my classmates ducking under our desks because a flimsy metal/wood structure was excellent protection against thermo-nuclear devices. Just ask your teacher at the time. 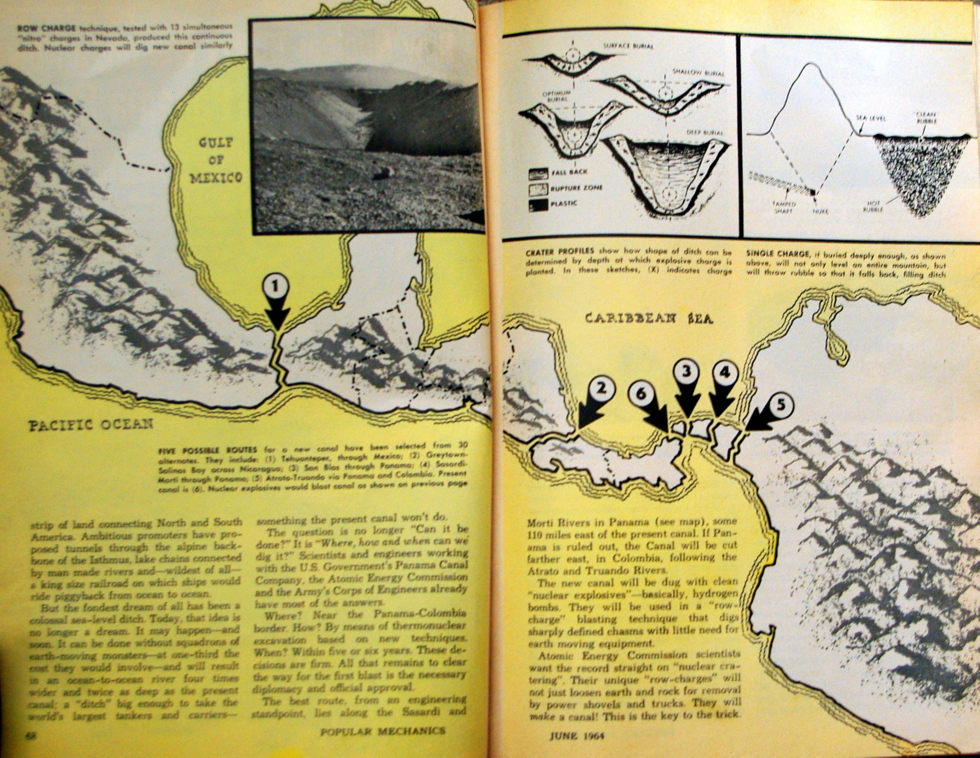 I also recall that I was a little skeptical about the use of hydrogen bombs to make a ditch between large bodies of water, but the writer of the H-bomb excavator was pretty optimistic about the project and made a bold prediction the new canal would be a certainty “within 5 or 6 years” from his published 1964 article. His deadline for the giant H-bomb ditch’s completion expired 48 years ago and we are still waiting for his very cocky forecast to become a reality. His missed deadline was (and still is) not a bad thing in my world. 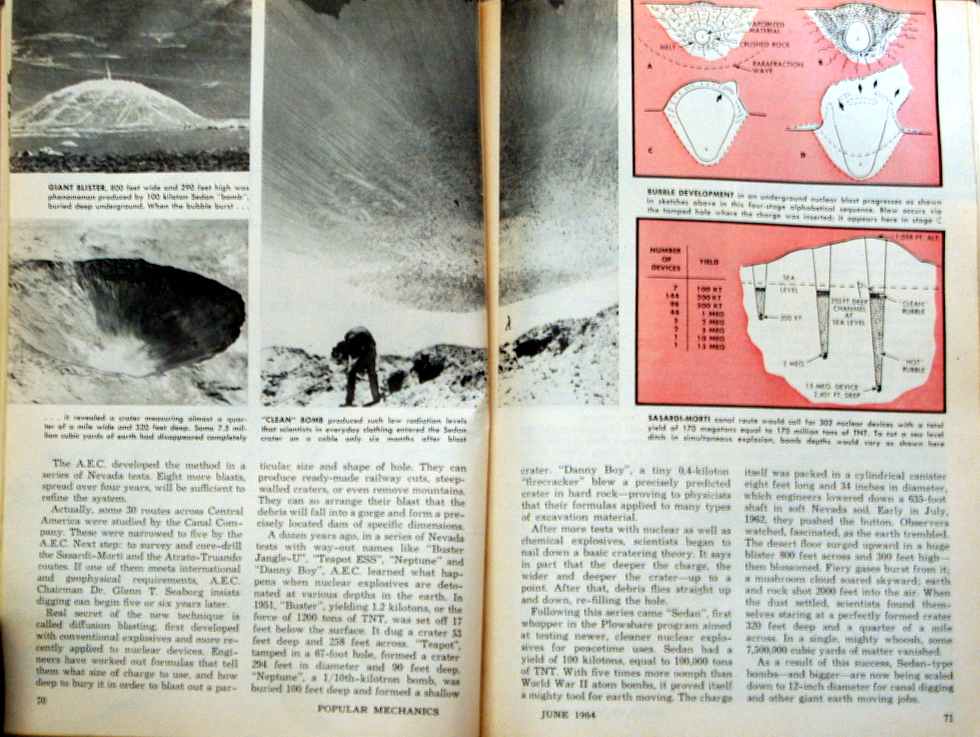 I turned my interest toward more realistic and compelling material in the June 1964 Popular Mechanics and checked out the car articles in it- specifically the 1964 Dodge Dart and Rambler American. Popular Mechanics took a different approach to their automotive magazine competitors and assembled a survey based upon owners’ experiences after purchase.

Both cars were evaluated after over a million total miles apiece of driving experience by a large number of owners. Popular Mechanics took a pro/con survey approach to their articles and assembled their data based upon owners’ viewpoints. 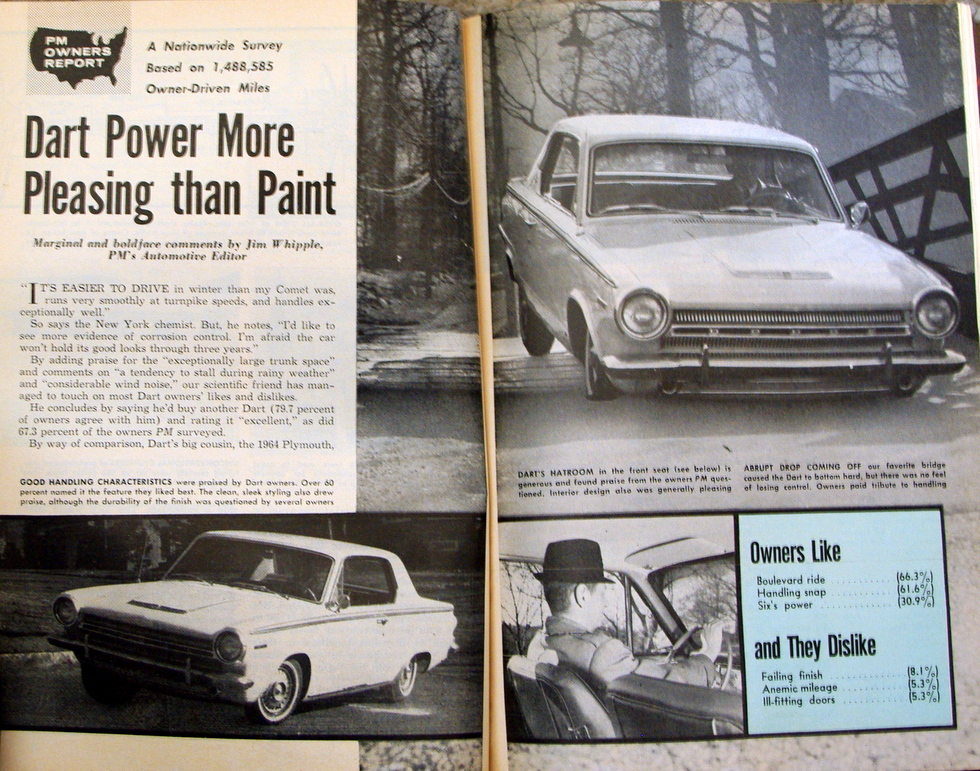 Both cars occupied the compact car category and were equipped with modest six-cylinder engines. The six-bangers appeared to be a curse and a blessing for the two compacts because the cars delivered then-solid economy around town, but were worked too hard to achieve great mileage at highway speeds. 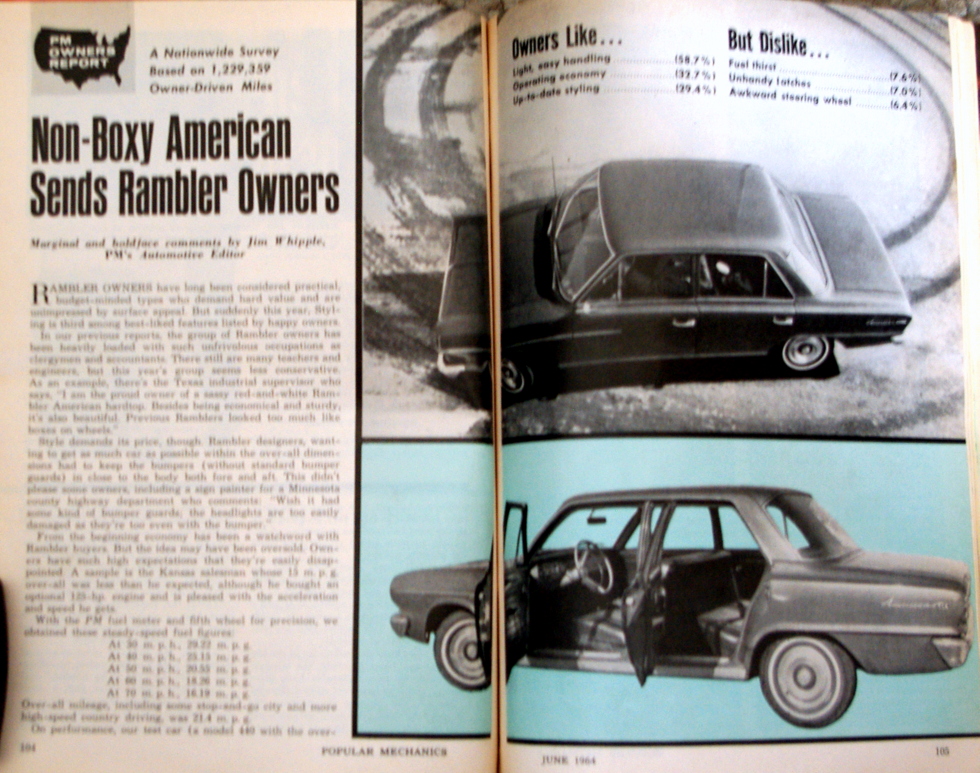 The lack of fuel economy was the biggest complaint for 1964 Rambler American owners and ran at the number two complaint position with ’64 Dart owners. Neither car was able to reach 20 mpg (Rambler delivered 16.19 mpg and Dart delivered 16.6 mpg) at 70 mph because their six-bangers were screaming at that speed. 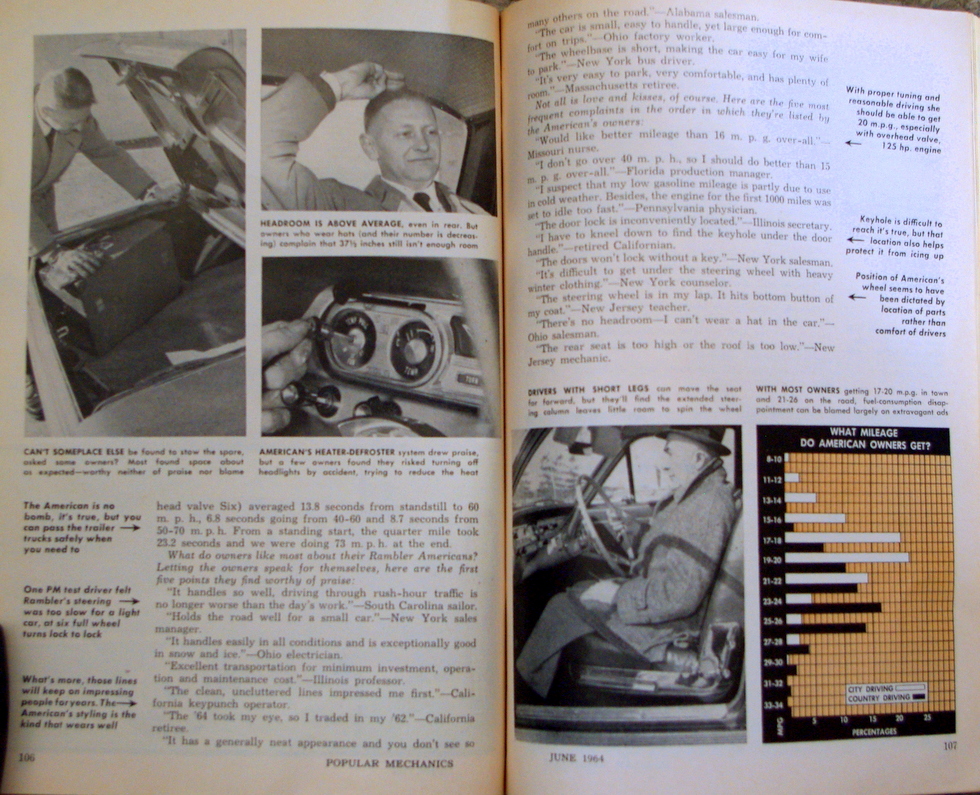 These cars were great urban cars because of their small (by 1964 domestic automotive standards) size and ability to duke it out with smaller import models like the VW Beetle. On the flip side, the two cars offered considerably more room and power, along with a much longer list of creature comforts like real heating systems and automatic transmissions, compared to the Bug. 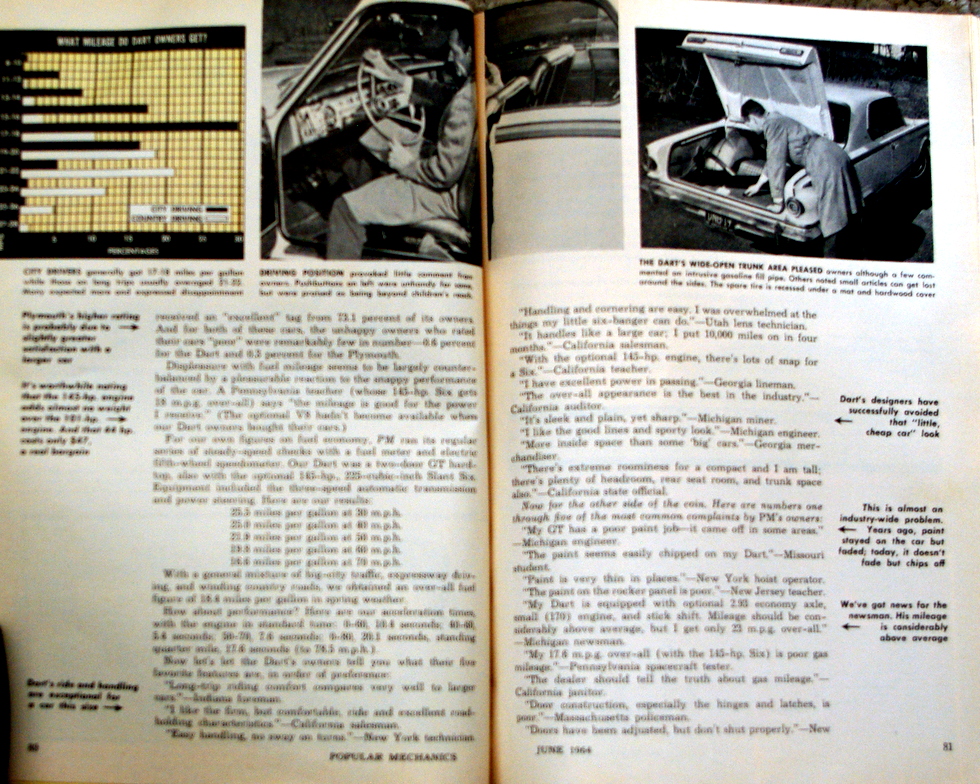 In the long run, it was clear the 1964 Dodge Dart and Rambler American models were runaway favorites with their customer base.

The Hydrogen bomb ditch project was definitely not as popular with Popular Mechanics readers and other sane people at the time.