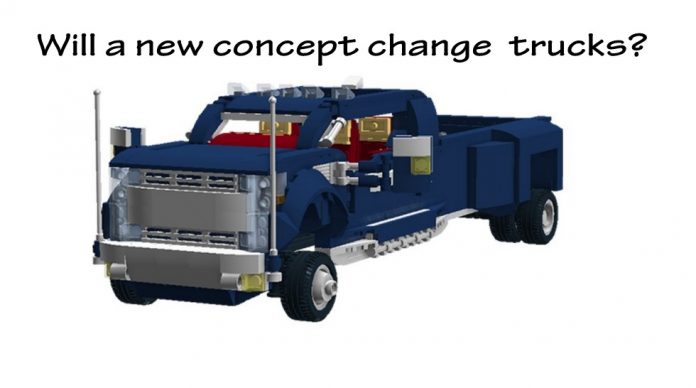 One of the mainstays of the car guy world is the pickup truck.

The truck has become an icon over the years because a pickup is deeply associated with honest hard work.

Pickup trucks have never been known for their Hollywood handsome good looks in a general sense, but many of them have demonstrated this quality over the years–even if the pursuit of beauty was accidental for them.

The debut of the Tesla truck has another Elon Musk stunt written all over it. Musk is one of the most famous car builders in the history of the automobile and is closely associated with a heavily subsidized movement to save the planet…one electric vehicle at a time.

Many people have bought into the electric car concept, along with car companies and a few governments who are more than willing to invest in vehicles that have a serious voltage addiction and limited range.

The electric truck is based upon the same principles and may be coming soon to a jobsite near you. Elon Musk loves the limelight so he designed a truck for the blue collar eco-warriors in his fold.

The practical side of an electric vehicle purchase has never been an issue for either Musk or his potential customer base. The plug-in vehicles have limited range on their best day (compared to fuel efficient conventional vehicles) and typically draw their power from large battery packs that are built with strip mining materials that fly directly in the face of the green movement if logic is a factor.

Logic aside in 2019, the electric car may indeed be the vehicle of the future if researchers develop a battery that extends the range of these new age modes of transportation without requiring a strip mine operation to produce the relevant materials. They also need to defy the laws of physics and build a battery with an electrical current that is not handcuffed by extreme cold conditions found in most northern climates during the winter–a place and a time where man-made global warming has not yet been invited to the party.

The new Tesla truck has sparked many questions for obvious reasons. The first question is how many straight edges were used in the design by the Tesla people during the creation process?

The second question is whether the Tesla truck will be the star in an animated movie because of its cartoonish design.

The third question is relatively important to buyers who may choose to use the Tesla truck as a work vehicle: Will it work overtime? Can a Tesla truck handle more than an eight-hour day on a job?

The fourth question is the bow ribbon for the third question: Can a Tesla truck handle the heavy work found on most job sites? If not, it is just another not-so-pretty-face that is unable to handle the pace in the blue-collar world.

The fifth and final question: Is the Tesla truck yet another publicity stunt initiated by the electrified version of PT Barnum?

Pickup trucks are a fundamental part of the working world here in North America and they are a huge part of the car guy world because of their legacy, image and reliable source for automotive nostalgia.

Whether these cats will buy an incredibly ugly electric truck for practical work purposes right now (and then worship it in the future as a collectible vehicle) is wide open for debate.