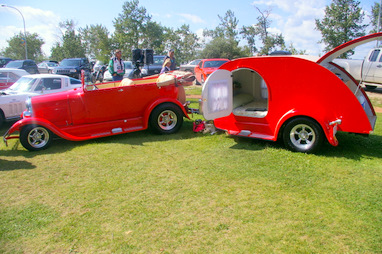 A 1928 Model A four-door sedan was a practical car from a bygone era of a pre-1929 Wall Street crash philosophy when Prohibition barely slowed down the fun and frivolity of the Roaring 20s.

“Elliot Ness may have liked the Model A and four doors but Bill Larratt was less thrilled with the two-door sedan concept eighty years later. He loved the Model A look- just with no top.”

He wanted an old school custom roadster so he could enjoy the fresh air and sunshine of summer cruising with the top down. 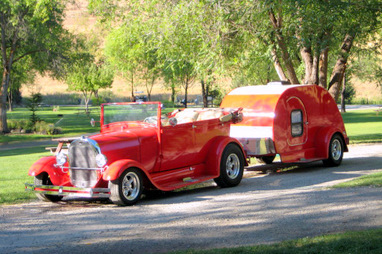 But Bill is also a practical man and he saw a need to own a rod that had a back seat for his grandchildren. Enter a practical solution from the past with his 1928 Model A that began life with a roof.

Bill is a very talented cabinet quality woodworker and he understands finish and perfection from a wooden point of view. Fortunately this talent translates very well into metal so Bill tackled the Model A with the expertise of a woodworking craftsman.

In keeping with the retro feel of this old Model A, Bill built a custom trailer from a 1949 Popular Mechanics plan.This trailer is not only a handicraft timepiece, it’s also very practical because Bill and his wife Deb have taken the car and trailer on trips as far away as California-thousands of miles in one trip.

The roof was chopped off and replaced by a 1928 Model A Phaeton retrofit as Bill transformed his Model A into a two-door roadster with enough room for his grandkids. He has always loved the Model A look and now he has added his own custom vision for the look.

The result is a stunning custom rod done to show-worthy standards by a man who usually plays with wood.

Bill coupled the Model A with a 350 Chevy and now he is ready, willing and able to go to any car show that strikes his fancy. Plus he is able to haul those little passengers along for the ride. 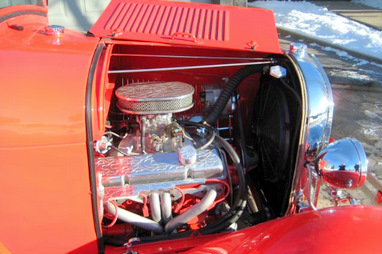