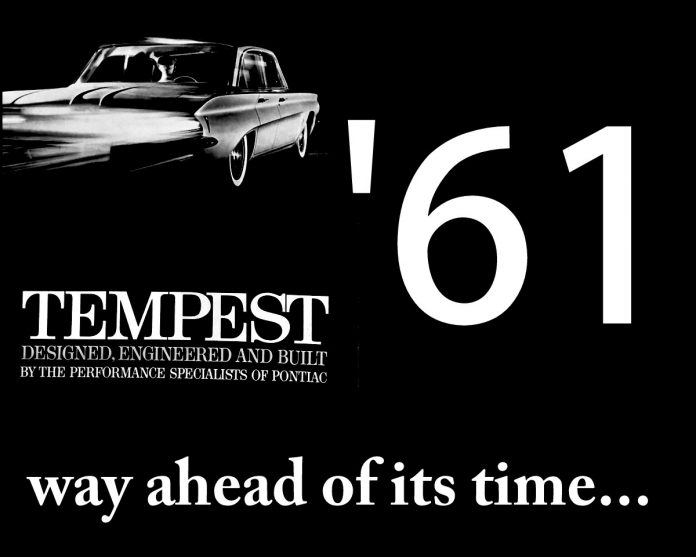 Pontiac was a famous GM brand most noted for its plus-sized models by the early 1960s.

Full-sized Pontiacs operated under separate directives, depending upon which side of the US/Canada border their buyers purchased a Poncho.

The impact of the Volkswagen Beetle had reached tidal wave size in North America by the late 1950s, so the Big Three jumped into the game by the early 1960s. The 1960 model year included compact models built by Chrysler, Ford, and General Motors to compete with the VW Beetles.

Ford and Chrysler built conventional water-cooled and front-mounted engine compacts, while GM countered with their Bug killer Corvair, an air-cooled, rear-mounted engine small car that was much bigger and more powerful than a Beetle.

GM made a good decision to introduce the Corvair and sold plenty of them to a customer base that wanted good MPG in their new vehicles. The General’s decision to build compacts encouraged their Pontiac division to create a desirable compact car in time for the 1961 model year. It was named the Tempest and the little compact had plenty of unique engineering under its skin.

John De Lorean was a brash young engineering wunderkind with GM at the time and applied his creativity to the General’s Pontiac division during the mid-1950s. De Lorean’s finest moment was likely his role in the famous Pontiac GTO, while his less-than-finest moment was his De Lorean sports car.

However, De Lorean was also the man behind the creative engineering within the compact 1961 Pontiac Tempest. De Lorean and his team developed the four-wheel independent suspension system for the first-gen Tempest because he wanted to compete with the Euro cars in terms of handling the curves.

A four-wheel independent suspension system required major changes to other components in the Tempest. Domestic cars from the Elvis era had a solid rear axle that performed about as well as an early pioneer’s wagon axle under tough conditions, but De Lorean introduced a transaxle concept to allow each side of the car to operate independently of the other side.

Additionally, De Lorean developed a small diameter torque tube with a flexible rod in it to handle the stress because the torque tube required less space than a conventional driveshaft. It was nicknamed “Rope Drive” by its detractors, but it helped Pontiac’s goal to produce a compact car in ’61.

Then De Lorean sawed the famous Pontiac 389 cubic inch engine in half and offered a lively slant four-cylinder version of Poncho’s big V-8, along with a small 215 aluminum V-8 engine choice it shared with stablemates Buick/ Oldsmobile and their small car entries in the domestic car market.

The result? The 1961 Pontiac Tempest was a lively little compact with any of its engine choices and made a big splash with the buying public that year.

The Tempest got bigger a few years later and eventually begat the GTO because the Goat shared the same base Tempest platform when it debuted with an unsliced 389 under its hood.