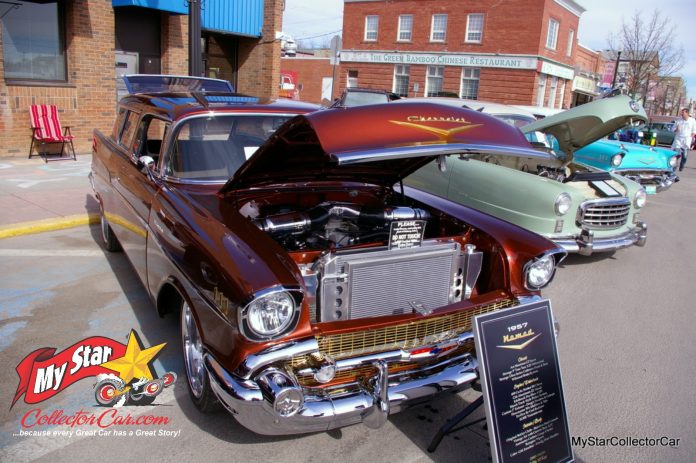 Colin McKay is a lifelong fan of the legendary Tri-Five Chevy Nomads, particularly the 1957 model since Colin was also manufactured in 1957.

The car’s first owner was a US serviceman who was able to transport the Nomad to Europe during his military career in the late 1950s. Fittingly named, the Nomad wandered all over Europe and was even driven on Germany’s famous Autobahn during its time in Europe, but eventually it returned to North America and somehow found its way to Colin’s community.

The Nomad was not on the road, so Colin was unaware of its existence, even though he attended school with one of the owner’s four sons at the time. One of the sons even lost the tip on his finger when it was caught in the Nomad’s door, a grim reminder the wagon only had two doors for exit purposes.

Eventually, Colin became aware of the Nomad and its new owner, although the son with the damaged digit reminded him the car owed him the tip of a finger.

The purchase marked the first step of a three-year build process for Colin, a talented car guy who is also a welder by trade. Colin mentioned his Nomad had become a storage facility for many parts that included its exterior trim pieces and dashboard.

Colin separated the Nomad’s body from its frame and built a rotisserie to work on the body. The factory frame was replaced by a custom-built aftermarket frame that could handle the beefed-up performance package Colin planned to add to the project.

Colin replaced the Nomad’s floor and built a custom firewall that gave it a cleaner look under the hood.

The car’s performance angle was greatly improved when Colin installed a 489 cubic inch big block Chevy engine coupled to a beefy 4L80E four-speed automatic transmission. Colin plans to dial in the fuel injection system on the engine in the future but estimates it will dyno test at about 600 horsepower.

The resto mod 1957 Nomad also has a beefy 4-wheel disc brake system, along with coil-over springs to handle the tremendous upgrade in horses under the car’s hood.

Colin added gauges to monitor the Nomad’s new engine while it is under load on the road. He stayed true to the old school interior of the car when he used reproduction upholstery that mimicked the old factory style on the Nomad’s seats.

Colin decided to give his formerly tri-color paint a new Cadillac color to enhance its overall appearance and lines because he wanted to keep the car’s exterior bling.

The overall result was an amazing resto mod 1957 Chevy that delivers the best of both worlds (new and old) to Colin whenever he gets behind the wheel. Incidentally, Colin’s car is a runaway winner in the show department, but he intends to drive his ’57 Nomad–a lot–because he does not build trailer queens.

Sounds like a solid car guy philosophy to us here at MyStarCollectorCar.