Valentine’s Day is the worst relationship minefield on the calendar for guys.

Do nothing to celebrate Feb. 14th and you end up with a major entry in your permanent file…and not a good entry like the time you brought home a cute puppy…

This is a very sticky time of year for car guys because a 400-dollar night out to celebrate Valentine’s Day could buy some pretty nice reproduction door handles or a whole new headliner for your ’66 Mustang.

Plus you lose all that valuable shop time while you’re out on a date.

But Valentine’s Day is non-optional for you…and we have a bigger problem.

We’re an old car site-we’re your wife’s natural enemy. We rank right up there on your wife’s hit list with the bartender at your favorite bar. So we had to figure out how to blend old cars and romance to ramp up the female demographic.

The answer was obvious-“vintage wedding cars”.

This wedding car story was one of the first articles that we did back in May 2009. Like the marriage itself, this story stood the test of time.

“There were two unusual wedding guests when Mark and Charlene Watson were married in July 1995.The guests in question were a 1947 Hudson and a 1947 Chevrolet; two stylish four door sedans with a family history from Charlene’s side-yes, the old cars came from the bride’s side

The cars were previously owned by Charlene’s late father–he had devoted considerable time and attention to the dynamic duo.

Charlene did not want to see the cars leave the family tree so she and Mark became the new owners of the vehicles. Then they decided that the cars would make great wedding cars for their upcoming marriage.

Charlene’s father had retrofitted the Hudson with a Ford straight 6 and automatic transmission linked to the original ‘three on the tree’ manual shifter. This was like fitting the Queen Mary II with power steering but it really works to this day.

Mark and Charlene’s wedding day was immortalized on the front page of the local daily newspaper when the Hudson had a minor temper tantrum in traffic.

The two cars caught the eye of a local newspaper photographer who snapped a shot of the newlyweds’ temporarily stalled classic wedding rides.”

Jim skipped the critical part of the narrative- the stubborn ’47 Chevy came back to life and got the wedding party to all the appointed rounds.Vapor lock can happen anywhere, any time…just ask Charlene.

But this car story has a happy ending-the cars are still with the Watsons plus Mark and Charlene are still happily married. 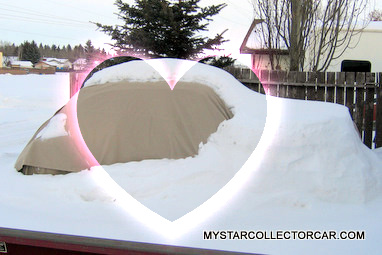 We like to think that the old Hudson and Chevy are the glue in the relationship. 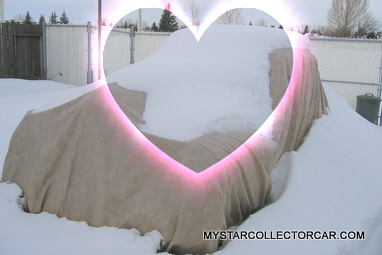 ELAINE:”From what I heard, the bridesmaids helped direct traffic on Gaetz Avenue when the car stalled. If I remember correctly, a couple of the bridesmaids got phone numbers from gentleman also caught in the Gaetz traffic snarl. A fun time was had by all that day”.

MARIAN:”I object to you’re “luring” women to this site! ;o} I am a gal and have been reading it for several months. I took auto shop all three years of high school – my first car was a ’66 Mustang. I then got my associates degree in mechanics.I have turned several of my gal friends to your site. We all have a strong interest in the old cool iron, owning several cool cars at the moment – (new plastic cars are trash.)I occasionally even send your emails to my husband’s email.Keep up the good work and don’t worry about “luring women” to your site. We’re already here!