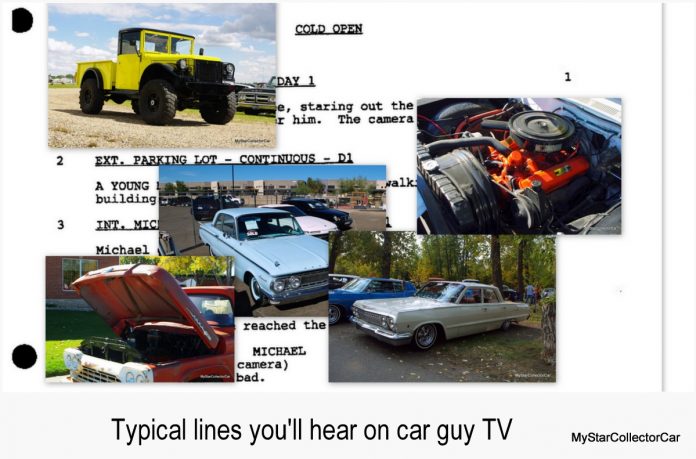 Car shows are a big deal in the mega-entertainment 21st century online world where you can watch things like Peruvian cat videos 24 hours a day.

What does that response even mean?  I’ve asked the same question about opening the hood hundreds of times during interviews and all I get is “Sure”; “No problem” ; “No – it’s pretty grimy under there – I don’t want to show it looking like that ” or “No way – I’m hiding a kilogram of coke under the air cleaner”. I’ve never heard “Absolutely” – maybe it’s only written into the standard TV cliché response handbook.

Another car guy TV line is Granny Car. This is a catch-all phrase for a stripped-down, low-option, low mileage sedan. It’s usually a lead-in to, “We’re going to gut this boring car like a fish, stuff a big-block in it and make it sing”.

I get what they’re doing but I look at it this way. A Granny car is a bit of a hero in my world because somehow this boring car survived for decades after its older owner looked after it, rarely drove it and kept it in a garage its whole life.

Let me interpret this for you. Car guy TV tells the former owner, “Sure you babied this car, kept it mint to this point, and we’re eternally grateful but we’ll take it from here”. So that incredibly well-maintained six-cylinder or two-barrel V-8 under the hood is going to be the first casualty – we’re going to dump it like ballast on an oil tanker ”.

Say goodbye to the heart and soul Granny car but ratings are ratings whether you’re talking about views on YouTube or Neilsen ratings on mainstream TV.

You’ll hear “Lower it” or “Raise it” in many TV shows because car guys seem to abhor factory ride height like nature abhors a vacuum.

TV guys roll up on a car and the first line you’ll hear is “We’ll fix the ride height” – this means the car (or truck) is going up or down in the world like an elevator on four wheels.

Ride height is the first thing video car guys will talk about because it’s the most obvious observation. but one thing is certain. If you’re a Granny car with a six-banger under the hood and normal ride height, your factory-stock days are numbered because change=cool factor world of video car shows.

The last cliché line you’ll hear on car guy TV is “Keep it under budget”. Budget is a moving target in the real world of car projects, but TV car guys use it like a hammer. They’ll bludgeon the viewer with budget talk until it loses all meaning.

Many online car shows mean it when they talk about budgets because they’re more like real car guys, but the bigger shows use it as a plotline.

We’re not that stupid – big TV shows have big budgets and lots of product placement advertising, so “Under budget” is more of a painful cliché and less of a reality.