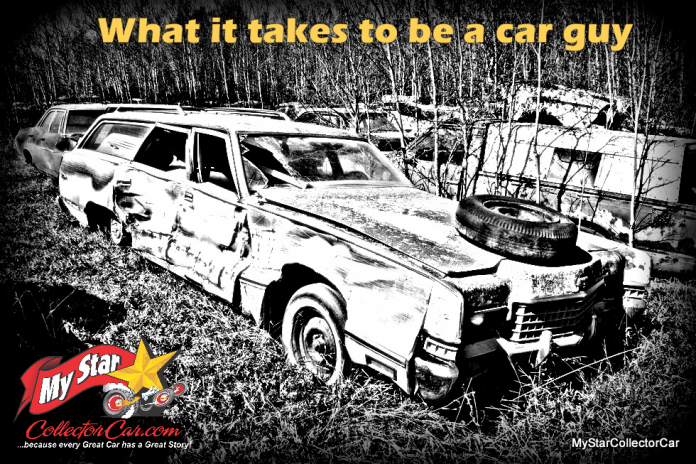 The world is made up of two groups: car guys and the other people who shall continue to remain nameless here at MyStarCollectorCar.

There are more than five good reasons to admire car guys but MyStarCollectorCar decided to limit our reasons to five because it fits our weekly ‘Five for Friday’ mandate. So, as cartoon god Bugs Bunny and his friends stated so well in song; “On with the show this is it.”

The first commendable car guy characteristic is vision. Car guys have the gift of foresight and can stare directly into their crystal ball to see the finished project at the finish line. Their vision is not always clear to others around them because all mere mortals see is a rusty, dented pile of junk that is well past its best-before date.

Outsiders see a metal carcass that is about 20 years too late for the crusher and well beyond any reasonable point of resurrection. Car guys see a shiny vision of mechanical beauty that can be made even better than factory in that ‘Six Million Dollar Man’ way.

The second car guy virtue is patience because their vision will require plenty of patience to reach the finish line. Every car project is a minefield for the builders, filled with grim surprises that explode on a regular basis when the car guy trips them during the build process.

Nothing is easy in a major car project and the car guy will face many setbacks along the road to success. Their patience will carry them all the way because a project will always take longer to complete if the car guy wants to do things correctly during the build.

The third car guy character asset is creativity. Most projects will require a viable game plan to complete a project because car guys will encounter many obstacles during the build. The issues occur in every type of project-from stock restoration to wild customs, resto mods or pro touring rides.

A stock restoration project may require a highly imaginative approach to replacement (or repair) of stock parts for a long-extinct car with no access to a big parts catalog.

A custom or resto mod project may require insertion of a square peg (e.g. a big block V-8 into a pre-war car) into a round hole so a creative approach is mandatory for success.

The fourth reason car guys run at the front of the pack is their fearless nature. A major car project is not for the faint of heart because of the perils and pitfalls encountered during every build. There will be plenty of frustration, skinned knuckles and badly bruised body parts (both human and metal) that will faze most mere mortals in a big way.

But not the car guys of this world. They will not be deterred by giant setbacks and dwindling bank accounts during the project’s extended timeline. Car guys overcome the long odds and painful ordeal of a typical car project.

The fifth and final reason for car guys to take a deep bow is their talent. A car guy has built a large portfolio of natural ability and education from their hands-on experiences in the car hobby.

Car guys possess the right degree of ability and enthusiasm to build their talent level to a lofty standard that matches or exceeds the rigors of any project.

We at MyStarCollectorCar salute the car guys of this world because they deserve our complete admiration for their efforts.

They are superhumans with a wrench and we are proud to chronicle their efforts on our e-zine pages.