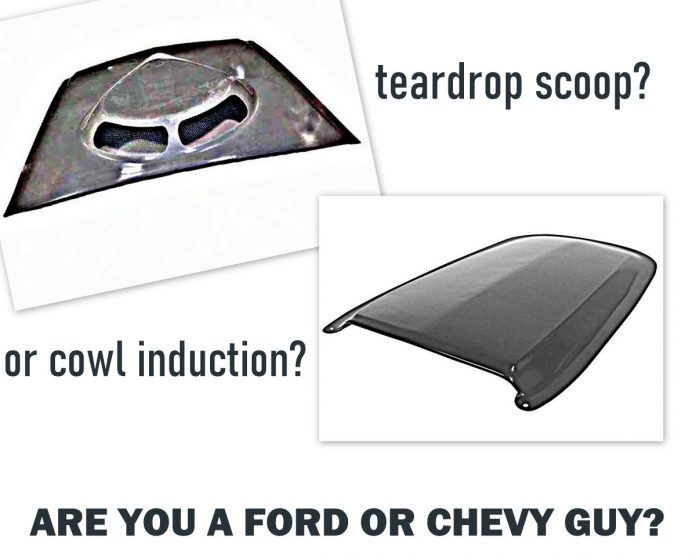 You’ll see a lot of vintage iron with bubble or teardrop hood scoops in 2021 because they’re not only functional–they’re cool and they add toughness to the look of a classic.

The bubble (or teardrop) scoop officially debuted in the 1964 with the legendary Ford Thunderbolt track cars. Some old school track guys will tell you the bubble scoop was around before that, but Ford got all the press. The engineering was pretty simple–the scoop was built to let hot air exit from the engine compartment. If you had an air induction system at the front and a bubble hood scoop you had physics and mechanical engineering on your side.

The ’64 Ford Fairlane is a natural fit for the teardrop bubble scoop because these cars were chosen to showcase the 427 Ford big block that year.

They were lighter than a Galaxie, so the power to weight ratio was a huge factor. An unintended consequence was how much more prominent these scoops were on a smaller car. Unintended or not, the humble little Fairlane went straight to Incredible Hulk mode with a teardrop hood scoop.

The 1964-1966 Ford Falcons were also great candidates for a teardrop hood scoop.

Part of the reason was their DNA connection to the Fairlanes–the teardrop scoop looks natural on a Falcon. It’s like an instant steroid boost for these little Fords.

The 60s Mustangs are another natural fit for a teardrop scoop because they too, are cousins to the Thunderbolt Fairlanes.

Are you sensing a pattern here? Genetics play a big part in how well these magnificent hood scoops work on Fords.

Ditto for the big Galaxies because you can add a teardrop scoop to them and not miss a beat.

They go into instant beast mode with a functional scoop taking up real estate on the hood.

I’ve purposely avoided citing other brands wearing teardrop hood scoops because Chevy guys see them as a “Ford thing”. Nevertheless, GM had its own bubble hood with the cowl induction system.

The Vettes started the ball rolling with the stinger hood scoop because the front was blocked off and the windshield actually provided the needed airflow thanks to lower air pressure at the base of the windshield.

Camaros debuted the functional cowl induction system in 1969 with the ZL-2 cold-induction scoop option. This was a breakthrough for engineered hood scoops, so the cowl induction showed up on the Chevelles in 1970.

Novas from the 60s and 70s look great with the cowl induction hoods because they add muscle to these little compacts–it’s like a shot of mega-steroids.

Cowl induction hoods can be seen on just about every Chevy built after (and sometimes before) 1960, because it’s a retrofit that definitely tells the world you’ve got more than a Blue-Flame six-cylinder under the hood–or a four-cylinder if your Nova goes back to its Chevy II roots.