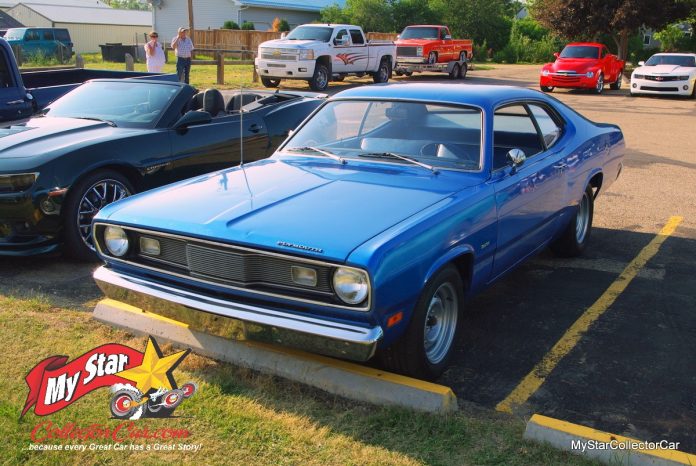 Full disclosure here: I used to own a 1971 Plymouth Duster with a Slant Six engine for many years, so I have always had a soft spot for these cars with a Leaning Tower of Power (Mopar’s famous six-banger) under the hood.

A recent summer car show featured a 1971 Plymouth Duster that reminded me of my own Duster because it also had a Slant Six engine under its hood but, unlike my car, this ‘71 Duster was in amazing shape.

The kicker was this Duster was a true survivor and was babied over the past half century by its former owner before current owner Shawn Crowell took guardianship of the car. It even has its original dealership sticker from a now -defunct Chrysler dealership on the rear deck of the Duster.

Shawn purchased the car from the estate of the previous owner when it only had 56,900 original miles on its odometer, a remarkable number considering the Duster’s age.

Incidentally, Shawn is no stranger to Mopar performance and has logged plenty of race time piloting big block 383 and 440 Chrysler power down the track, but he loves the 225 Slant Six engine’s performance for different reasons.

The primary reason is the fun factor because Shawn loves driving his ’71 Duster due to its originality and long history with the previous owner. An opportunity to own the car was a no-brainer for Shawn when he received an offer-to-sell phone call from a buddy one Sunday morning a few years ago- and was the Duster’s second owner by 2 pm that afternoon.

The most important part of the equation was a go-fast car guy Shawn respected the history behind this remarkably preserved 1971 Plymouth Duster and wanted to honor that legacy. In short, the original six-banger under the hood would remain under the hood, along with its three-on-the-floor manual transmission.

Shawn chose to only make minor alterations to the car, including a chrome exhaust extension so he could emphasize the Duster’s heritage as a modest single exhaust car when it left the factory. He also added rally wheels to his car because they were an option for 1971 Plymouth Dusters, and he likes the way the wheels look on the car.

Shawn also added a shield to protect the carb from exhaust manifold heat during warm weather. However, these changes are very minor ones and do not radically alter the car’s amazing legacy as a survivor car.

The originality of the car extends to its interior because the fabric looks like it was just put on the car seats but is now 50 years old. The secret behind the car was its indoor storage, particularly during winters when the Duster was spared from the harsh cold.

As mentioned in the title, Shawn is now known as “Slant Six Shawn” in his car guy circles, a nickname he loves because Shawn is now a huge fan of the remarkable little Mopar six-banger. He loves to drive his Duster to work during the summer months–plus he just loves driving the car.