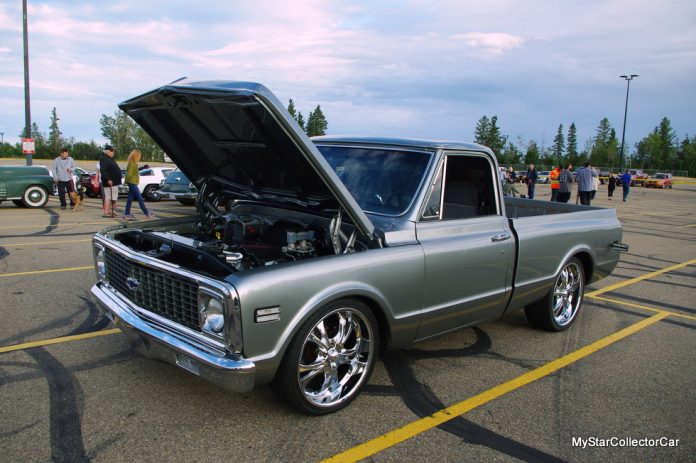 Daryl Cole is the current owner of a 1972 Chevy pickup that was the ultimate father and son project.

Initially Daryl and his son wanted to finish the project in time for his son’s high school graduation, but they missed that deadline by about two weeks.

The reason for the delay was the custom wheels and tires on the Chevy. In Daryl’s words; “They didn’t come cheap and weren’t plentiful” when they completed the resto mods on the ’72 Chevy in 2006.

Eventually Daryl’s son moved in a different direction and decided to build his own rat rod so Daryl became the owner of the ’72 Chevy.

The decision to keep the truck in the family was an easy one for Daryl because he owned a 1971 Chevy truck when he was a young car guy and always liked them.

His ’72 Chevy is a clever blend of 21st century technology and old school cool early 1970s Chevy truck style. Daryl purchased a 2001 Corvette engine with a price tag he called “free in now-a-days money”, along with a 4L60 overdrive automatic transmission. He also added a posi-traction 3:73 rear end to drop the RPMs on the highway.

The combination delivers an incredible balance of speed and performance, including “great mileage on the highway”, according to Daryl.

The wiring on the truck was custom-built in the United States and was fairly simple to install because its designer was willing to guide Daryl through the process.

MyStarCollectorCar readers will likely notice the lowered stance on the ’72 Chevy because Daryl dropped it 3 ½ inches on the front end and about 4 inches on the back end.

The truck retains its stock steering system and front disc/rear drum brake system because they still perform very well in 2020. Additionally, Daryl wanted to retain as much originality as possible in his ’72 Chevy pickup.

Daryl’s son wanted to install a center console and floor-mounted shifter in the truck, but Daryl threw a flag on the play and went with a column-mounted shifter so the truck could still handle three passengers.

Daryl recalled a June 2019 car show which was about an hour away from his home to prove his point because he was able to take two passengers with him-including his son.

He also recalled a very basic test run in the truck when he and his son sat on milk cartons and lit the Chevy up around his neighborhood until the test pilot phase caught the attention of his neighbors–including an off-duty police officer.

His response “Really guys?” was enough to keep the test drivers at bay until the truck was ready for the street.

Fortunately for Daryl, he only made a few regrettable decisions during the build process, although he chose to order aftermarket doors instead of repairing the outer skins on the original doors. The result is a door fit that produces excessive wind noise at higher speeds.

The seats in the truck were donated by a 1995 Chevy crew cab and are the back seats from that vehicle. The result is a very comfortable ride for the ’72 Chevy’s passengers.

MyStarCollectorCar believes Darryl achieved his goal to “build a potential factory truck” (in a What-if? sense) and his subtle resto mod is a big success for his ’72 Chevy pickup with the ‘Vette engine transplant.