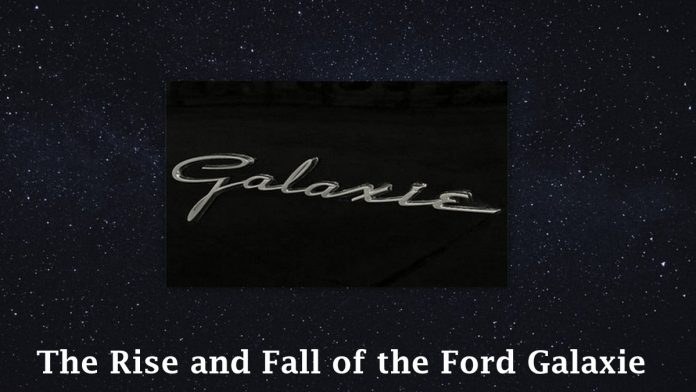 MyStarCollectorCar’s first order of business about the Ford Galaxie is its name.

The correct spelling should be “galaxy”, but Ford charted its own astronomical course when the Blue Oval boys chose to amputate the “y” on the end of the name and add “ie” into the mix.

The Galaxie name was Ford’s acknowledgement of the Space Race between the United States and the former USSR. The Soviets were able to launch a satellite into low orbit around Earth on October 4, 1957 and their success lit a fire under the Americans to launch their own rockets into space and keep up with the Communist Joneses, so to speak.

One of the less secretive elements of the Space Race was the design features on American automobiles because they were a stylish array of tail fins and rear lights that resembled rocket boosters in many cases.

Ford was a big fan of round taillights, so they put them on many of their 1950s models and this imitation rocket exhaust style reached a peak when they introduced the 1959 Ford Galaxie. The rear lights on the ’59 Ford were very large and reflected the Space Race notion that bigger extra-terrestrial journeys required bigger rockets, so the taillights on the 1959 Galaxies were giant round rocket booster-like features on the cars.

The Galaxie evolved into the 1960s with a completely new style that reflected the new decade. In fact, the 1960 Ford Galaxie was a complete departure from the ’59 Galaxie, although the Space Race style was still evident in its overall look, particularly on the back end of the car where the tail light configuration consisted of four separate half circle-shaped lenses divided by a strip of bumper chrome.

The ’60 Galaxie was also 6 inches wider and longer than its 1959 predecessor because a new decade meant a bold new direction in automotive styling for Ford’s model with an out-of-this-world name.

Ford gave their Galaxies another bold new style makeover in 1961 and even returned to large circular taillights on the back end. The Blue Oval boys also removed the large horizontal tail fins found on the 1960 Galaxie and replaced it with a smaller fin on the ’61 version that rode higher on the rear deck and was considerably more subtle than a fin on a 1960 Galaxie.

The 1961 Galaxie’s front end was a radical style departure from the ’60 Galaxie, but it was not as removed from the 1962 Galaxie front end in terms of appearance. However, the rear deck on the 1962 Galaxie was distinctively different from the ’61 model and now sported taillights that were positioned close enough to the bumper to require retooling it to include the rear lights.

The 1963 Ford Galaxie models returned to the straight edge look on the rear end and moved the taillights up from the ’62 model’s low position within the bumper back up to the top of the rear quarter panels on the newer model.

The trend toward a retooled rear deck continued with the 1964 Galaxie. The ’64 models had modified rear quarters that once again gave a slight slant to the rear deck and appeared to subtly wrap around the taillights that were still positioned high on the back end of the Galaxie.

All style bets were off when the 1965 Ford Galaxie debuted in dealerships. The front end of the car underwent a radical change that featured stacked vertical dual headlights and replaced the horizontal headlights found on previous Galaxie models.

Additionally, the rear end of the ’65 Galaxie bore little resemblance to the 1964 model because the taillights no longer resembled round rocket exhausts. Instead, they had four sides in a bulged-out rectangle shape that strayed away from the circular shape of earlier models.

The radical style change found in a 1965 Galaxie was subtly changed in time for the 1966 version of the big Ford. The result was a slightly re-tooled model that was clearly related to the 1965 Galaxie, but with squarer taillights on the ’66 Galaxie.

The 1967 Ford Galaxie also shared a strong style lineage with the 1965-66 models, although the rear deck and roofline of some models leaned subtly toward the then-current fastback look. The taillights were also retooled into a large, more rectangular shape that extended into the rear bumper.

The 1968 Ford Galaxie went against the style grain because most of its makeover took place on the front end of the car when the company went back to horizontal headlights from the three-year vertical headlight run. Ford also offered a hidden headlight choice in its high-end Galaxies in 1968.

Ford reverted to a familiar pattern in 1969 when they redesigned the rear end of the car and offered a taillight configuration that was smaller and squarer than a ’68 Galaxie’s long vertical taillights and rode high on the rear deck. The fastback version of the 1969 Galaxie was also different from the ’68 in terms of C-pillar structure and did not fit directly around the rear window.

The dawn of the 1970s seemed to be a game-changer for the Ford Galaxie because it became more of a luxury car than a sporty car. The rear end of the car was changed and once again the taillights were at the bottom of the rear deck indented into the bumper. The lights were also smaller rectangles in their new position on the ’70 Galaxie.

The debut of the 1971 Galaxie demonstrated Ford’s attention to the front end of the car in terms of style. The ’71 Galaxie had a redesigned snout that bore a resemblance to its Thunderbird stablemate with its pronounced centerpiece in the grille.

The 1972 Ford Galaxie continued its trend as a large luxury car and was not dramatically different from the ’71 Galaxie in terms of overall style.

The game changed the next model year for the Galaxie because 1973 was the first year for bumpers that could withstand 5 mph crashes and were required equipment on North American cars. The bumpers stood out like a sore thumb on every domestic ’73 car, including the Galaxie models.

The ’73 Galaxie’s front grille was also modified and did not extend outwardly as much as the 1972 Galaxie models. The rear taillights also underwent a significant change in 1973 and gained some ornamental bling in the lenses.

What goes up must eventually come down and the Ford Galaxie was no exception to this basic rule. The model performed well in terms of sales, but Ford wanted to push its LTD models after 1974 and the Galaxie became a casualty of their decision to pare down to one luxury Ford.

Consequently, the 1974 Galaxie had no future in the Ford lineup so the ’74 version was, for all intents and purposes, a rehash of the ’73 version to round out its 15-year run.

The Ford Galaxie reached the end of the line in 1974-but it was a shining star for many years in the Blue Oval family.