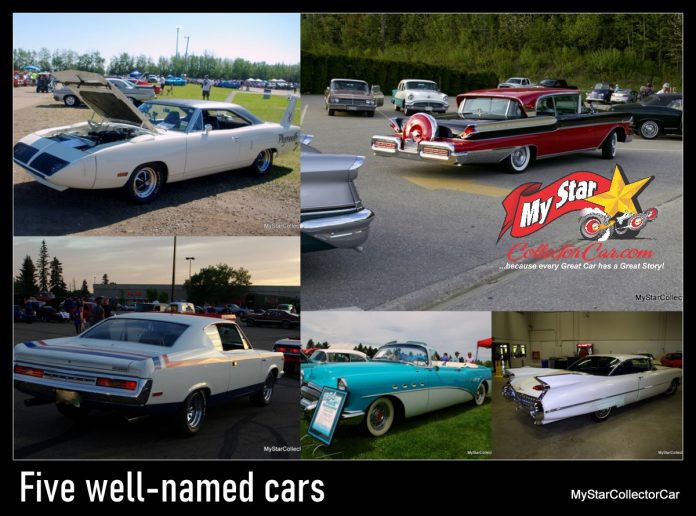 A car name is an important part of its overall vibe in our opinion here at MyStarCollectorCar, so we would surmise the naming process was a critical component of the vehicle’s marketing strategy in the past.

The first memorable name on our list is the Mercury Turnpike Cruiser, arguably one of the most uniquely designed cars built during the late 1950s. The Turnpike Cruiser was only around for two model years (1957-58) but its name celebrated America’s movement toward fast and efficient interstate 4-lane highway systems, an ambitious transportation project that was eventually undertaken by every state.

The “Turnpike Cruiser” name was an open celebration of this ongoing process and the car model that bore the unique name was built to handle the fast pace and higher speed limits of the fledgling 4-lane highway. The Mercury Turnpike Cruiser was only built with muscular V-8 versions that ranged from 368 cubic inches to a massive 430 cubic inch engine. The Turnpike Cruiser also offered a Mopar-like push button automatic transmission to its buyers.

The car’s unusual roof design included vents at the top of the car’s A-pillars on its windshield, along with a slanted rear window that rolled down and allowed a free flow of air front to back at freeway speeds.

The 1957-58 Mercury Turnpike Cruiser is a solid addition to our well-named car list.

The second member of MyStarCollectorCar’s esteemed list is the Buick Roadmaster, even though the name was used by GM from 1936 until 1943 and resurrected in 1991. Our favorite versions of the Buick Roadmasters were built between 1946 and 1958-with special emphasis on the 1950s versions because of their increased horsepower that made these Buicks genuine masters of the road.

The 1954-58 Roadmasters also looked the part in our humble opinion here at MyStarCollectorCar, mainly because of their large-and-in-charge style that was both intimidating and cool.

The third addition to our well-named car list is the Cadillac De Ville, a famous luxury car name that surfaced as a Caddy sub model trim package in 1949 and became a standalone model in 1959 with the famous Coupe De Ville that year.

The two-door hardtop ’59 Cadillac Coupe De Ville had amazingly tall rear tailfins that made it the most famous version of the car and a runaway favorite in the car hobby. Incidentally, the elegant De Ville moniker means “On the town” in French, a name that was well-suited to this cosmopolitan luxury car.

The fourth car on our list is the 1970 Plymouth Superbird, a wild-looking muscle car with an aerodynamic snout and a giant rear wing that was built to lure Mopar King Richard Petty back from the evil clutches of Ford’s racing program.

The move paid off for the Chrysler boys because Petty did indeed return to their NASCAR racing family, even though the Plymouth Superbird was only a one-year wonder in terms of production. Nevertheless, the car lived up to its Superbird name in a big way because it blew by Mopar’s Road Runner in overall performance and style.

The fifth and final car name on our list is AMC’s Rebel Machine, a muscle car from one of the other smaller guys in domestic cars-and another one-year wonder built in 1970. One of the most notable features of the Rebel Machine was its red-white-and-blue paint scheme, although the Machine was eventually available in a more conservative scheme.

American Motors wanted to provide a mid-sized muscle car for its loyal buyers, but the Rebel Machine was unable to secure enough sales to justify another year of production, so AMC shelved the car. But not before the unlikely muscle car made a huge splash with car guys. These days the limited production Machine carries a sizable price tag because of its rarity.