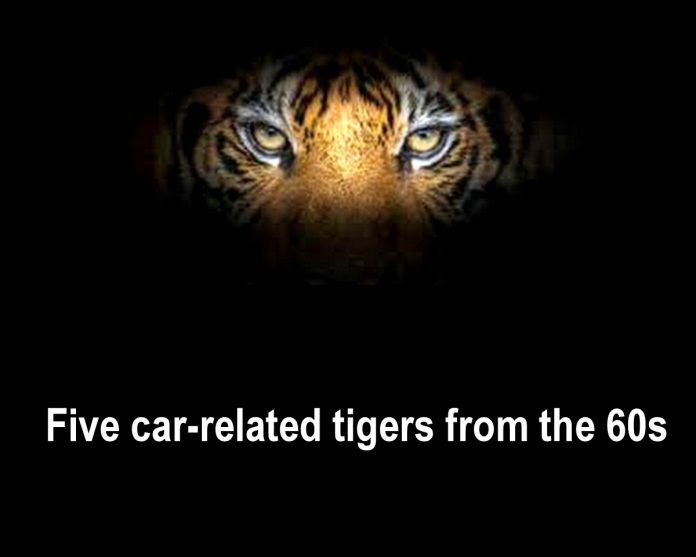 Tigers got plenty of press during the 1960s, mainly because they were the main stars in many famous marketing campaigns, along with a popular country song that was inspired by one of the ads.

It is possible Tony the Tiger blazed a trail when the likable cartoon cat debuted during the early 1950s as a Kellogg cereal icon and set the breakfast table for subsequent tiger marketing campaigns because of his success.

One of the most complicated tiger campaigns was created by Pontiac, particularly with its mid-60s GTO models. The 1964 debut of the GTO brand was intended to add a European flair to the Poncho muscle car, but the GTO name became associated with the “Goat” nickname and ruffled feathers at General Motors.

GM attempted to steer away from the goat label, mainly because a trash-eating barnyard animal was not their idea of the perfect mascot for a high-performance vehicle built by the General. Their animal choice was the tiger, an apex predator that hunted and killed its prey.

Pontiac’s Tiger campaign included the GeeTO Tiger, a very limited-edition muscle car that is the stuff of legends in the car hobby. Ultimately, Pontiac’s Tiger marketing had a successful sales run-but did not eliminate the Goat label in the world of car guys, most of whom never viewed the name as an insult in the first place.

Our second famous Tiger campaign is Esso’s “Put a Tiger in Your Tank”, an idea that caught fire with the public during the 1960s. The Esso campaign included a cartoon tiger mascot that evolved from a lovable Dr Seuss-style image into a more aggressive beast image in 1964. It was likely no coincidence that Esso wanted to introduce a more ferocious tiger during the early days of the 1960s muscle car era.

One of the non-car tiger entities is our third addition, mainly because the song had strong automotive influences since it was inspired by the Esso campaign: ‘I’ve Got a Tiger by the Tail’, a Top 40 tune penned and sung by Buck Owens. The late country singer was heavily influenced by Esso’s tiger and decided to create his famous song after Owens spotted an Esso sign while he was on the road.

Our fourth tiger choice is the Tiger Paw tire used on performance vehicles during the 1960s. The Tiger Paw was an aggressive tire that was built for use on muscle cars during the Sensational Sixties. Tiger Paws from the 1960s do not hold a candle to modern tires in terms of performance, but older car guys will remember Uniroyal’s famous ad campaign that featured a car/tiger cartoon hybrid that had long claws instead of tires.

The claws provided an incredible grip in cartoon version, but undoubtedly canceled a few car guy’s tickets when these gullible clowns attempted to recreate the Tiger Paw’s cartoon performance on real roads.

The fifth and final addition to our tiger list in another car: the Sunbeam Tiger. The Sunbeam Tiger may be familiar to some of MyStarCollectorCar’s readers because famous 1960s TV spy/buffoon Maxwell Smart owned one.

HISTORICAL TIRE CHOICES DO NOT BELONG ON EVERYTHING