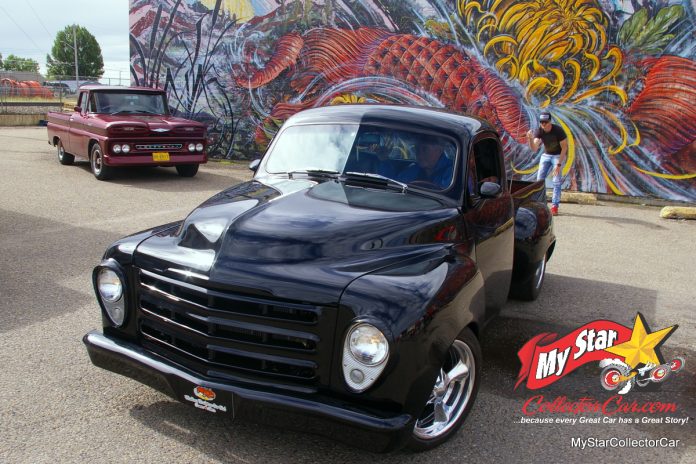 Lyle and Judy Keturakis are the proud owners of a stylish 1953 Studebaker custom truck, but Lyle is quick to point out the mentorship of his late car guy buddy Barry Green’s role in the project.

The project began as an idea when Lyle decided to tackle a vintage truck project and Barry steered him toward a Studebaker truck because they had bigger cabs than other domestic pickup models built during the early 1950s.

The search for a good project truck started with a Studey pickup that needed too much work in Barry’s opinion, so they used it as a donor when Lyle bought his ’53 Studebaker truck.

The two car guys went old school and used a 1979 Chevy Suburban as the base platform for the truck project. There are massive engineering differences between a ’79 Chevy Suburban and a 1953 Studebaker truck, but Barry and Lyle had an excellent game plan for the project.

The Suburban’s frame was shortened 22 ½ inches, while the Studebaker’s box was cut out and raised to accommodate the upward angles in the donor chassis.

Lyle was able to obtain the shelving from a supermarket and mold the metal into a custom tailgate for his Studebaker truck. He also purchased trailer fenders from a discount automotive store to use as rear wheel tubs for the beefed-up Studebaker truck and placed the filler cap on the right side so Lyle could use the Suburban’s gas tank.

The electric wipers on the truck were donated by a 1953 Chevy because the wiper motor unit fit into the Studebaker’s under-dash area. The rear-view mirrors were originally on an El Camino and required a little shaving so the truck’s vent windows could clear them.

Lyle wanted plenty of horses under the hood, so he wedged a massive 496 Chevy bored-out big block into the Studebaker’s engine compartment. The engine produces a modest 600 horsepower, according to Lyle.

The 700 R-4 transmission transfers all that muscle to a Ford 9-inch rear end with 3:88 gears. Lyle added cruise control to his Studey truck because he did not want to gas-pedal the truck on long trips after he completed the build.

Incidentally, the project took 18 years from start to finish under the watchful eye of Barry. Lyle added that Barry told him “I’ll help you-but I’m not doing it for you”, very early in the project.

Lyle liked the idea because he wanted to learn as he advanced into the build process and knew Barry was a “resto-mod genius”, in his words.

The truck has a mild roof chop and Lyle was able to use some of the components from the donor Studebaker truck during the process. Other extra custom touches include 1953 Buick headlights and ’66 Pontiac taillights on the Studey’s rear end.

As mentioned earlier, the project took about 18 years to complete, but Lyle and Judy have many years (and miles) hitting the open road in their resto mod truck.