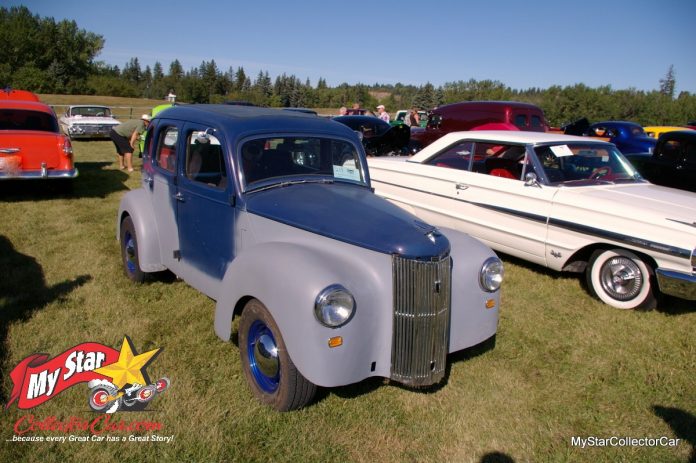 A 1948 Prefect is not a common sight in the 21st century- on either side of the Atlantic.

These British-built compact Fords answered the bell for North American car buyers who wanted a vehicle that was smaller and better on gas than a domestic car built in 1948.

Bruce Hore will celebrate 40 years of Prefect ownership in 2022, enough time to change the performance game with his 1948 Prefect 4-door sedan. Bruce’s adventures with the Prefect began when he decided to relocate from his home in Ontario Canada to western Canada many years ago.

The decision included the Prefect, so Bruce had to rewire the car within a 24-hour time frame in order for it to pass a mechanical inspection. He was successful and began a series of improvements with the Prefect to ready it for the road.

His first order of business: improve the Prefect’s overall performance so he yanked its anemic factory four-banger and installed a Chevy 4.3 liter V-6 to give the light Brit compact a giant horsepower increase.

Bruce bolted the modern engine to a 700 R-4 Chevy automatic overdrive transmission and ran the Prefect’s newly acquired power to a Mustang II rear axle that required wider rear fenders to accommodate the Ford rear end. He also added a Mustang II steering assembly to the car, although he had to narrow the system by 10 inches to make it work on the Prefect.

The Prefect’s handling and performance has improved immensely after the changes, but Bruce also included a modern front disc/rear drum brake system to slow the Prefect down whenever the situation warrants it.

The Prefect project is a solid blend of new and old automotive technology. One example is his wiper system because the car still has vacuum wipers instead of more modern electric wipers. The Prefect’s speedometer is also original, but Bruce added a variety of gauges that monitor the engine’s vital statistics.

The car still has its factory steering wheel, but Bruce moved away from the original semaphore B-pillar signal light arms and instead installed a full-fledged signal light system on the car, complete with four-way emergency flashers.

Bruce’s Prefect only had one brake light on the rear end, so he added two 1939 Ford teardrop taillights to the car, along with a modern brake light installed at the base of the car’s rear window. Modern drivers are used to the high brake light and are less likely to rear end the Prefect at red lights.

The car has been upgraded in many ways, but it still cools down passengers through its moveable windshield and front side vents that can be opened manually by the Prefect’s passengers.