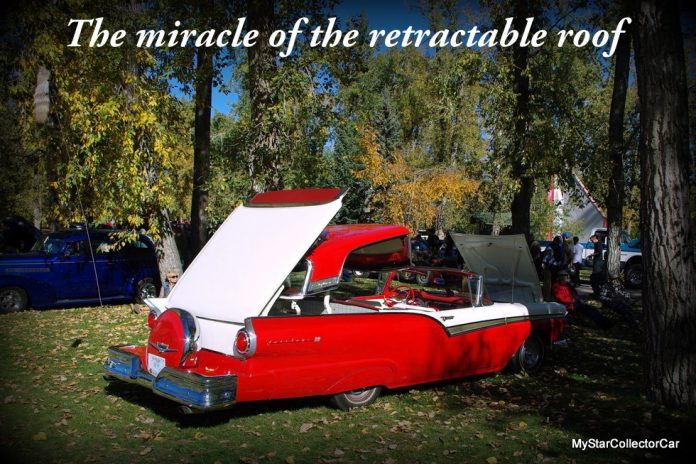 Most people are aware of the convertible concept as it applies to the automotive world.

Convertibles allowed their owners to enjoy some fresh air, sunshine and excessive wind noise while on a road trip.

The convertibles were built with lightweight cloth fabrics that were relatively easy to raise and lower, either manually or with the able assistance of power. The convertibles occupied a niche in the overall market and offered the open-air option for any customer who wanted to enjoy nature at 60 mph.

Convertibles held less charm for potential customers who lived closer to Santa’s address and encountered winter at its finest and coldest. Consequently, the roof was typically left in the ‘up’ position (by Northern Hemisphere owners who bought these niche market cars on a brash impulse) during the long period of sub-freezing temperatures in any of the sub-polar regions.

The Blue Oval boys decided to design a retractable metal roof for its 1957 Ford models and ran with the idea for two more model years. Bear in mind the retractable roof concept was not an easy engineering feat for the Ford people because it was based upon available 1950s-era technology and required a very complicated process to move a heavy metal roof into the trunk region of these iconic cars.

The shopping list for the retractable metal roof included 600 feet of electrical wiring to handle the components that went into the unique drop top design. There were 10 power relays in the tin roof recipe and they were in place to direct traffic for the electrical current.

The retractable roof’s wiring system also had 10 limit switches to prevent any over-extensions of the mechanical components during the roof-up or roof-down phases of the metal drop top’s operation.

No electrical system would be complete without a way to interrupt malfunctions such as a short circuit situation, so the Ford retractable roof included circuit breakers (rather than mere fuses) in their engineering design. The circuit breakers were beefier than a fuse and were able to cope with the extra amount of juice required to move the roof up and down.

The extra stress on the electrical system was largely due to the seven motors needed during the convertible process. There were three drive motors to move the roof, along with four lock motors to secure the roof in place-or in the trunk.

Most people likely believed the roof was guided into place by a hydraulic system-but they would be wrong because the roof moved via a series of cables and shafts. The process began when the driver hit a switch on the steering column that subsequently activated switches on the deck motor and raised the trunk in a backwards direction compared to other vehicles.

The lid moved fully into the up position and triggered a switch that raised the package tray and initiated an unlocking motor for the roof. The unlocked roof engaged two motors that raised it and directed the roof into the truck area.

The entire procedure was dependent upon a succession of events and could be brought to an immediate halt if any of the system failed to deliver its required actions to the next part of the system.

The good news is the retractable roof systems also had a emergency manually-operated crank to lower the top if it failed during the process. The even-better news is the system proved to be dependable for the owners and caused surprisingly few problems-despite its very complex engineering.

The day of the Blue Oval company’s retractable roof is long past because the last Ford equipped with a drop top metal roof left the factory 60 years ago.

However, the legacy of this remarkable convertible exists at car shows to this very day because these Fords are truly rock stars in today’s world.