A famous American automotive design firm named Marcks-Hazelquist-Powers was a significant player in the look of Detroit’s finest from the past. They were creative and definitely thought outside of the box when it came to innovation.

A 1968 Motor Trend article captured the spirit of this firm when they revealed a design concept that turned a Ford Thunderbird into a 5th wheel hauler.

In fact, their concept car/trailer package included a luxurious 33 ft trailer that contained all of the creature comforts of home, including 2 double beds, entertainment center, patio and bath. 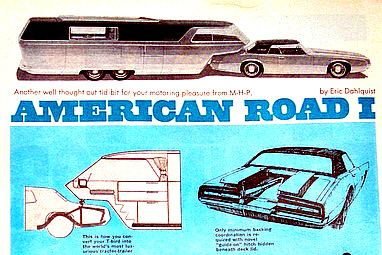 They named it The American Road 1 and MT’s writer called it a “yacht you know-for the highway”.

The T-bird’s trunk lid was replaced with a 3- piece unit that allowed a hitch to be placed on a frame closer to the rear axels for a better weight distribution. The guidance rails in the trunk ensured that the trailer hitch found its way to the ball, regardless of the driver’s skill levels. 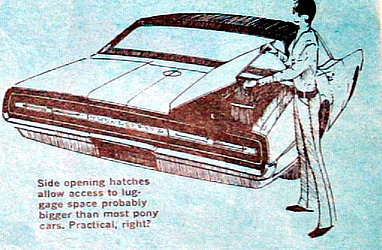 It made sense in an era when cars pulled holiday trailers, but the T bird’s highway gears and the weight of the 33 ft trailer likely meant that the car would go through trannies like pints of oil through bad piston rings. 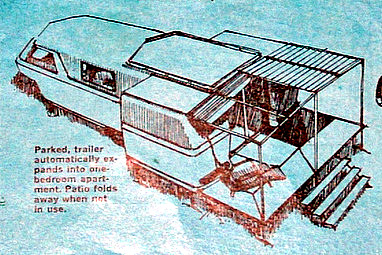 However in 1968 the idea made sense in a general way. The car could haul more passengers in upscale Thunderbird style and comfort while the trailer would provide first class lodging. A stranded family with a burnt-out T-bird transmission would definitely make use of the trailer. 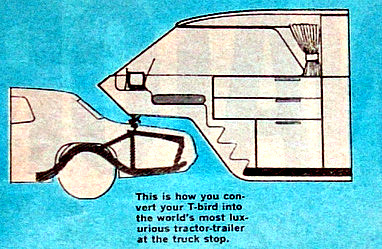 These days even bigger holiday trailers are hauled by monster factory trucks with big torque diesels under the hood. A big trailer is a light workout for the big boy trucks and nobody bats an eye at the sight of this combo passing everybody on the road.

But the sight of a vintage Thunderbird doing time as a fifth wheel hauler would turn plenty of heads-then and now.

KEEPING YOUR COOL: IT ISN’T ALWAYS HOT FUN IN THE SUMMERTIME...