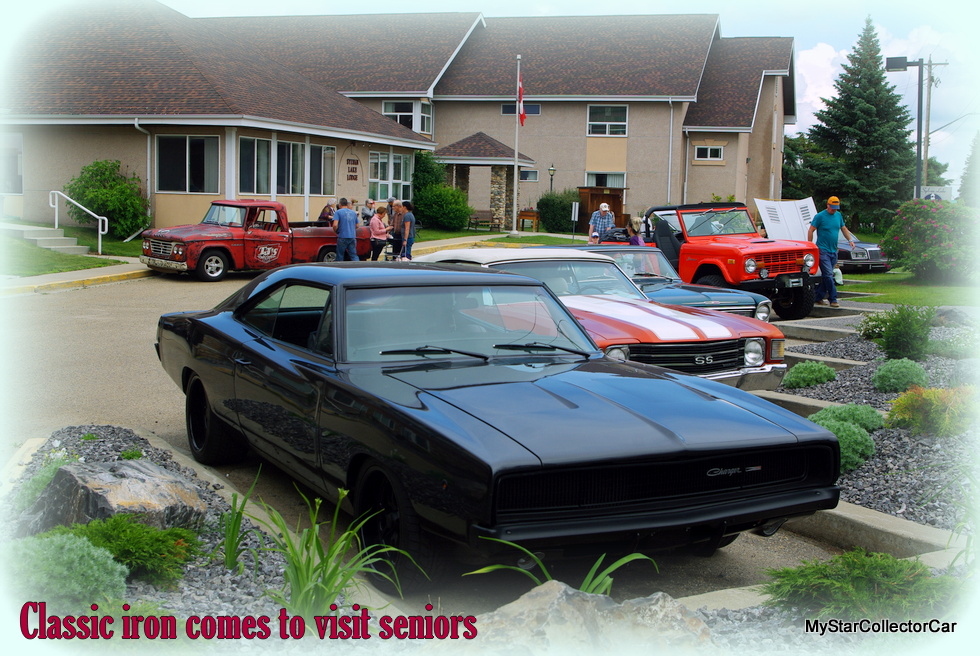 One of the things MyStarCollectorCar has learned over the years is car guys have a strong sense of community and are willing to go the extra mile in that capacity.

Sometimes it may be as simple as a battery boost and sometimes it may involve a car show at a senior facility to give the residents their own private automotive event. 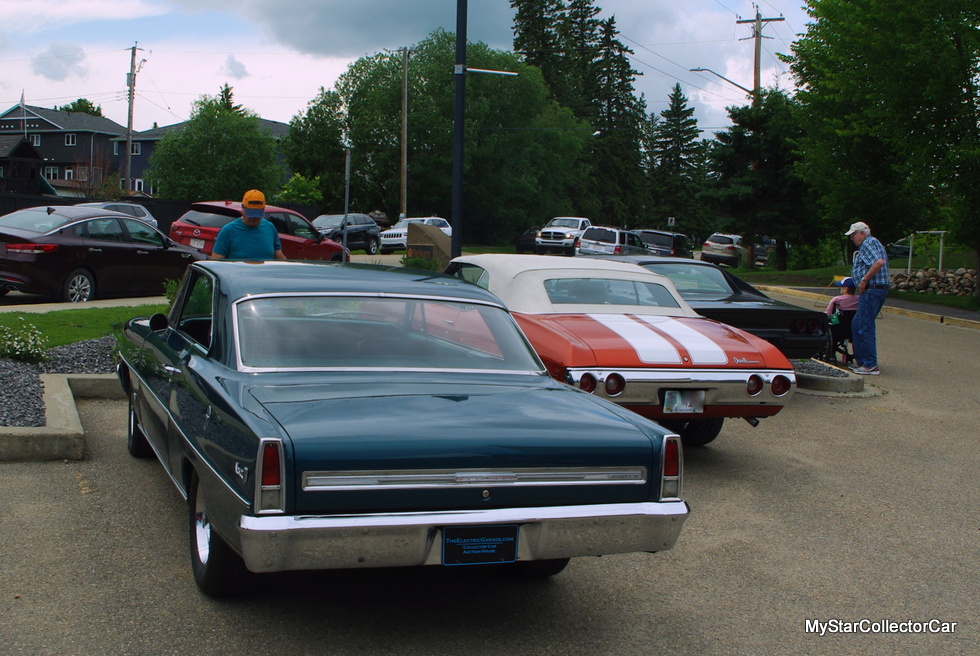 Todd and Lindsay Schwindt are former teachers who have built EG (Electric Garage) Auctions into a Central Alberta-based powerhouse in the vintage vehicle sales business. Both of them are car people who are active in their community and like to give something back when they have an opportunity.

Last year they hosted a car show at a senior extended care facility in their town and invited the local car guys to the event. The response was very strong and overwhelmed the parking capabilities of the facility so Todd and Lindsay revised the numbers for their 2nd annual show this past Sunday. 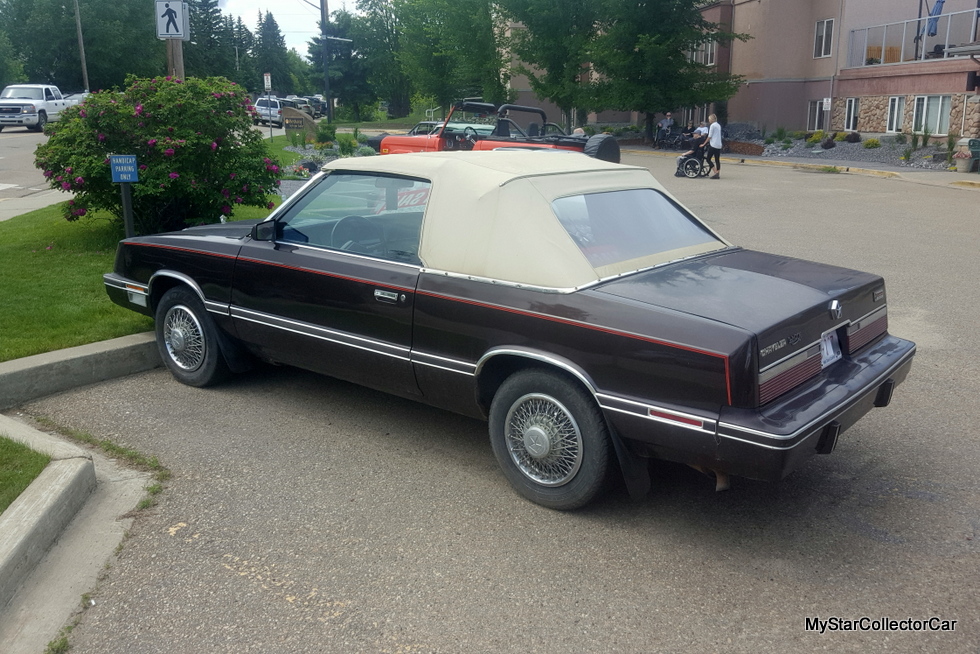 This year the Schwindts decided to use some of their own vintage vehicle inventory in the show and keep the parking issue at a manageable level. They always have an impressive array of vehicles and this year’s event included a variety of entries that ranged from a classic Ford Bronco to a couple of lights-out resto mod/pro street beauties (a 1968 Charger and a 1969 Camaro) as stars of the show. 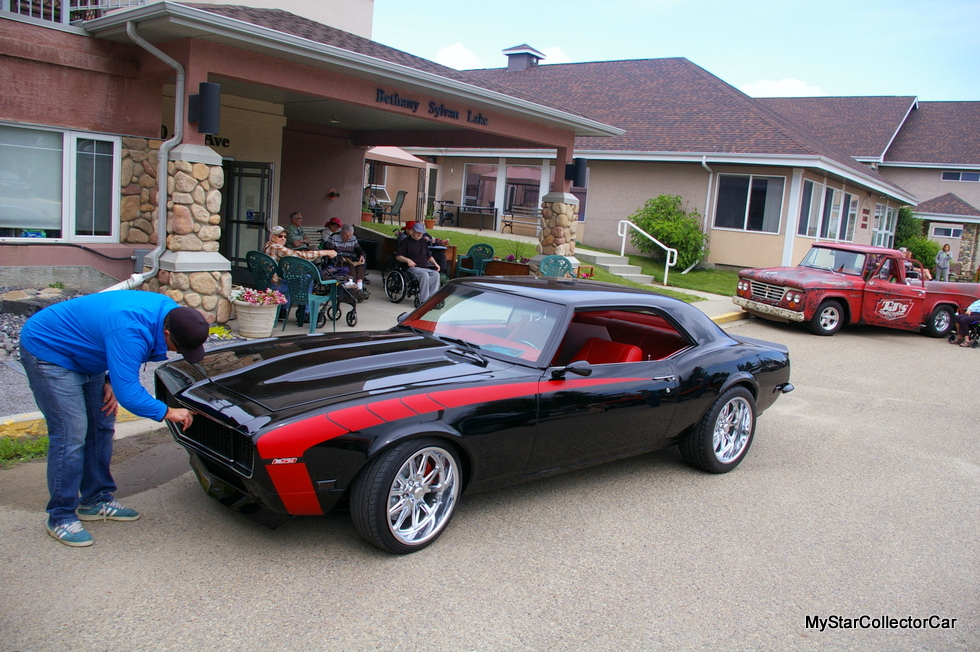 The automotive stars were ready for the show, but the weather gods in Central Alberta are unpredictable in early July so Sunday morning looked like a no-go for their show. The threat of rainy and severe weather was on the horizon for their area and the Schwindts decided to postpone the show. 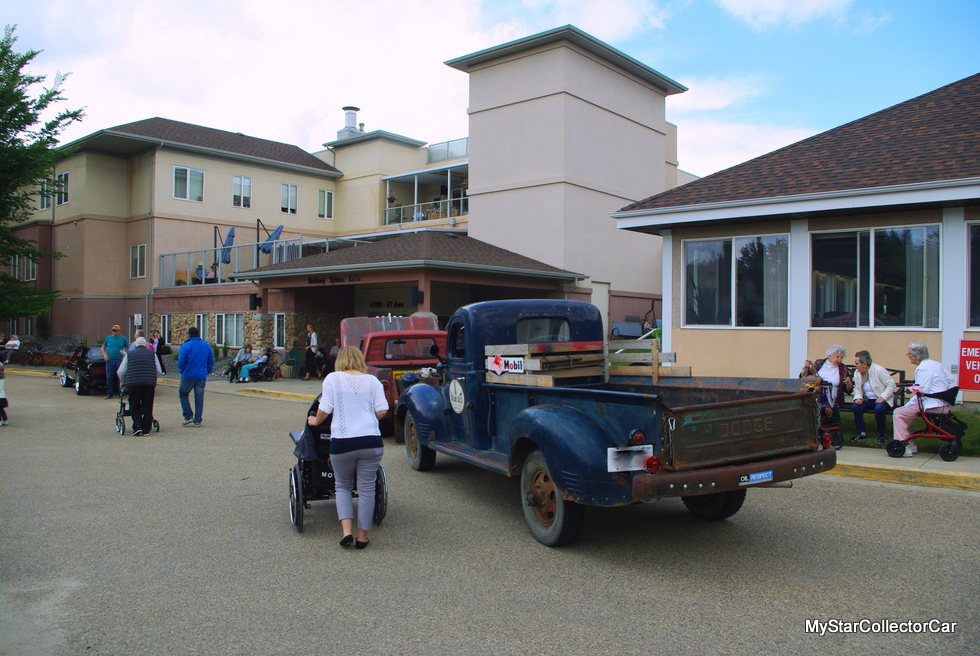 A call from an employee at the care facility changed their minds when the woman relayed information about the high excitement level the event had generated with the residents and their visiting families. The news from the employee prompted the Schwindts to forge ahead with the show, despite the risk factor involved with unsettled weather and vintage vehicles. 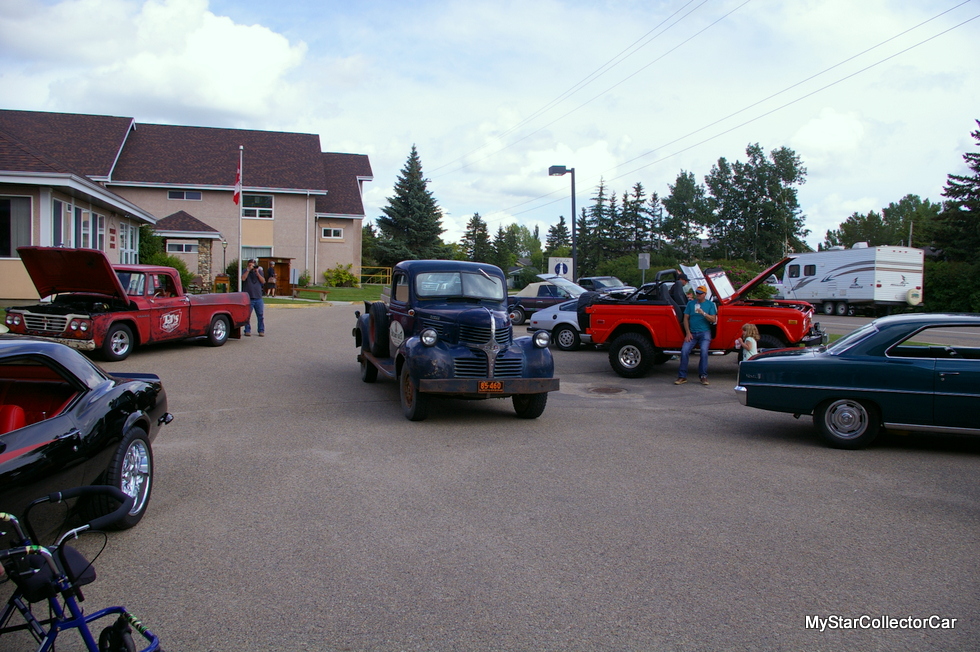 The arrival of the cars did indeed generate serious excitement for the people at the care facility and, even better, the afternoon was mild and without any serious weather events. 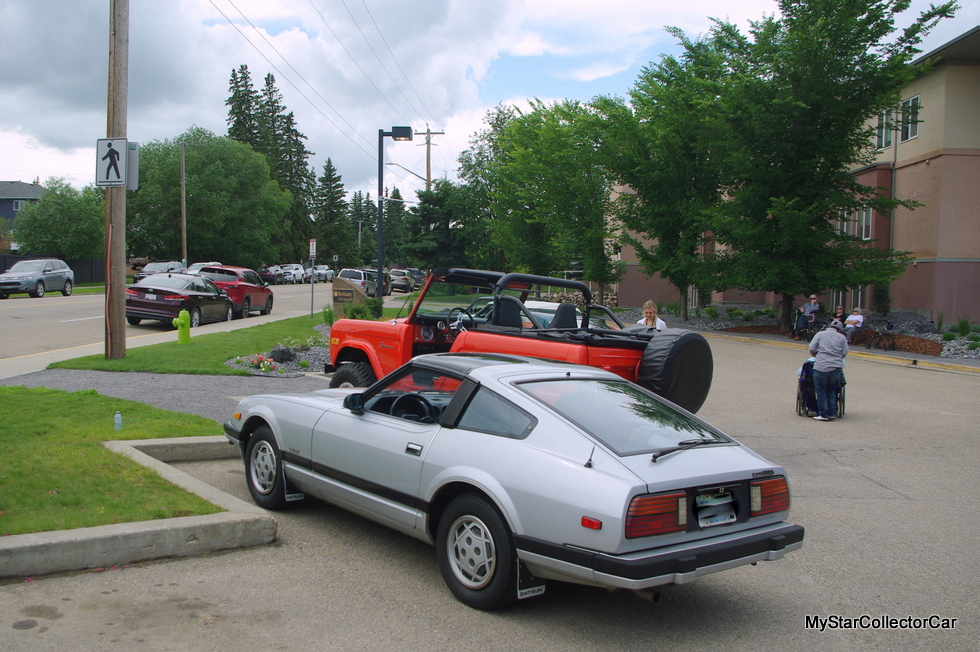 The appreciation factor by the spectators was very strong at this car show because they were treated to a wide array of vehicles that were built during an era when the residents were younger car guys.

One resident noticed the Bronco and compared it to the International Harvester Scout because he was a long term employee at an IHC facility when he was a younger man. 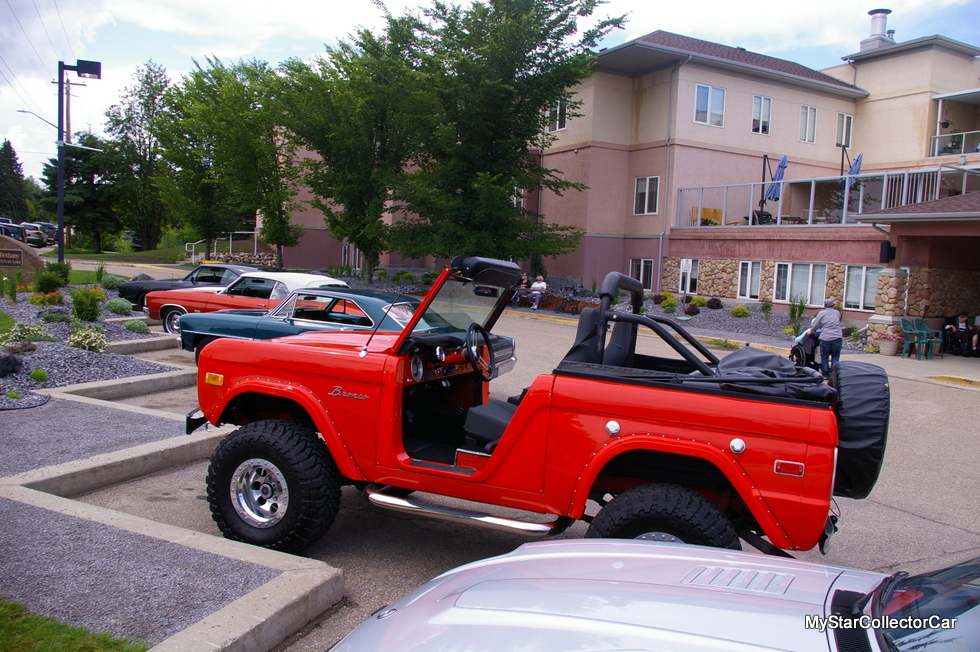 The arrival of a 1946 Dodge 1-ton truck also marked the arrival of a vehicle that was not part of the Schwindt family fleet at the show. In fact, the truck was owned by one of Lindsay’s former students and will be the subject of a future MyStarCollectorCar article. 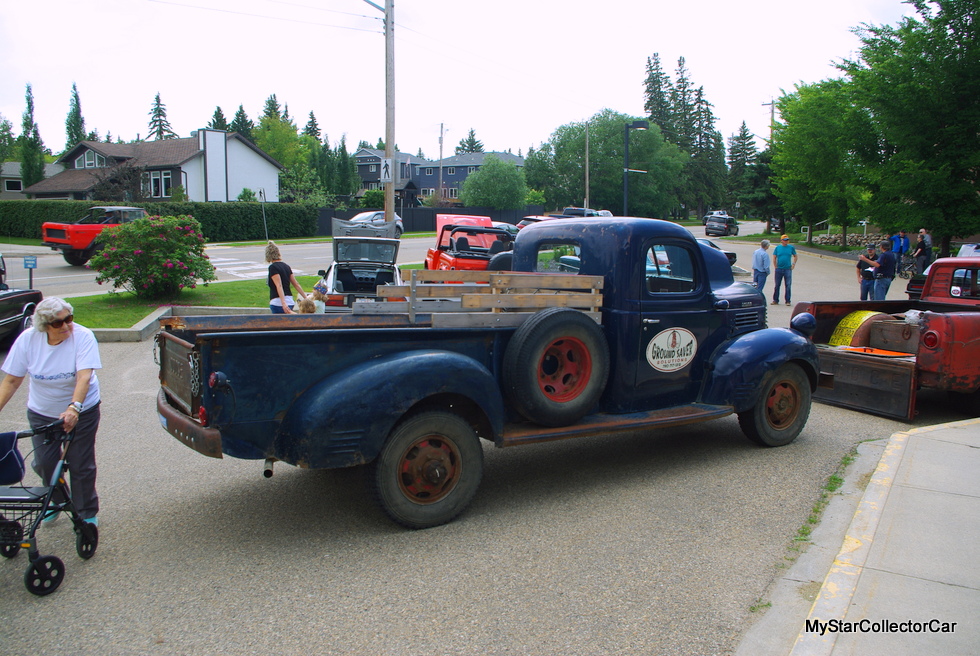 Incidentally, the vintage early 1960s Dodge shop truck is part of the EG Auction family and is still undergoing some alterations to make it the coolest shop truck in the country. Stay tuned for its story in a future MyStar feature. 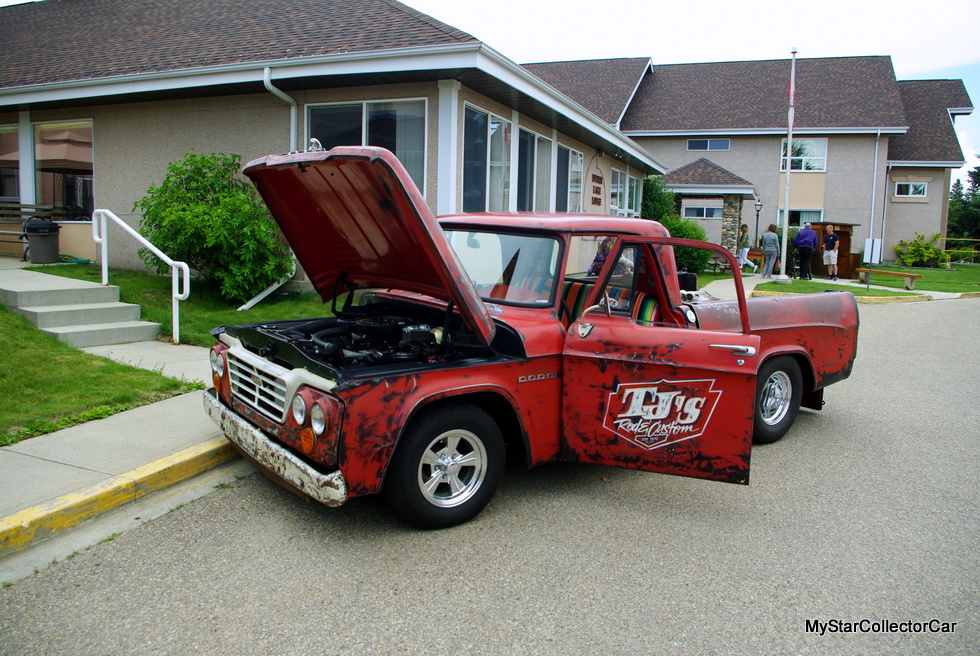 Lindsay and Todd Schwindt have taken a completely different road in life from their teaching days, but the new business is a great fit for them. Particularly when they can use their business in a community-minded way.