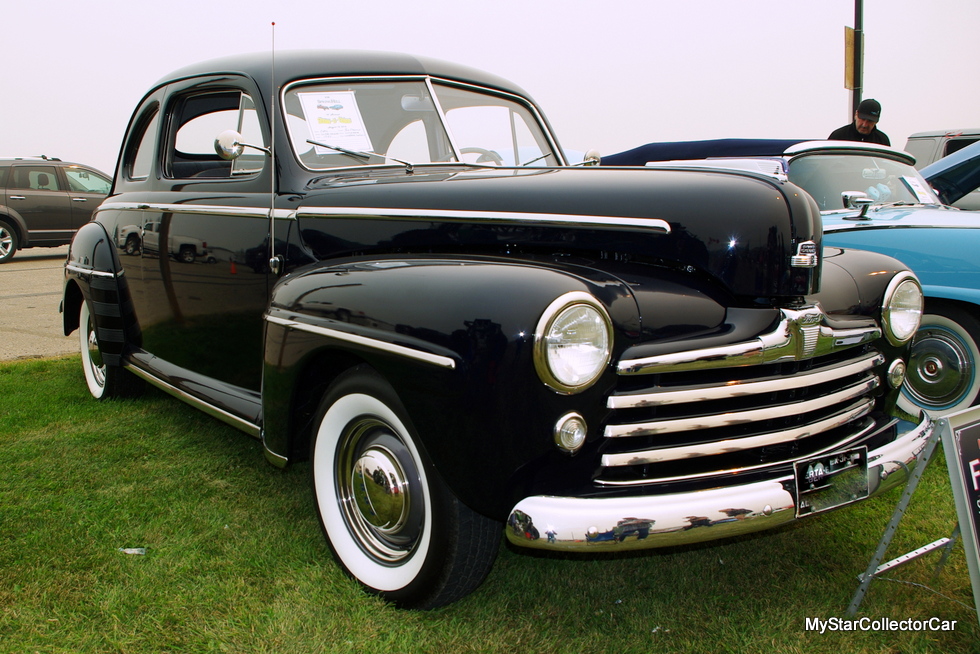 Ford cornered the market in the 30s and 40s with iconic cars like the Deuce Coupe ’32 Ford and the legendary ’40 Ford.

Hot-rodders loved these cars because they had built-in style and a number of them came with a factory flathead V-8. 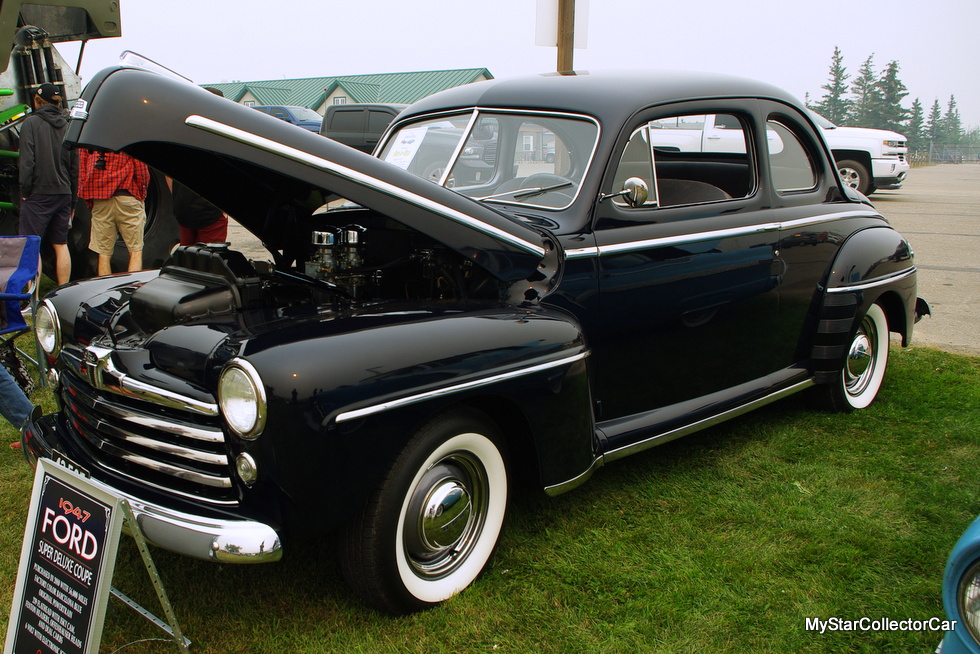 Post-war Fords didn’t enjoy the same press as the much-loved ’32 and ’40 Fords until the shoeboxes in 1949 but that doesn’t mean the ’46-’48 Fords were toxic to car guys–they were just less popular. The war stopped design in its tracks so there was a big gap between what was on the books for future design and what Detroit could build at the time. 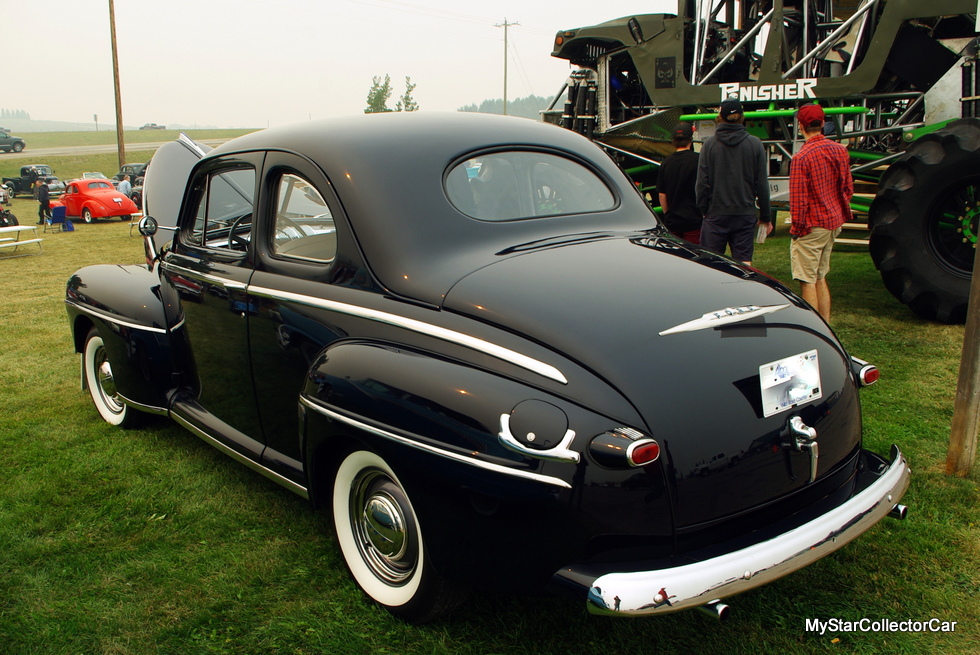 The Big Three brought out the same basic bodies, added a few minor cosmetic changes and told their advertising guys to sell yesterday as today. At the time, there was a waiting list for new cars because of pent-up demand so Madison Avenue didn’t have to work very hard.

Ted French is a car guy who prefers the post-war Fords because he thinks they’re, “better than a ‘40” in terms of cabin space and other refinements. Ted was looking for a post-war Ford coupe or convertible when he found this low-mileage (47,000-mile) ’47 Ford Special Deluxe Coupe in Spokane, Washington 11 years ago.  Ted is the fourth owner of this beauty and he was reasonably happy with its condition when he took delivery. 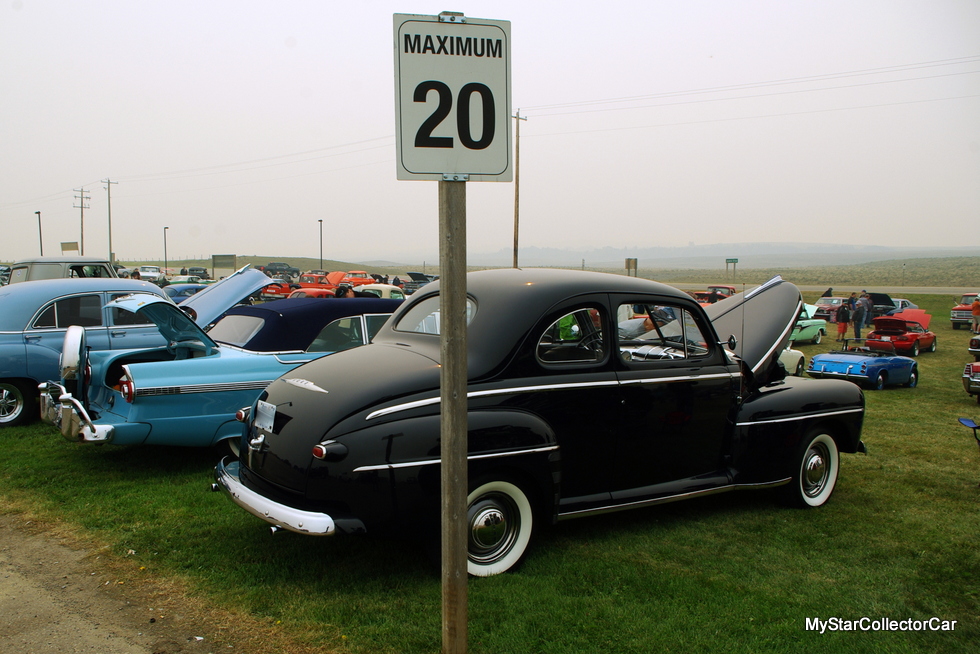 Ted drove the car home and ran it until 2014. There were a few things he wanted to change or upgrade and the paint was the first issue. The car was a lighter shade of blue but Ted matched the factory paint on the cowl so now the old Ford is a much darker factory blue. The body was in good shape but the center rockers needed a little help. 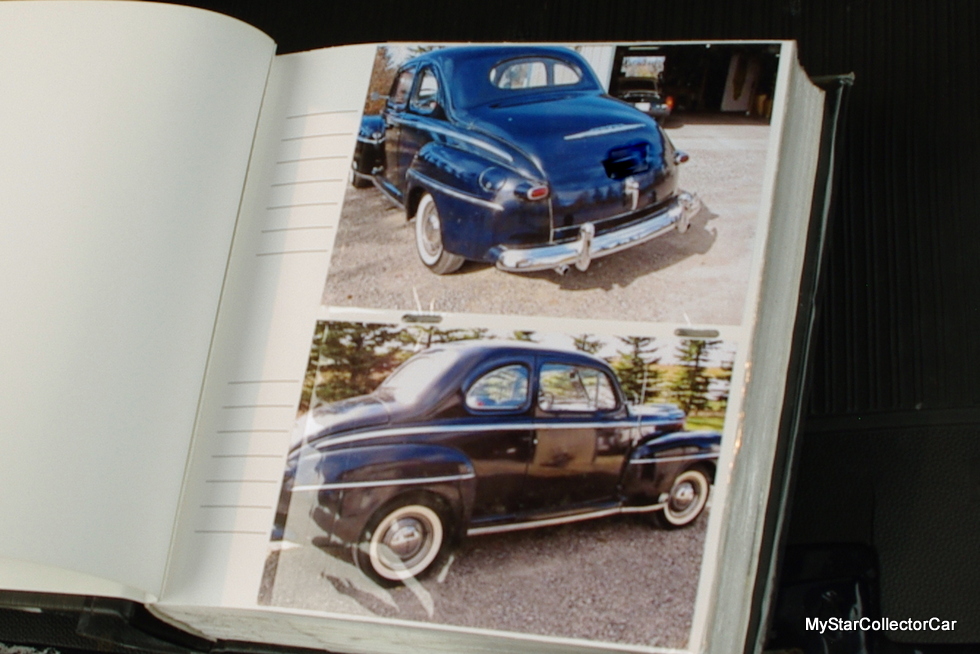 Some of the stainless trim was in bad shape so Ted replaced them and the rest was treated to a polish. Ted was really happy with the interior and he admitted, “it was already done” when he got it. The factory radio and clock are still working. 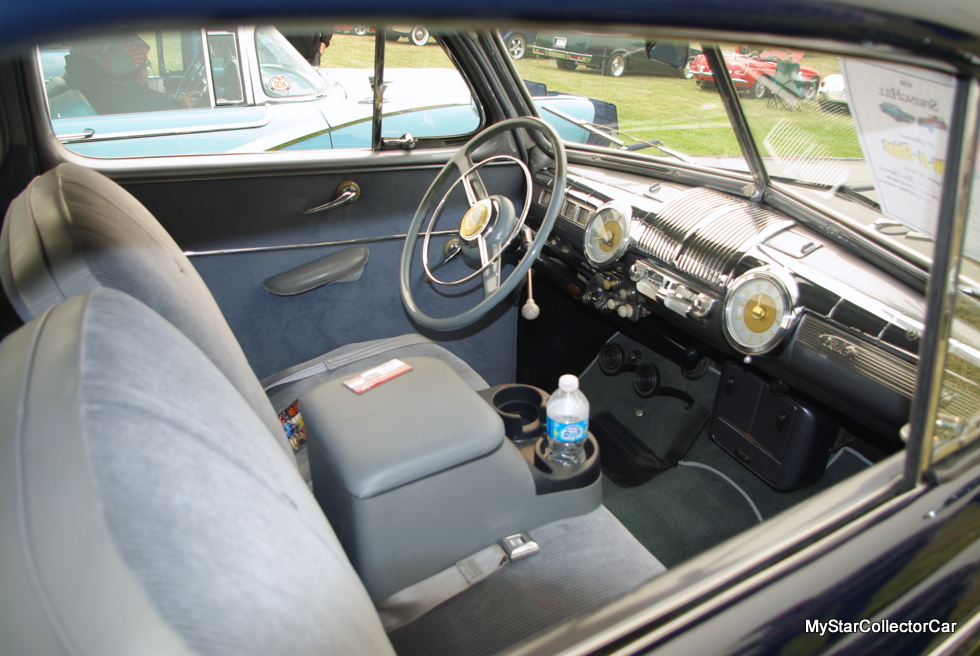 The Ford also had a clutch issue plus the engine some major work so there was a flurry of activity on the mechanical side in late 2017. Ted rebuilt the engine and found out he had to sleeve one cylinder and he added the dual-carb setup to give the car to a period-correct performance upgrade. 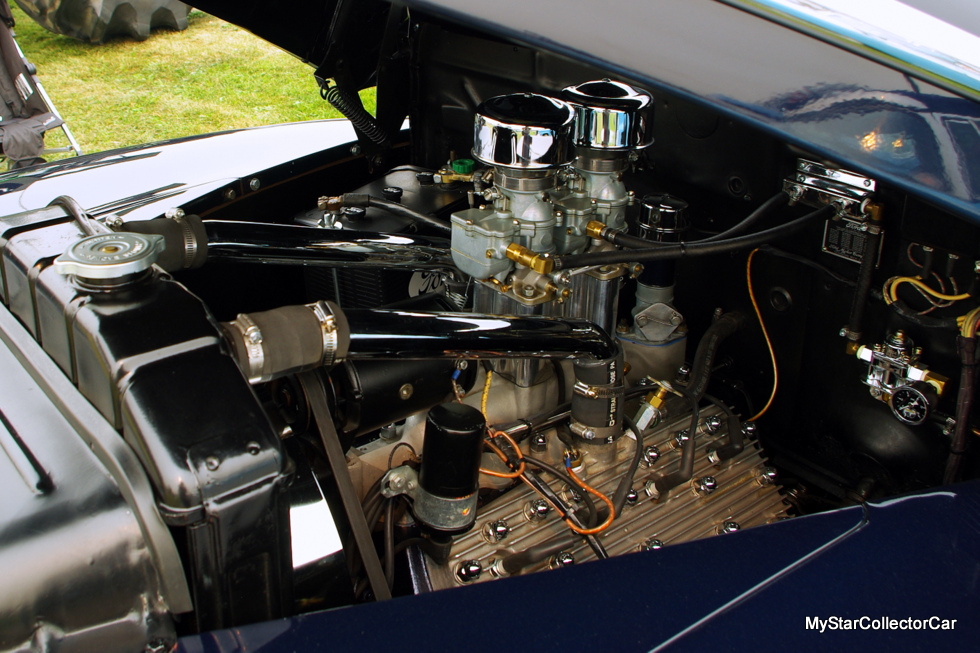 Ted bought the car to enjoy it and so far it has really passed the test. He upgraded the wide white bias-ply tires to radials but that’s the extent of his departure from factory stock circa 1947. He runs the old Ford at a comfortable 60 miles per hour so he’s not pushing the 72-year-old classic past its factory limits. Despite the heavier demands for speed in 2019, this old Ford doesn’t need the extra pressure on its flattie engine. 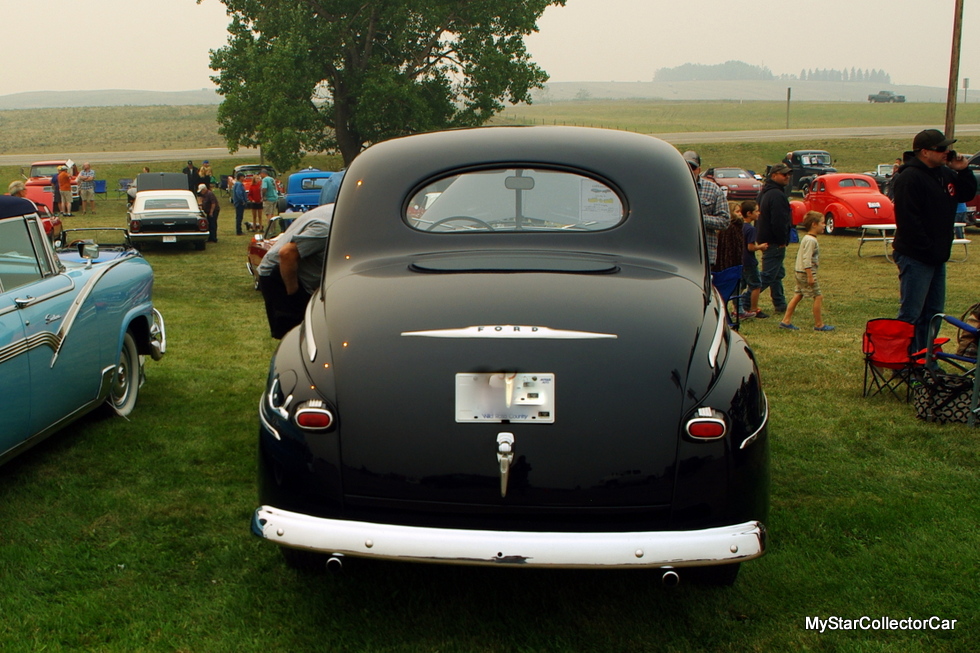 His only comment on the experience behind the wheel is simple—“It drives like a 40s car”. The upside is the gas mileage because he said, “It goes pretty far on a tank of gas”. 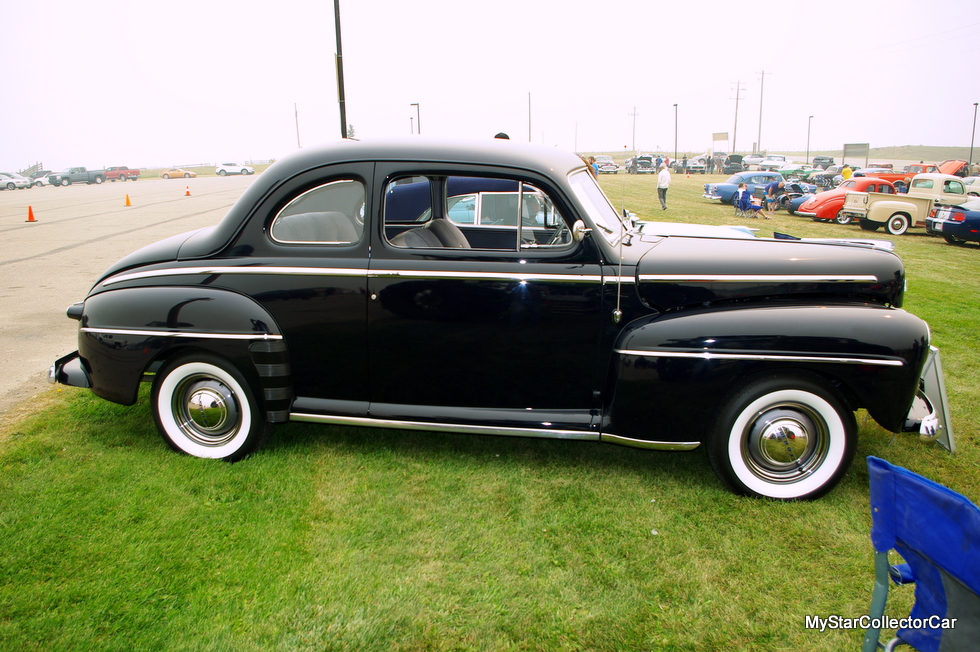 Ted’s old Ford has a pretty easy life in 2020. He hits a few car gatherings per week and the odd car show on the weekend so this ’47 runs at a leisurely pace.

The best part of this story is this post-war ’47 Ford gets the same care and attention that most car guys give to a ’40 Ford.