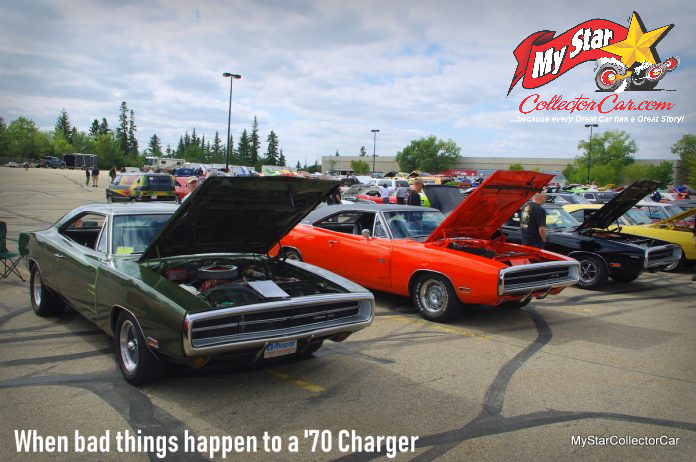 There are occasions when I receive a link to a story that is so unbelievable that I question whether it’s even a true story.

The ’70 Charger was crushed by its owner because this clown was unable to sell the car and decided to vent his frustrations on a 50-year-old car. Even worse, this child in an adult’s body videotaped the event and narrated the carnage along the way.

His babbling included a reference to Harvard and insinuated this moron attended the prestigious Ivy League school. If so, Harvard has a lot of explaining to do about their open-door policy for admission, but I would bet heavily against this clown as a Harvard man.

The crux of the matter was his misadventures trying to sell the car. Apparently, he had plenty of tire-kickers and no-shows during the months prior to his meltdown, so he decided to destroy the ’70 Charger with a large forklift operated by another genius.

Consequently, Mr. Ivy League quarterbacked the car’s destruction game plan and instructed the forklift operator about how and where to wreck the Charger while the owner filmed and narrated the event. He decided to go with a scorched earth policy wherein he wanted to damage every possible body part on the car, presumably to teach the car guys who had wronged him a valuable life lesson.

The lesson was akin to a five-year-old kid’s reaction when he decides to grab his toys and go home. The kid would at least have underdeveloped social skills because of his young age, but an adult who crushes a vintage car because other adults were mean to him has no excuse in my opinion.

I have no idea about how many truthful facts were included in Harvard Boy’s rant during the forklift incident, but I do know the woods are full of flakes when it comes to selling a vintage car. I am no stranger to the vintage car hobby and have encountered more than my fair share of annoying dreamers and schemers during the old car sales process.

I have also experienced many anonymous “buyers” who think the fine art of negotiation includes a round of insults and low ball offers while hidden behind a keyboard. At no point did I feel any urge to crush the vintage ride and narrate my childish behavior while I filmed the incredibly stupid carnage.

That is how things work in adult world. There are too many idiots and not enough good reasons to worry about the morons who want to waste your time in the murky world of vintage vehicle sales.

No logic could explain why this Charger owner chose to destroy his car in the world’s worst “That’ll teach them” moment.

But that will happen when you live in a logic-free zone inhabited by morons where rational thought is crushed by a big forklift.