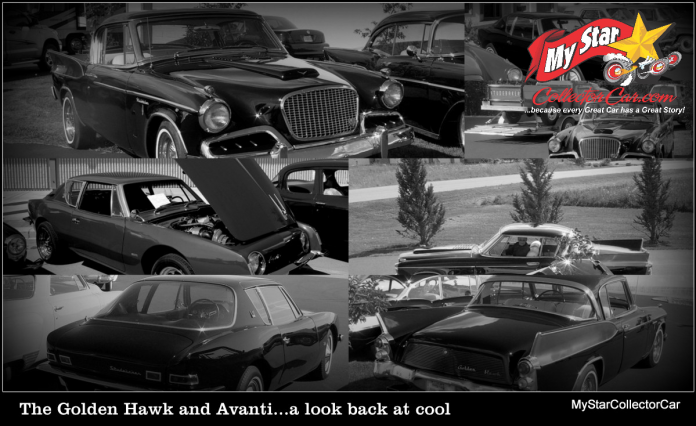 Studebaker was always the lovable underdog in the domestic car market.

Delusions of grandeur aside, Studebaker created some very cool cars over the years, including their sunset years as an auto manufacturer. Studebaker officially left the building as a car builder in 1966, but not before the company manufactured the Golden Hawk (1956-58) and Avanti (1962-63) models. The two iconic Studeys have grown into legendary status since their brief manufacturing runs ended somewhat abruptly due to sluggish Golden Hawk sales and fatal Avanti production difficulties.

Studebaker’s small size meant the two halo cars had a small window of opportunity to help the struggling car company avoid drowning in red ink-but were unable to become a financial life preserver for it. Instead they were a financial boat anchor for Studebaker and helped hasten its ultimate demise.

However, the Studebaker Golden Hawk and Avanti models will always be a part of automotive history because of their unique style and engineering. A small car company like Studebaker was forced to think outside of the box to achieve success on a shoestring budget and the two models are ample proof the company was able to reach an incredible innovative standard with limited funds.

The Golden Hawk was created during the fabulous finned era of the 1950s, an automotive period when prominent tailfins dominated North American cars, jets and ICBMs. The Golden Hawk was a good example of Studebaker’s ability to create cars on a microscopic budget because it was based upon earlier Studebaker models.

The 1953 Studebakers had an advanced style that was ahead of the Big Three during that period, but their trailblazing style had to compete with the big boys for several years. Meanwhile, the Big Three car builders were able to completely redesign their vehicles and welcome the age of the tailfins by 1956.

Studebaker also tweaked the performance on their 1957 Golden Hawks with a supercharger boost on their small block 289 V-8s that turned them into road rockets sporting great tailfins. Many car guys would agree the Studebaker Golden Hawk was one of the hottest cars built during the 1950s. The only problem with the car was its woefully ice-cold sales record that eventually froze the car out of the Studebaker family by 1958.

Studebaker was seriously bloodied but not yet bowed by the Golden Hawk’s nosedive into oblivion and introduced the Studebaker Avanti in 1962. The Avanti was a fiberglass-bodied sports coupe model because Studebaker wanted to build a radically new styled car-and metal sculpting was not an option due to high cost barriers.

Molding the Avanti into a then-futuristic sports coupe style was easier because it did not use metal, so Studebaker could shave costs. Studebaker also threw a supercharged small block V-8 into their Avanti models (in similar fashion to the deceased Golden Hawks from a few years earlier) because nothing was wasted at the struggling car company, including proven mechanical technology.

Sadly, the Avanti was an excellent example of a great idea that was plagued by huge production issues. Studebaker was unable to build Avantis at a cost-effective pace and still retain quality standards. The cars represented the company and Studebaker did not want to produce a crappy car because it would be unable to survive any downturn in sales due to negative publicity.

The little car company from South Bend, Indiana died a horrible death only four years later (1966) in Hamilton, Ontario Canada and one could argue the Avanti helped drive Studebaker over the financial cliff after the Golden Hawk steered the company in that direction during the late 1950s.