The mid to late 1970s are generally regarded as uninspired years for Detroit, but the passage of time adds nostalgia to the equation.

Now the big luxury barges of the disco era are so unique they’re cool.

This MSCC Star of the Day Chrysler Newport has a direct connection to Father’s Day.

It’s an automotive inheritance passed down to occasional MSCC contributor Angus Sutherland from his dad and he’s taking it on a road trip later this year.

Look for a chronicle of his adventures in a future MSCC piece later this summer.

MSCC JUNE 14 STAR OF THE DAY: THE PERFECT GOODBYE FOR A CAR GUY 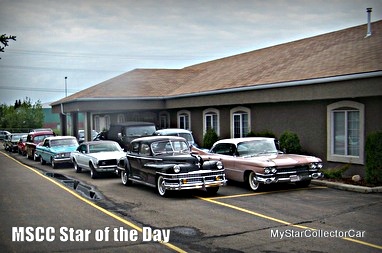 There are many different ways to salute a lost member of a group and each one is an acknowledgment of what made that person part of the group.

Fighter pilots like to use the “missing man” formation to say goodbye to a colleague while police and firefighters use dress uniforms and emergency vehicles to pay respect.

This is a gesture steeped in tradition, based on respect and it is a very visual display that defines the essence of the car hobby because the car hobby is such a tight-knit, community oriented world.

This MSCC Star of the Day picture was taken yesterday at a memorial for a real car guy.

MSCC JUNE 13 STAR OF THE DAY: ’53 CHEVY – COOLNESS WAS ACHIEVED AFTER A DECADE OR TWO 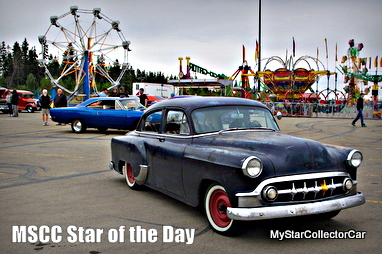 The fifties had a lot of extremely cool rides but some of them took a decade before they were accepted hep cat-mobiles.

Early 50s Chevys were cheap and plentiful back in the late 50s and early 60s, so you could pick one up, knock a few holes in the muffler, drop its ride height, get rid of the hub caps and you’d achieve instant cool for about 300 bucks.

These early 50s Chevys could graft cool on the biggest nerd in high school if they were done right.

This MSCC Star of the Day ’53 Chevy at a show last year shows how it was done right.

MSCC JUNE 12 STAR OF THE DAY: 1970 COUGAR ELIMINATOR – THE CAT JOINS THE FIGHT 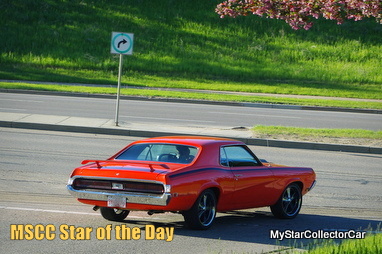 Cougars were a more refined version of the Mustang so they never enjoyed the cult following their Ford cousins had back in the 1960s.

They were a heavier, softer, more comfortable pony car so their target audience was a guy who wanted something sporty with AC and a good ride.

Shelby Mustangs were a little too wild for Cougar buyers.

Despite their gentile appearance, Cougars did enter the muscle car wars with the Eliminator package in 1969.

This MSCC Star of the Day 1970 Cougar Eliminator in traffic a few days ago showed how well gentile morphed into muscle.

MSCC JUNE 11 STAR OF THE DAY: COMPACT RAT ROD – FOR THE URBAN REBELS 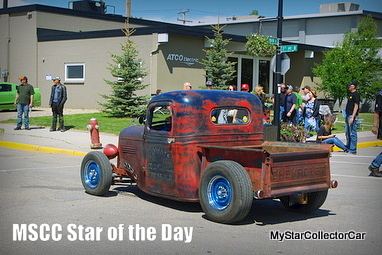 One of the trademarks of a rat rod is an extended wheelbase and most of that comes from a suicide front end.

This setup extends the wheelbase to the point where your front wheels take the brunt of any impact.

The rattie guys like the traditional low, lean and long look – it’s the four wheel equivalent of a chopped Harley.

Despite the widespread appeal of the stretched wheelbase, some urban rat rod guys need something with a little more room for limited road and parking space in a big city environment.

This MSCC Star of the Day rattie at a show last Saturday and it clearly was built for the urban rat rod guy. 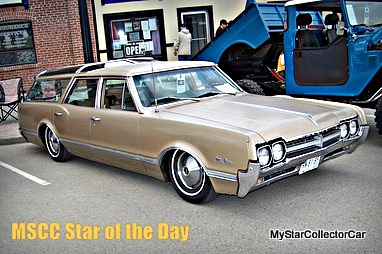 Baby boomers were sentenced to years in the back seats of barebones sedans, weird foreign compact sedans or large station wagons.

Few rode in the back seat of an SS396, Hemi Charger or Mustang GT.

The sixties were a more colorful extension of the 1950s, but they were still relentlessly practical years so kids had to have realistic expectations of what was cool.

This MSCC Star of the Day ’66 Olds Vista Cruiser was a dream ride for baby boomer kids because it had that cool roof, a big engine and a certain amount of flair…for a wagon.

It wasn’t a large SUV with a vast array of video games in the back seat, but it was the next best thing to a GTO back in 1966 for a kid on summer vacation.

MSCC JUNE 9 STAR OF THE DAY: WHEN IN DOUBT PICK A BLACK 2ND GEN CHARGER 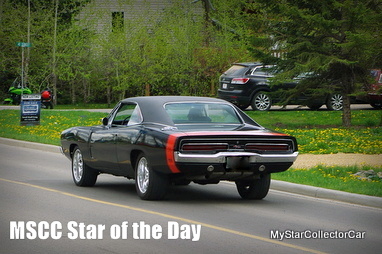 What happens when you pair an iconic car with an iconic color like black?

The answer is found here.

There are few classic rides that travel in the same world as the 2nd Gen Chargers and a black 2nd Gen Charger is at the top of the old iron food chain.

The evidence is in this MSCC Star of the Day picture from late May.