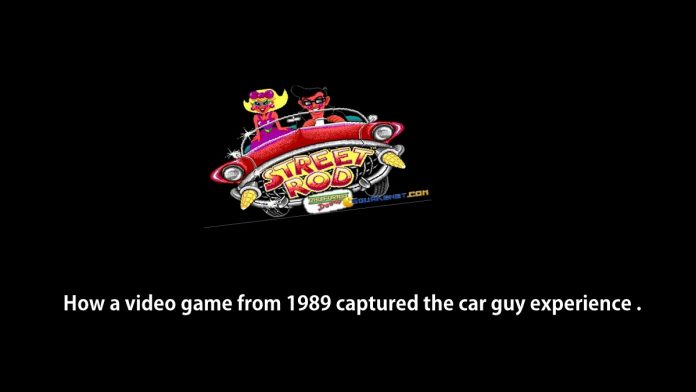 Video games have evolved since the late 70s-early 1980s arcades – those are the ones I remember.

The Street Rod video game was set in 1963. They gave you a realistic budget for the era ($750.00) and the goal was to rise through the ranks by buying, building and selling cars. The concept is reasonably accurate, because 750 bucks would definitely get you in the game – not the fuelie Corvette game, but you could find something to run back in ‘63.

The first step was to get your driver’s license by filling out your name on the license.

The second step was to find a car the old-fashioned way – scan newspaper ads and find a car that fit your budget.You worked within your budget, so the ’63 Corvette was far beyond your price range at 3770.00. Most guys opted for the more affordable fixer-uppers like the $455.00 ’56 Merc.

Your budget was the key to success, so you had to buy affordable parts for your project and install them. If you failed to do that (done with virtual tools under the hood) the car wouldn’t run. You also had to keep an eye on your bank account because if you drained it dry, you were in a very weak position.

For example, you had to keep enough money to put gas in your car. Fortunately, this was 1963, so 3 or 4 bucks would fill your tank. The gas station is also where you found the guys you wanted to race so you could accept or reject the challenge – and so could the challengers — because they could reject you after a  little trash talk.

Eventually, you had to accept a challenge because you just spent your last few dollars, so a race was the only way to fatten up your bank account. If you picked the right guy you generally won the race – either at the drag strip or on public roads. The bets ranged from “just for kicks” (nothing) to 50 bucks at the drag strip to 100 bucks or a pink slip (your car) on the road race.

Most guys got past the first stage and that’s when the value of your car went up, so the next step was to flip it and find another car. The process was simple – accept or reject the offer and move on with a bigger bank account.

The key was to move up the ranks by upgrading, winning, selling your cars, and building your bank account. Your ultimate goal was to be the King – complete with the King’s girlfriend. That was the upside.

The downside was you could end up in jail because you were out of money. The road race had occasional police chases with whopping fines if you didn’t stop, so if your bank account was empty, you went to jail.

Let’s recap. Street Rod made you work on a tight budget, buy realistically priced cars, work on them yourself and there was always the risk you could run out of money or go to jail if you raced them.