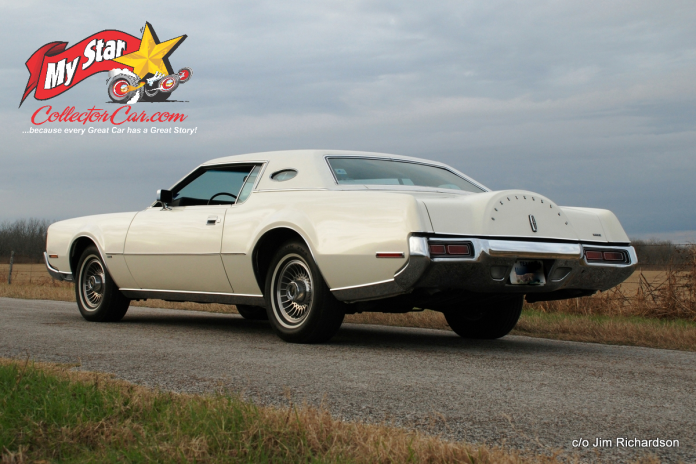 The Lincoln MK III debuted in 1969 as a personal luxury car aimed directly at the Cadillac Eldorado.

The MK III was followed by the MK IV in ’72 and this Lincoln carried on the tradition of comfort and style in a unique package.

Jim Richardson made the big leap into muscle car status for his ’72 Lincoln MK IV, but it took several decades. He explained the early history of MK IV: “I bought the white on white car with dark blue leather seats in 1975 when I was 27 years old living in Houston, Texas. The car had belonged to a girl friend who had driven it since new. From the moment I saw the Mark IV I loved its classic lines with a long, low profile .Other eye-grabbing styling features were the Rolls Royce “waterfall” style grill, big, open wheel wells and unique “opera windows” (these were actually an option in 1972)”.

Jim bought the car as a daily driver and he stuck to the plan: “The car just oozed luxury and was such a dream to drive. Over the next six years the Mark IV was my daily driver and it saw some very “un-Lincoln-like” duty, including numerous camping and fishing trips. I even used her as the tow vehicle for my VW-powered dune buggy which spent many hours on Matagorda Beach in the late ‘70s”.

There were a few close calls with the Lincoln: “I even came close to losing the car in the late 1970s, when a wind-blown grass fire in the parking lot at an outdoor rock concert in Austin almost got her. The fire burned completely under the car and bubbled the paint on the front license plate, but somehow the car was spared”.

The Lincoln went into semi-retirement: “In the mid-80s I started a job that took me on a number of overseas work assignments so the car saw a lot of garage and storage time over the next two decades. She had gotten pretty bad condition and most people would have parted with the car vs. spending the time and money to restore her”.

Jim couldn’t let the car go: “I think there is an emotional connection that overrides logic in these decisions, and I couldn’t seem to let her go. In 2007, I decided to put the money and effort into fixing her up. I wanted to preserve the original look of the car so there are no modifications to the exterior, and the interior is totally original and in great shape for being 40 years old”.

The mechanical side of Jim’s Lincoln was another story: “Almost perfectly timed with the car reaching 100,000 miles, in October 2007 the restoration began with having the engine replaced. The original 460 cu.in. engine had only 212 HP when new (due to Federal de-tuning) and was now getting pretty tired, plus I wanted some real performance”.

Jim went the hot rod route and found a junkyard donor: “I had grown up in the muscle car era and wanted to see if I could put some kick in the old girl. I purchased a junker, 1971 Mark III “rust bucket” I found sitting in a weed patch. The ’71 Lincolns had a high compression engine which had a factory rating of 365 brake HP. I had the ’71 engine rebuilt to produce around 450 HP and 550 torque. The engine was bored 0.30 over, has ported and polished heads with oversized stainless-steel valves, balanced/forged pistons, rockers, ceramic coated custom headers, dual exhausts and more”.

Jim’s Lincoln responded to the updates: “The stock, long-legged 2.80 open rear end was replaced with a 3.50:1 Traction-loc unit to give the car faster response and much-needed grip. The suspension is essentially stock, with more aggressive shocks and high-performance polyurethane bushings. The car weighs almost 5,000 lbs., but now it will really light up the rear tires. I now have the proverbial Hot Rod Lincoln”.

The body was next: “At this point I had the “go” but now needed the “show” to match. There was surface rust under the paint and vinyl top was really getting bad, so I bit the bullet on a repaint and new top. There was a three-month frame-up restoration on the car. The car was media-blasted and completely stripped to bare metal then acid washed to remove some serious surface rust. With the installation of the new white vinyl top on the stock white two-stage paint, the 2-year restoration was basically done”.