We told the horrific story about Doug Kind’s loss of his beloved Vega street monster a few years ago on this site.

A lowlife robbed a 7-11 and managed to pile his ‘borrowed’ minivan into Doug’s parked Vega during a police chase.

Somehow this guy was able to total the minivan, Vega and also leave heavy damage on two vehicles parked behind the Vega while, in a cruel twist of fate, sustaining no serious personal injuries.

Unfortunately Doug was restrained from changing the health status of the lowlife. 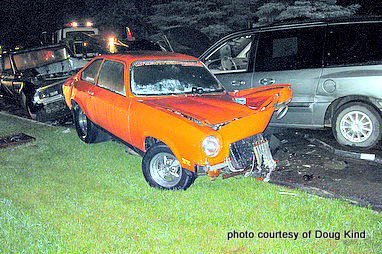 However the unlucky Vega sustained fatal injuries in the crash and left Doug with a high performance 355 Chevy heart in need of a donor car. Doug was able to remove the engine from the front seat of his crushed Vega and begin a new game plan with it.

Maybe it was appropriate that Doug gave the engine a home under the General’s banner so that a Bowtie brother of the Vega could fight the good fight on the streets.

The result was a lime green street rocket that compelled Doug to comment “It’s alive!” (his words) when he first fired up the 355. In retrospect, that borrowed line from an early Frankenstein movie was also highly appropriate when he kicked it over in the Vega.

Either way, Doug was the mad scientist that had created a monster of the street variety.

Doug realizes that his lamented Vega has been forever lost to his scrapbook of fond memories, but part of it will live on in tire-melting fashion in his flashy S-15.

The story of the traveling 355 is far from over because the S-15 is a placeholder for a 1951 Studebaker Champion that will become the next recipient of the traveling mill. Doug’s timeline for the Studie is still a few years in the future.

Until then, the S-15 will honor its fallen Vega predecessor with a few victories in the street wars.

Many more stories at– https://www.mystarcollectorcar.com/