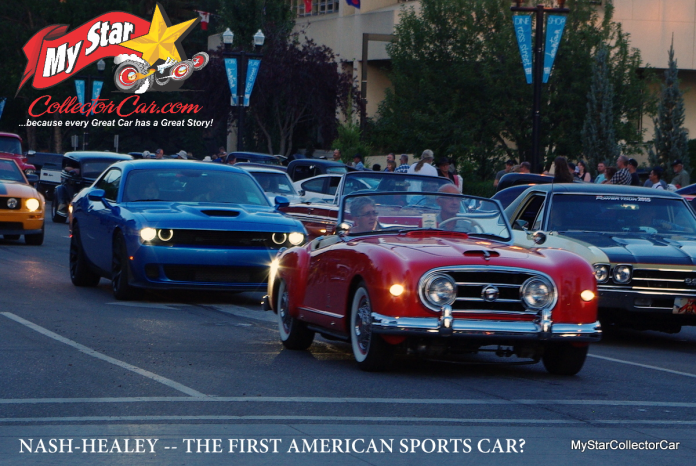 Playboy and Corvette both debuted in 1953 and our best guess here at MyStarCollectorCar is there were already men’s magazines before the iconic Hefner publication.

Therefore, we are even willing to research the early Fifties adult male magazine topic if necessary.

The car in question was the Nash-Healey and it was a collaboration between British sports car builder Donald Healey and appliance king/auto maker George Mason of Nash-Kelvinator fame.

Donald Healey wanted to breathe life back into his ailing sports car manufacturing business and beef up his vehicles’ performance with extra American muscle under the hood in the form of the Cadillac V-8. Healey’s game plan predated the legendary Ford Cobra by over a decade, but his more-power strategy was thwarted by GM’s reluctance to sell the scarce Caddy V-8s to Healey because of the engine’s popularity.

Healey met George Mason by chance on an ocean liner voyage from England to the United States in the late 1940s and ultimately cooked a deal that provided Nash’s torquey six-cylinder engine for the two-seater sports cars. Mason predicted that GM would not be able to provide engines for Healey’s cars and offered his company’s six-bangers as a Plan B base engine. Healey accepted Mason’s offer after GM showed him the door.

Healey added an aluminum cylinder head, dual carbs and a few other refinements to the Nash motor and pulled solid performance numbers out of it. The deal between the two car companies involved Nash provision of cosmetic features such as the bumpers and lights, as well as numerous parts of the undercarriage components.

Healey also liked the fact Nash would sell the car as one of its feature models throughout its North American dealerships. Initially, the Nash-Healey had an English sports car body style that was reminiscent of other British sports car models from that era, but the most iconic Nash-Healey design was created by Sergio Pinin Farina in time for the 1952 model year.

The headlight position on the newer Nash-Healey model was closer together than its predecessor and became the most famous edition of the unique sports car during its brief production run from 1951-54.

The brief run of the Nash-Healey was a marriage of convenience between two desperate car builders that threw life jackets to each other while they attempted to survive in the shark-infested waters of the auto industry.

The results were mixed because Healey was able to make a profit from its role in the sports car, but Nash-Kelvinator took a serious haircut on the venture and continued to lose money in the North American market.

The modern term for a lavish and technologically advanced vehicle is “halo car” because these high-end cars represent the ultimate model in an automotive manufacturer’s fleet. A halo car will cost more and is built in smaller production numbers because of its elite stature in the car company’s lineup.

The problem with the Nash-Healey was its halo got tarnished by a struggling car company’s (Nash-Kelvinator) inability to survive-even with the iconic sports car in its lineup.

The only question left to answer. Was a car (Nash-Healey), built through international automotive collaboration, the first American sports car in the early 1950s?