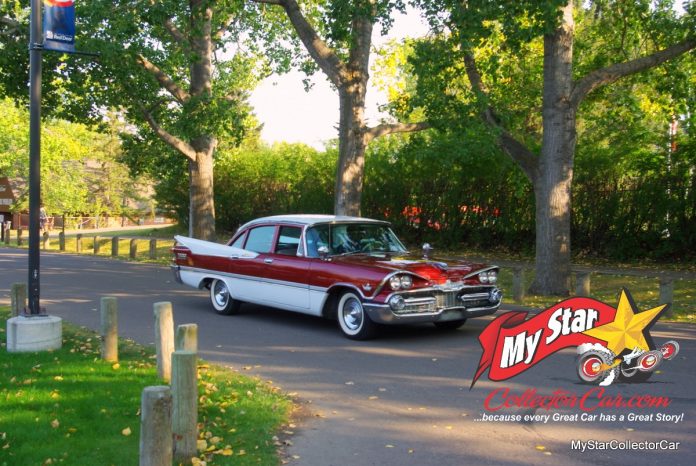 The happiest ending in the car hobby is when a car comes home after a long absence.

This 1959 Dodge Custom Royal four-door sedan came home after decades away from the family who bought it from the original owner.

Brian Short is the proud owner of this family legacy. The story goes back to when a farmer named Alf Strange bought the big Dodge brand new from a local Dodge dealer. Alf never drove the car in the winter because he was a snowbird, so the car only ran up 25,000 miles on the clock.

Luigi Short was Brian’s grandfather and he bought the car from Alf for 600 dollars. Alf had been offered three times the money from the dealer who sold him the car new, but he respected the fact Luigi was a family man, so he honored the deal.

Luigi put more miles on the car, so it had 72,000 miles on it when he sold it to the third owner. That guy didn’t believe the mileage until he tore it down—he regretted it and told Luigi he “wished he would have listened” because the car was mint.

This is the point where Brian entered the equation. He was looking at another car when the deal fell through, so he hit refresh and the ’59 Dodge showed up in his search. Brian thought he recognized the car from the pictures—plus the description and the location matched, so he was really excited to pursue the big Custom Royal.

The car was his grandfather’s, so Brian closed the deal on the car. This is where history repeated itself because the owner was getting seller’s remorse, plus he’d had better offers for the car, but he wanted to make sure the car went to a good home. He saw Brian—a young family man–and his connection to the Custom Royal as a great reason to send the car back to Luigi’s heirs.

Brian admitted he “knew nothing about cars”, but he’s willing to learn. The car had all the usual problems associated with seals and rubber hoses after long storage and there were other details to get the Dodge on the road. The 383 is running like a clock now.

The car has disc brakes up front and new upholstery and paint so it’s a high-end driver quality car. Brian said his eight-year-old son loves the fact the car has no seatbelts—just like it did when Brian was the same age.

Every member of Brian’s family has memories of the Dodge when it was originally part of the family. Brian’s dad Gary remembers driving the wheels off the car in his misspent youth and said he “could chirp the tires at 50 miles per hour shifting into second”.

Brian’s grandmother was amazed when she saw the car again. She told Brian, “You’ve got my Dodge!”, then he took her for a run in Luigi’s old car. It brought back a flood of memories for her

Brian had his own memories–he remembered jumping up and down in the back seat when he was a kid. He also remembered when the car was loaded up and taken away. Brian was eleven then and he recalled how painful the memories were when it left.