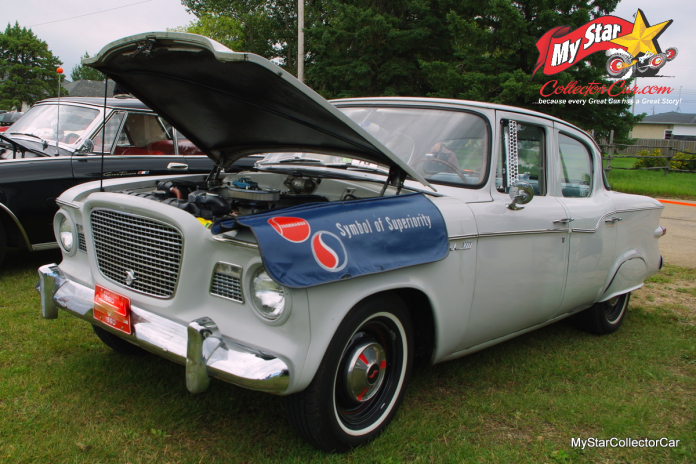 Studebaker was known for its practical approach and its sensible customers.

They slipped in models like the Golden Hawk and the Avanti, but the backbone of the company was building affordable, reliable cars.

Ted Dirksen is the proud owner of this 95,000-mile, four-door Studey because (a) his first car was a ’56 Studebaker Hawk and (b) he wanted to own a 1960 Lark with a V-8. These were typically entry-level cars with no options and a six-cylinder, three-on-the-tree manual transmission. He calls it an SS (Studebaker Survivor).

They were built for cost and efficiency – not luxury. Ted owns a barebones Lark, but it was ordered with the 259 cubic inch V-8 and automatic transmission. It doesn’t even have a radio, but that V-8 was a big deal to Ted. There is no stainless trim on the car, and it has rubber floor mats — the only outward appearance upgrade are the fender skirts.

The Lark is nearly a 100% survivor car, but it did require some repair to the passenger door so the paint is new in that area — the rest of the car is mint. The interior – complete with what Ted called “pullman-ized bench seats” because they recline.

Ted is a huge fan of the Larks because, as he says, “They saved the company”.  The Lark’s timing was good because there was a recession on and people were looking for smaller, more efficient cars and the Lark was a perfect fit.

The Lark had a 2-barrel carburetor and Ted wanted to up the game under the hood, but he is not a “plunk a small block Chevy under the hood” guy. Ted prefers to dive into the Studebaker parts bin for speed equipment, so the 2-barrel was swapped out for a factory-correct 4-barrel and he did other little tweaks like an enhanced Studebaker 2 ¼”  exhaust to get his Lark close to GT Hawk specs.

Ted said the results of these factory-correct upgrades were noticeable because the car is “pretty torquey to start with, but now it has a surprising amount of performance” so it was worth the effort.  Ted likes to drive his cars over long distances, so they have to meet higher standards on the road. He’s had a few adventures because he’s replaced three fuel pumps in a relatively short period of time. Ted believes the “seals aren’t right for today’s ethanol gas” so they get eaten by the alcohol.

Ted likes the Lark’s smooth ride on the road because even though it was considered a compact at the time, it was a legitimate 6-passenger car. The Lark has a wider stance and that translates into a bigger passenger compartment with a better over-the-road feel.

That over-the-road feel is important to Ted because he wants to drive it to a major Studebaker meet in 2021 – a trip over a few thousand miles round trip. He is confident his Lark will make the journey even though it will be 61-years-old next year.