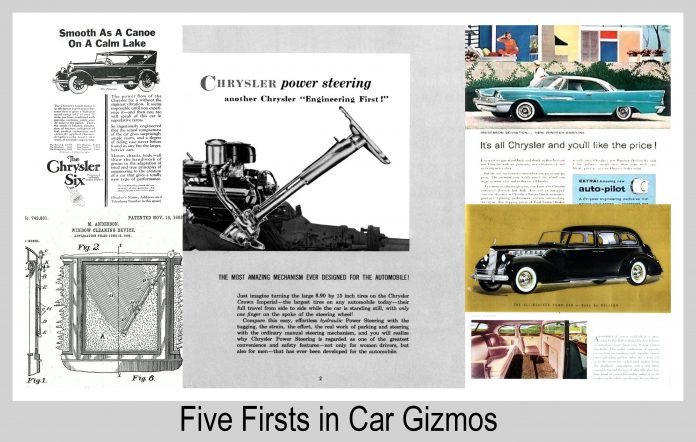 The first in any field is always a noteworthy occasion, whether it’s the first man on the moon (Neil Armstrong in 1969) or the first person to get run over and killed by a car (Bridget Driscoll in 1896 London, UK).

One could correctly assume the brakes on the 1896 Anglo-French Motor Car Company car were not in the same stratosphere as today’s computerized collision avoidance brake systems or else Bridget would have likely lived a long and happy life.

The second advancement for cars took place in the early 20th century when a woman named Mary Anderson observed a streetcar operator’s difficulty with snow and ice on his windshield. She devised a manually operated wiper system that was inside the streetcar and controlled by the operator without the need to stop the car and clear the windshield.

Her idea was adopted by early automobile builders by 1913, including Henry Ford’s famous Model T, although Mary was unable to sell her simple wiper invention to them. However, her concept helped advance the windshield wiper idea to the next level.

Ever wonder why vintage vehicles had factory steering wheels that were roughly the size of small countries? The simple answer is the drivers needed every mechanical advantage available to them so they could turn the wheel on the big beasts because they were built during a pre-power steering era for mass production vehicles.

The initial Big Three domestic car company to offer power steering on production cars occurred in 1951 when Chrysler offered it on its Imperial models and delivered MyStarCollectorCar’s third automotive advancement for our list. The Mopar boys were able to use the Davis system and apply it to their flagship vehicle 69 years ago. Eventually, the power steering feature became a mainstay of the domestic car industry and caused massive steering wheel shrinkage along the way.

The fourth addition to our list is the car builder that offered the first power windows on their vehicles. Technically, the honor goes to the Packard company when they introduced power windows for their high end 1940 180 models, but few buyers were able to afford the luxurious cars after a long bout with the Great Depression.

Ford was able to offer power windows on its 1941 Lincoln Custom models, but these big cars were also closer to limos than basic sedans in the Blue Oval family. Nevertheless, the debut of power window systems for domestic cars took place during the brief window of automobile production before the United States entered World War Two.

The final addition to our MyStarCollectorCar list of automotive advancements is the first production car cruise control system used by Chrysler on its 1958 models that ranged from the Imperial to the Windsor.

The creative mind behind the Mopar system was a blind inventor named Ralph Teetor. He was inspired to design the system when he was a passenger in his lawyer’s car and was irritated by the man’s erratic up-and-down driving habits in terms of speed.

Teetor spent the next several years designing a speed control unit would rely upon driveshaft rpm information relayed to his throttle control system and eventually sold it to Chrysler. No word on whether Teetor’s lawyer bought a ’58 Chrysler.

There were many milestone automotive advancements made over the many years since the first person was run over by a car in 1896.

For this reason, MyStarCollectorCar will revisit this topic at a future date.