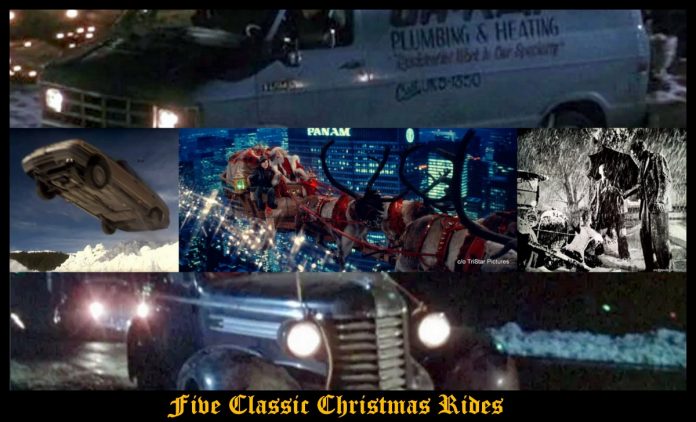 Andy Williams was right because Christmas is the most wonderful time of year, possibly even for car guys who love summer.

MyStarCollectorCar discovered the link while watching National Lampoon’s ‘Christmas Vacation’, a timeless annual tradition in many people’s home at some point during the month of December. Chevy Chase did a masterful job as the comic lead in the movie, but this Chevy was driving a late 1980s Ford Taurus station wagon that was tarted-up with fake wood trim along its side panels.

The cheap exterior on the Ford wagon in ‘Christmas Vacation’ was an obvious tribute to the legendary Family Truckster station wagon used in ‘Vacation’, however the Taurus played a small but important role in the opening sequence of the movie. The Taurus wagon’s misadventures on the road in ‘Christmas Vacation’ were a memorable part of the movie and gave this unloved vehicle a big thumbs-up from us here at MyStarCollectorCar.

The second member of our Christmas car list is the 1937 Oldsmobile four-door sedan used as the family chariot in ‘A Christmas Story’. The stylish Olds even had suicide doors for the young rear passengers to exit the car, including one memorable moment when young Ralphie helps his father change a tire, then scatters the lug nuts in the process, and immediately engages in the rich language of profanity used by many car guys whenever they have a problem.

The ’37 Olds is a very cool pre-war sedan in its own right–but the fact it was a star in a classic Christmas movie elevated the car to a brand-new level for us here at MyStarCollectorCar.

The third member of our list is the 1919 Dodge Brothers touring drop top driven by George Bailey in ‘It’s a Wonderful Life’. The stylish car was used in many sequences during the movie because it was an important part of George’s life and MyStarCollectorCar firmly believes the Dodge Brothers car made his life even more wonderful over the years.

The fourth addition to our Yuletide list is the 1986 Dodge Ram van used by the comic bad guys in ‘Home Alone’, a legendary Christmas movie aimed at kids but embraced by adults since its debut in 1990.A utility van is not the most glamourous vehicle on our list, but it played a pivotal role in the movie because it camouflaged the two would-be thieves when they plied their illegal trade in suburbia during the holidays.

The van made the implausible scenario in ‘Home Alone’ more plausible for viewers and it’s very much a part of the movie’s plotline.

The fifth and final example of famous Christmas vehicles has been used in many holiday movies, namely Santa’s sleigh. Some car guys may question the validity of the jolly fat man’s sleigh on the MyStarCollectorCar list, but we believe exceptions to the rule are necessary for one simple reason.