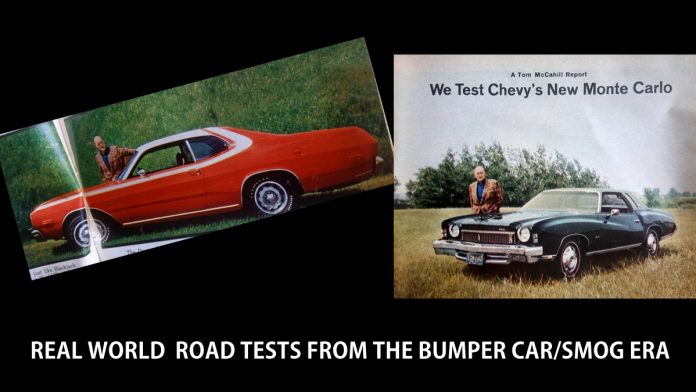 The bumper car era is fondly known as the dark ages for cars because heavy-handed lawmakers handed carmakers a lit stick of dynamite in the early 70s.

These were the bumper car days because bureaucrats stuck Detroit with some heavy-handed laws like 5 mph bumpers and choked-off, smog-compliant engines.

The answer can be found in the December 1972 Mechanix Illustrated when a legendary car guy named Tom McCahill tested a 1973 Dodge Dart and a 1973 Chevrolet Monte Carlo. Long-time MyStarCollectorCar readers know Uncle Tom is an automotive god here at MSCC, so it’s no surprise his road tests were chosen over other magazines from the 70s era.

Tom McCahill never held back at the track – or in print when he tested a car and the ’73 Dart was no exception. Uncle Tom was no fan of smog laws, so he went after them like one of his beloved Labrador Retrievers went after a pheasant. Tom made this clear: “The Dart, in an era of shrunken performance specs, averaged 9 seconds flat for 0 to 60 and got to 100 mph in 21 seconds. Overall top speed was 115-plus. I realize these times are not sensational but these days performance is not a big selling factor at the Detroit nut-and-bolt factories, so anything is decent”.

Tom added this as a closing thought on the Dart’s performance: “In spite of this, the Dart, with its 340-cubic-inch V-8 engine, can outrun the best of the ’73 crop , which in my book, doesn’t necessarily make the Dart the best car coming down pike but simply means the rest of the troops have slipped a lot”.

He was more enthusiastic about the Dart’s handling: “Once on the track, with other cars still running around, I found the weavability top-notch and the power steering as smooth as the fur on Tom-Tom’s ears. He’s my Labrador”.  Tom liked to talk about his dogs.

Uncle Tom treated the ’73 Monte Carlo with the samel brute force honesty. He went after the smog-era performance with the same baseball bat:”Our test car was equipped with a 350-cu.-in. V-8 that had been choked with antipollution equipment to 165 hp maximum at 4,000 flywheel spins. The torque was 280 ft.-lbs., which also is not extraordinary for an engine of this displacement. The compression ratio was 8.5:1”.

He wasn’t a fan of the weaker performance in ’73 cars and he knew where to assign blame: “In the early ‘50s practically every car strained to reach 100 mph. Few made it. Now, again, we’re straining to be over the 100 mark…We were doing 125 without straining a muscle in the mid-‘60s and now, with the pointed heads in Washington all gung-ho on pure air, performance has all but gone down the drain”.

Tom McCahill didn’t waste words on the actual stats for the Monte Carlo: “Right off the bat, the car dribbles down to first in getting to 30 mph from a standstill in 4.5 seconds. It takes 8.8 seconds to reach 50 and 11.5 to hit 60. Zero to 100 takes 34.5 seconds. In other words, as a getaway car for your next bank job, you could do better”.